"Lots of things resonate with today," the actor tells Salon, about the miniseries adaptation of Forster's novel 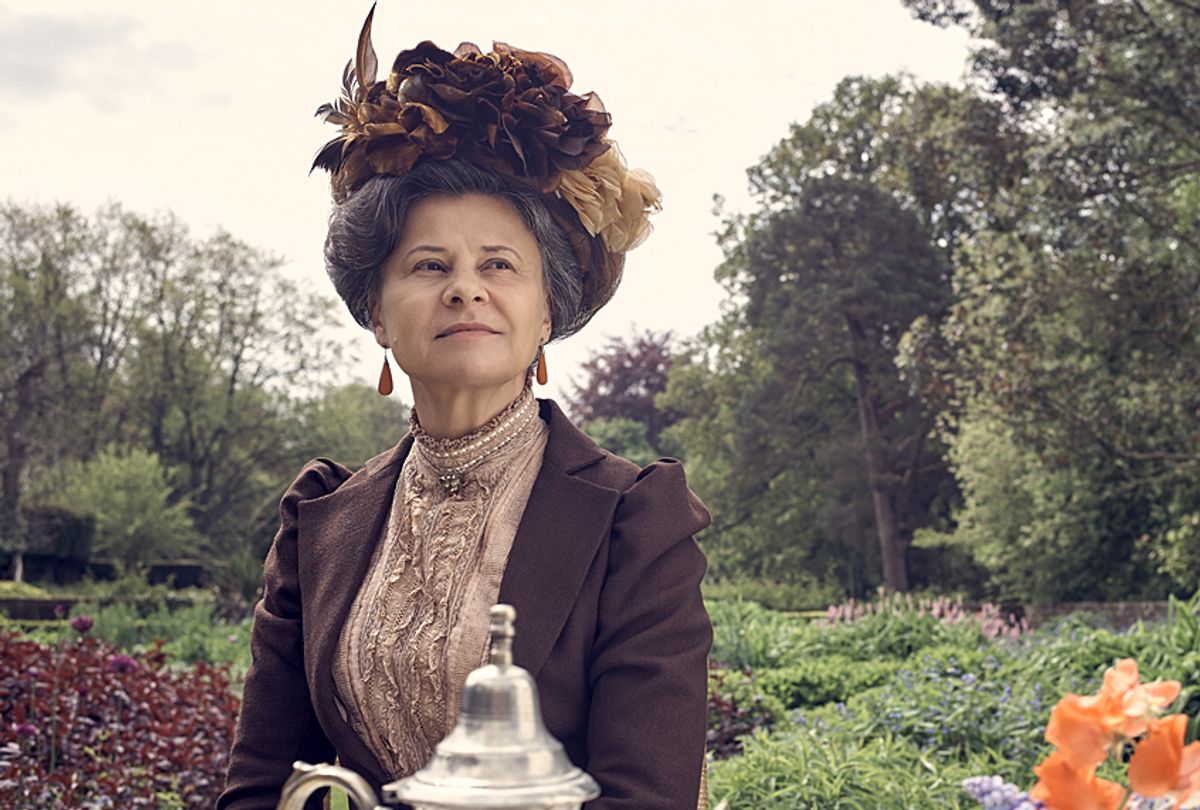 When Tracey Ullman was conducting research in preparation for the role of Aunt Juley Mund in Starz’s four-part miniseries adaptation of E.M. Forster’s “Howards End,” she discovered that her character was one of an ilk: the Forsterian Aunts.

Watch enough Merchant Ivory productions and you’re likely to understand the traits of such a woman. She’s sexless and disapproving of progress, watching over the younger women when they travel in order to keep them out of trouble. It sounds like a miserable fate.

But Ullman wanted to be a Forsterian Aunt. “I had a lot of fun with it, trying to understand these young people from a different generation and just falling short,” she told Salon, prior to the mini-series early April premiere.

Currently airing Sundays at 8 p.m., the Starz version of “Howards End” arrives 26 years after the 1992 Oscar nominated film, but even at such a distance that production casts a long shadow. Part of that is a matter of casting: Americans may be more familiar with Ullman than the actress playing Aunt Juley in the film, Prunella Scales.

Meanwhile Hayley Atwell and Philippa Coulthard, who play Margaret and Helen Schlegel, can’t help but invite comparisons to Emma Thompson and Helena Bonham Carter, the women who played those parts in the theatrical classic.

Yet its impeccable production values and modern updates, courtesy of “Manchester By the Sea” screenwriter Kenneth Lonergan and director Hettie Macdonald, conspire to ensure its 1910 observation of economic divisions and social class feel relevant in today’s world.

The costuming, settings and demonstrations of graces reflect the story’s turn-of-the-century setting, but the amiable Schlegel sisters and the stuck-up Wilcoxes could be two families in any number of places in the U.S., Britain or the Western world.

For Ullman, mostly known for her spot-on characterizations of famous politicians and other public figures, to play Aunt Juley posed a special challenge. “I don't have my props. I don't have my wigs, my make-up, what [I] use so I can dissolve into somebody,” she said. But she was not deterred.

“Why not do it all?” she effused. “I love being funny and I love the discipline of drama.”

In this exclusive interview, the versatile star talks about her enduring affection for Forster’s novel and why the literary classic’s themes remain relevant more than 100 years after its publication. This interview has been edited slightly for length and clarity.

What was your connection to "Howards End" before this? Were you a big E.M. Forster fan?

I just loved the novel as a young woman. You know, you read things time and again during your life and you realized that the themes tend to repeat. It's so about the English class system, and the haves and the have nots. It's a wonderful story. And I'd seen the movie, which was wonderful. But to do four hours of it, gives it a different feel. To be sent the script and read Kenneth Lonergan's adaptation of it was rather thrilling. I love the way everyone's dialogue overlaps. Makes the conversation so naturalistic.

It seems that the naturalistic elements make it more attuned to the filmmaking style of today -- what we're used to seeing in the U.S.. For a long time, many of the period pieces viewers consumed came over to PBS via the BBC.

And who was it that used to sit in that big armchair and explain things? Alistair Cooke!

Right. This “Howards End” looks like a very different take, though. That's great, given your considerable adaptability. Did you consciously approach your character differently than the way she was portrayed in the 1992 film?

There's more in the miniseries for Aunt Juley, first off. I think in the original film — Prunella Scales played Aunt Juley — it was a much smaller role. Throughout the four episodes, it's much more of exploration of the family within it and the family connection with her. Juley, in the film she's called Mrs. Mund. She was married herself, but there's no mention of what happened to her husband. And as I get older, it's lovely to be asked to do things that, you know, 30 years ago or 20 years ago, my heroes like Prunella Scales or Maggie Smith or Judi Dench would have been asked to play.

I started out as a character actress, and yeah, I'm adaptable. I've done my own thing, but I grew up admiring Peggy Ashcroft. Oh my goodness, I just watched her in "Passage to India!" But I've looked back on those performances because I was sort of like a working class girl — not working class as workman . . . my mother would've said "definitely middle to upper class!" But yes, how you speak relates to our class system in England. And how you speak in these things made me nervous. I know I've never done that, you know, the "actress" voice. That interests me because I'm so into voices and accents, so I listened to very early recordings of women from that era.

It was struck by the simplicity of the way people spoke. It wasn't like, "Oh-ho hell-ooo!" you know? When we all met, it was like Hayley [Atwell] kind of set the tone of how we should sound. She's got a beautiful voice and just nobody's sounded plummy or putting it on or actressy. We just sort of felt like an average family.

The Schlegels, you mean. What about the Wilcoxes?

Oh well, if it were present day, they'd be like the more right-wing people that invest in companies that have lots of stocks and shares and are pretty rich, whereas the Schlegels are the more sort of curious liberal-minded bohemians. And then you have poor Leonard Bast, who's sort of the sacrificial lamb, the working-class man who can't get anywhere, stuck in a system.

Hettie Macdonald, our director, just set a beautiful tone for the whole piece. And it wasn't an exaggerated, you know, BBC-style drama. It looks stunning, but everyone looks real. It wasn't perfect. There was a scruffiness, this shabbiness to some of it that I love. Nobody wore any makeup. That's pretty brutal to not wear any makeup when you're sitting at a table like I was, in broad daylight with three 20-year-olds.

Beyond that, there's layer upon layer in the story that resonates even now. You're familiar with it?

Oh yes, it used to be one of those standard books on high school reading lists. But like you say, so many elements of class differences and conflict are timeless. And now that you've been inside Forster's story, what strikes you about the story that resonates with today's culture, not only in the U.S. but in Britain? When the series was in production you were dealing, of course, with Brexit, on top of all the other rightward shifts in Europe, and that has sparked a lot of renewed discussion about class divides.

There's such a huge disparity between the haves and have nots. It still very true in England, that as you open your mouth, you can tell where you're from, what you can aspire to, who you're connected with. And you know, public schools, we've just been through a period of Boris Johnson and David Cameron and George Osborne. It's like an Eton school reunion. And here too, you know, you have to connect yourself up to Ivy League colleges and privilege to get ahead. Economically, we really have gone back to this sort of Gilded Age. So yeah, lots of things resonate with today. And there are characters in the story who don't need to do anything, because they have a trust fund and inherited wealth. And it takes away your ability to make something [of] yourself or to understand the values of things or the struggle.

A lot of viewers in the U.S. know you mostly for your comedy work. And it's funny how people are continually surprised to see comedy actors take on serious dramatic roles.

Was there something about your background in comedy and your extensive mastery of character that augmented your work in "Howards End"?

Well, I started out as a theater actress. My first breakthrough role in America was in "Plenty" with Meryl Streep and, David Hare's play. But I've always wanted to be a character actress. My heroines are Jessica Tandy and Jean Stapleton.

What I do when I play the characters . . . I love "Saturday Night Live," but I think it's just impersonation, you know. The difference is sometimes I like to sort of inhabit the character or imagine another life for them. Like when I play Angela Merkel or I'm Judi Dench, I want to give them another persona, so it's not really a direct impersonation. I'm certainly not doing it because I want to make fun of them or be mean or glib. It's not satire in any way.

I just did a show for the BBC — and all my shows have gone to HBO -- and to be Nicola Sturgeon, Angela Merkel, Theresa May, Melania Trump in a show, is what people are wanting. To be Brigitte Macron . . . I can't believe Trump said what he did! I mean "You're in great shape"? Don't even get me started. Then, to have such dignity in the face of it. Can you imagine what the Macrons said once they got behind closed doors?

That's what I'm doing a lot of now, still, because I think that's what people are really wanting.