Who lives, who cries, who tells the story? Answer: Becky Albertalli, author of "Love, Simon"

A YA author talks diversity, identity and “Love, Simon,” the film adaptation of her novel 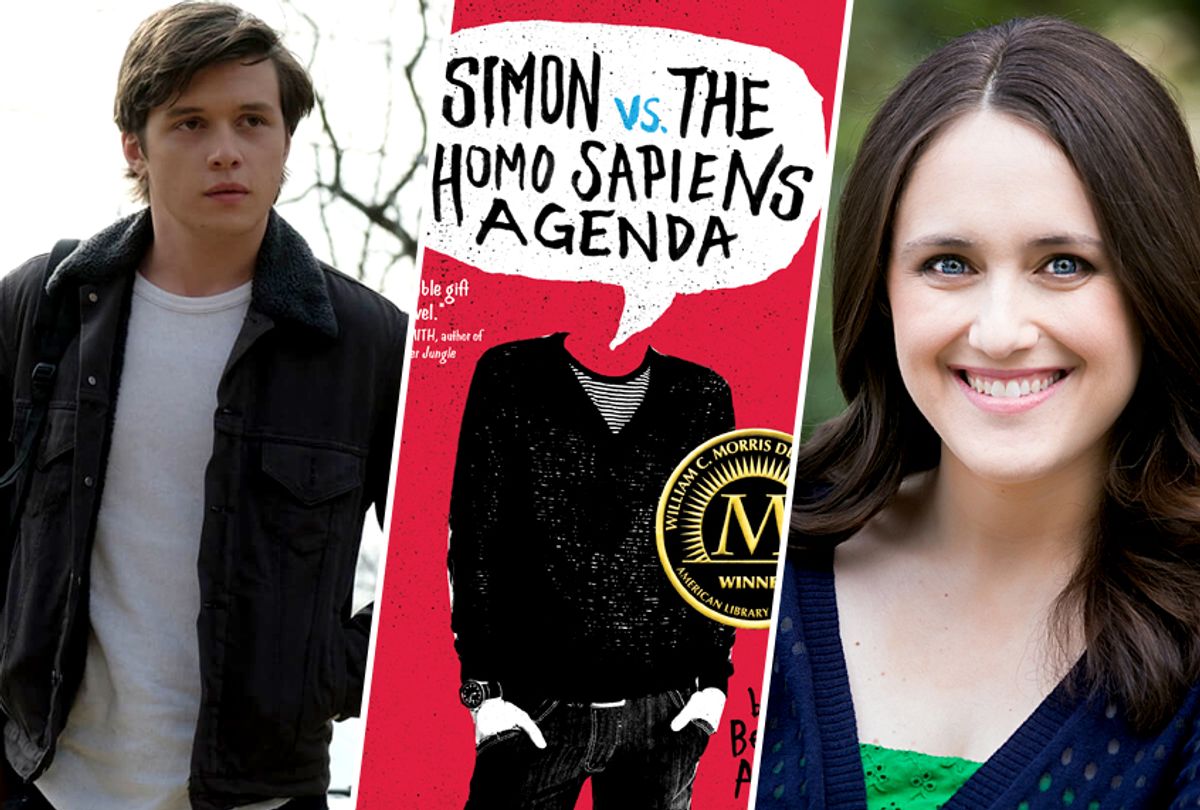 Everything about Becky Albertalli, author of “Simon vs. the Homo Sapiens Agenda” and “The Upside of Unrequited,” is loveable — like your high school best friend, if your high school best friend were a self-actualized cool adult who clapped back at people for being mean to you on Twitter. She is kind, smart, quirky. An Oreo aficionado. She loves “Hamilton.” As a former clinical psychologist who worked primarily with teenagers, Albertalli also has an innate understanding of the adolescent mind and its fundamental obsessions: sex, popularity, iPhones, sugar, yet she also adroitly portrays the quiet desperation and awkwardness that follow us all into adulthood. And when I say all, I do mean all. Maybe this is why so many adults continue to read YA — the pathos and bathos of this universal trope.

“Love, Simon,” the film adaptation of “Simon vs. the Homo Sapiens Agenda,” was released in March. Much in the vein of its predecessor, the film explores themes of identity, acceptance and longing that are synonymous with teen cinema. Yet the POV is that of a self-proclaimed “not-so-openly-gay” 16-year-old, Simon Spier: Nick Robinson (“Everything, Everything”), whose secret epistolary relationship with a boy named “Blue” is forced into the spotlight when an email falls into the wrong hands. Other stars of “Love, Simon” include Katherine Langford (“13 Reasons Why”), Jennifer Garner, Josh Duhamel and Tony Hale.

“I don’t want to oversell it, but it’s going to be like ‘10 Things I Hate About You’” Albertalli tells me over the phone. “Or one of the other John Hughes movies I grew up on!”

What is remarkable about both “Simon vs. the Homo Sapiens Agenda” and its cinematic doppelganger “Love, Simon,” isn’t the coming-out trope, though that is, of course, summarily moving. The real kicker is that there’s now a mainstream coming-of-age-YA-novel-turned-movie about a gay boy. So what that he’s white and burby and his room looks like Crate and Barrel had a baby with Jonathan Adler; Molly Ringwald never had it so good. Film Simon is also bright and extremely endearing. What’s more, Simon’s friend group is diverse in a way that simply is without having to be explained. Rather than fighting to establish identity in a world that refuses to accept them for who they are, they mostly coexist in a suburban miasma of niceness.

Meantime, if you happen to follow YA Twitter at all, one of the early discussions about the film was whether or not it was cliché — it isn’t — but it follows familiar rom-com tropes. Albertalli’s response was to defend not so much her own work or the film, though she asserts the latter as beautifully written and conceived, as much as the importance of a gay teen romantic comedy arriving in a mainstream space where everyone can see it in their neighborhood multiplex. Do only straight people own clichés? And if not now, when?

The second kicker is that Albertalli turns out to be so nuanced in writing a cisgender gay male protagonist when she herself is a cis straight woman -- an interesting factoid in the era of #OwnVoices. Perhaps it’s Albertalli’s ability to capture the essence of the human spirit or her thorough grasp of voice, but both Billy Eichner and Andrew Rannells were among the many celebrities to tout the film on Instagram.

NYT best-selling YA author Adam Silvera (“History Is All You Left Me”) has proclaimed “Simon and the Homo Sapiens Agenda” the book he would have most liked to have read when he was a teen (Eichner called “Love, Simon” the film he would have most liked to have seen). Albertalli and Silvera are “book-married” and have recently finished a companion YA novel, “What If It’s Us,” which comes out in October 2018.

“The whole book started with character,” Albertalli says. “I followed Simon into the story. The easy part of that is what is it like to write a boy. I didn’t set out to make his voice more ‘masculine.’ Simon’s voice is a lot like my own voice. The gay part required more care — writing part of a marginalized community that I didn’t belong to. When I originally wrote "Simon," a sensitivity reader wasn’t a thing, but still — white, gay, boy Simon passed through many, many, many hands!”

Of course, who gets to tell what story, and how, continues either to evolve (or devolve, depending on your perspective). Author Lionel Shriver made the case for write-what-you-don’t-know and was excoriated. On the other side of the aisle, the #OwnVoices movement, founded by author Corinne Duyvis (“Otherbound”) as a hashtag to recommend books by authors who share identities with their characters and promote diversity in the children’s literature community, has since widened its scope to include all of publishing. This begs the question, if it’s so long “Sixteen Candles,” is it hello “Love, Simon?” What’s coming up the pike and who is opening the door? Is it even open? And if so, how wide?

“The conversation has even evolved since 2013 when I originally started writing ‘Simon,’’’Albertalli admits. “It’s not about how there’s one message or one person who can write this story but more how can we boost and lift the story and think about why we are telling it.”

Meanwhile, this same narrative inclusion is evident in Albertalli’s second novel “The Upside of Unrequited,” a coming-of-age story about twin-sisterhood, crazy crushes and first love. Protagonist Molly Peskin-Suso is a Jewish 17-year-old with generalized anxiety disorder and a passion for Pinterest.

She’s also not your typically thin teen protagonist waiting to whip off her glasses in a classic makeover montage. What’s fantastic here, and liberating, is that losing weight is never Molly’s (or Albertalli’s) end goal. Molly’s identity and humanity — Like Simon’s — is more kaleidoscopic and complex than just one action or modifier.

“I never gave a size for Molly,” Albertalli says, her voice wistful. “I’ve been fat since fourth grade and bullied for it, but I still knew I couldn’t represent every kids’ experience. Fat has a range of experiences. I don’t think I could’ve written a positive representation of a fat teen when I was living it. I had to immerse myself in fat positivity. So in a strange way, ‘Upside’ isn’t an #OwnVoices book. It took me two years to write!” she says, laughing. “I rewrote it seven times!”

Whether the entertainment industry as a whole will fillip the sensitivity level and open-mindedness of YA is a whole other discussion. Till then, Becky Albertalli continues to challenge herself as a writer. Her next book, “Leah on the Offbeat,” is out this month. Sometimes it seems she never stops writing. Other times, she puts on her pajamas and fans out on Twitter. At all times, she is a fierce advocate for social justice. There may not be one voice, but there is Becky’s and she owns it.