All you needed to eat well in New York in the 1970s was roasting pan, a hot oven and mob connections 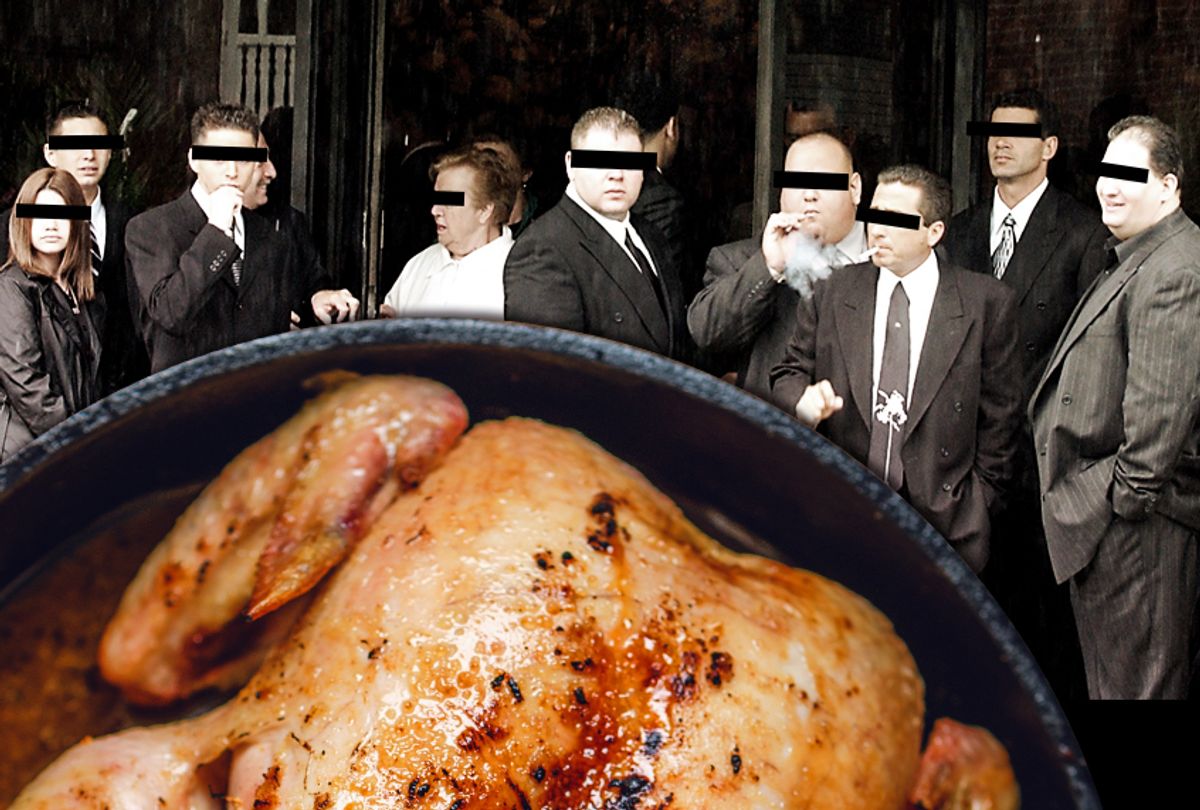 I had one of those European string bags that I used to stick in my pack pocket in the morning, and after I left work at the Village Voice around 6:00 p.m., I would wander the streets of the Village on my way home shopping for that night’s dinner, filling the string bag as I went. There was a fish market on Bleecker Street off the corner of Sixth Avenue, just down the street from Zito’s Bakery, and Ottomanelli’s meats, and Faicco’s pork store. Somebody told me it had been there forever. They had live eels in season, and a big glass case filled with ice displaying the day’s catch fresh from the Fulton Street fish market. Soft shell crabs were often available. For the first couple of years I lived on Houston Street, they went for 25 cents each. Then one week they shot up to 75 cents apiece, and I stopped buying them. 75 cents! Who would pay 75 cents for a soft shelled crab?

Bluefish cost just a quarter per pound, however, so I decided I’d try bluefish instead. The first time I cooked bluefish, it was terrible. It was gray and oily and fishy smelling, and my girlfriend and I managed only a couple of bites before we threw it in the trash. I reluctantly went back to buying flounder, a comparative fortune at a dollar a pound for fillets.

Then one night I was having dinner around the corner from my loft at Rocco’s on Thompson Street, and I saw they had bluefish on the menu, so I asked the waiter if it was good, and he made one of those classic Italian waiter moves, kissing his forefinger and thumb and closing his eyes. “Magnificent,” he promised.

So I ordered the bluefish. He was right. It was light, and fragrant of herbs and lemon and wine, served with boiled new potatoes and flat beans. I couldn’t believe it was the same fish I had bought on Bleecker Street and failed so miserably at cooking, so I asked the waiter how they fixed it.

“Come with me,” he said, heading for the swinging doors into the kitchen. I followed. He introduced me to the chef, and older Italian guy in an apron with a white cloth tied around his head. They passed a few words in Italian I couldn’t understand, and the chef gave me a big grin and headed for the walk-in refrigerator. He emerged with a whole bluefish which he quickly and expertly filleted. He spoke English with a heavy accent, but I could follow him all right.

“You take the fillets like this,” he said, laying them side by side, skin side down, in a black graniteware roasting pan on which he had sprinkled a few drops of olive oil. “Oregano. Not too much,” he said, sprinkling flakes of dried oregano on both fillets. “Now lemon.” He grabbed one and grated lemon rind over both fillets. “Salt, pepper,” he added with a flourish. “Now some wine.” He grabbed a bottle and splashed white wine liberally into the pan around the fish. “You must have hot oven,” he said, opening one of his ovens and sliding the pan inside. “Four hundred . . . five hundred is better.”

I asked him to show me how he had filleted the bluefish, so he went to the fridge and brought out another and more slowly this time, demonstrated how to cut the fish along the backbone and then carefully carve the fillet, cutting against the bones. “Like so!” he said, triumphantly holding aloft one of the fillets.

By the time he had filleted the other side, he declared that the bluefish was done, and removed the pan from the oven. He lifted the fillets onto a plate, cut a couple of pats of butter and swirled them around in the roasting pan with the wine and spooned a little atop each fillet. Handing me one fork, he used another to take a bite for himself and smacked his lips. I took a bite. Like the one I had ordered for dinner, it was perfect.

Over the next few years, I learned more from the guys in the kitchen at Rocco’s. One night, they taught me how to make Zabaglione, the classic Italian dessert made by whipping egg yolks, sugar, and Marsala wine into a froth in a metal bowl over a pot of boiling water.

Years later, I would make use of that skill when for an appetizer at the Millennium dinner I gave in L.A., I served wild mushroom soup with a cloud of Zabaglione floating on top. Another time, the chef gave me Rocco’s recipe for Bolognese sauce, which they made from ground beef, veal, pork and canned Italian San Marzano tomatoes. Still another time, they showed me how they achieved the incredibly crispy skin they got on the roast chicken they occasionally featured as a special. It was all about the oven, the chef said. You had to have a hot, hot oven.

I found a speckled black graniteware roasting pan like the one they used in the kitchen at Rocco’s for $6.00 at the Pioneer Market on the corner of Bleecker and Sixth, and I still have that pan today. Following the chef’s instructions, I learned to heat up the oven in my loft at least a half hour before I made the bluefish or roasted a chicken. It worked. My bluefish was flaky and light, and roasting a chicken at 450 or so took only an hour and came out with crispy brown skin and breast meat that dripped with juices as you sliced it.

The great thing about that old graniteware pan was that you could take it straight from the oven to a burner on top of the stove and make sauce from the drippings, scraping up bits of browned chicken or little flakes of fish skin into the sauce as you reduced it with a little wine in the pan.

That’s the way I learned to cook during those years I lived in the loft on Houston Street. I’d clip the "60-Minute Gourmet" recipe from Pierre Franey and Craig Claiborne The New York Times ran every Wednesday, and make whatever the recipe called for.

One week, they featured Rock Cornish Game Hens a la Diable — split game hens you brushed with Dijon mustard and wine and broiled quickly on one side, then you turned them over and sprinkled with bread crumbs and finished by roasting them at 450 for about 15 minutes. They were served with a sauce made from shallots, white wine, Worcestershire, mustard, tomato paste and cream.

Later, I’d modify the recipe by coating split game hens with Dijon, marmalade and Worcestershire and cook them on a Weber grill, covering the grill and roasting them off the coals so they wouldn’t burn. I still make  Franey and Claiborne’s recipe for green peas and mint, which you can whip up in a skillet on top of the stove with a little butter in less than five minutes. If you look up the recipe, forget the half teaspoon of sugar. The peas are sweet enough by themselves, even the frozen ones.

New York in those days was a different place, and not because you could get soft shelled crabs for 25 cents a piece. The streets in the Village and elsewhere in Manhattan that are now crowded with restaurants had dozens of storefronts selling food you prepared at home. Across Houston Street from my loft, a single block of Sullivan Street had Joe’s Dairy, where they sold canned tomatoes, olive oil, and fresh mozzarella cheese, and not much else; a vegetable market that in good weather displayed what they had on tables outside; a meat market that sold beef, veal and pork; and right next door, a market that sold nothing but fresh chicken – whole, cut up, breasts tied around prosciutto and cheese or stuffed with bread crumbs. At the end of the block, around the corner on Prince Street was Vesuvio Bakery, owned by a guy named Tony Dapolito and his mother. They lived upstairs. People argued about whose bread was better, Vesuvio on Prince, or Zito’s on Bleecker. Trust me. Tony’s was better.

Tony Dapolito was the mob’s political guy in the Village. He was a member of the local planning board, he belonged to the Village Independent Democrats, if the “guys from the neighborhood” needed something done politically, Tony was their man. In the early 1960’s, Robert Moses was flexing his muscles and threatening to build the Lower Manhattan Expressway, a freeway across Canal Street that would have built an elevated highway over Washing Square Park in the Village and wiped out most of Little Italy and Chinatown.

One night, Tony Dapolito picked up Jane Jacobs (author of “The Death and Life of Great American Cities”) and Mary Nichols, the city editor of the Village Voice, the two of whom were leading the opposition to Moses and his insane plan, and drove them to an unmarked storefront on Mulberry Street. Inside sat Carlo Gambino, the mob boss, having a cup of espresso.

Tony served espresso to Jane and Mary, and with Tony standing by, asked them about their opposition to the Lower Manhattan Expressway. They told him of the blocks of Thompson and Mulberry and other streets that would be wiped out, the truck exhaust it would bring to the South Village. When they were finished, Tony drove them home. A few days later, the construction unions came out in opposition to Moses’ expressway. The city government rejected Moses’ expressway in 1964, and his career laying concrete was finished.

Years later, when I was living in the loft on Houston, the neighborhood suffered a spate of daytime burglaries. Somebody was going up fire escapes when people were out of their apartments at work and taking TV’s, stereos, jewelry . . . anything he could grab. Clark Whelton, who was also a staff writer on the Voice, lived on McDougal Street, and a couple of apartments in his building had been hit, along with others on his block.

So Clark and I went to see Tony. He gave a deep sigh and said he knew about the burglaries, that it was a “local kid” who had a drug problem, but “the boys” were looking for him, and they’d find him pretty soon and get him off the streets. In the meantime, Tony told us to take a sheet of paper and write in magic marker “STAY THE FUCK OUT” and put the signature “VINNIE” underneath. Tape the paper to the window leading to the fire escape. That would do it for the time being.

Clark and I both bought loaves of bread and went home and did what Tony told us to do. Neither his apartment or my loft got hit. The bread was delicious.