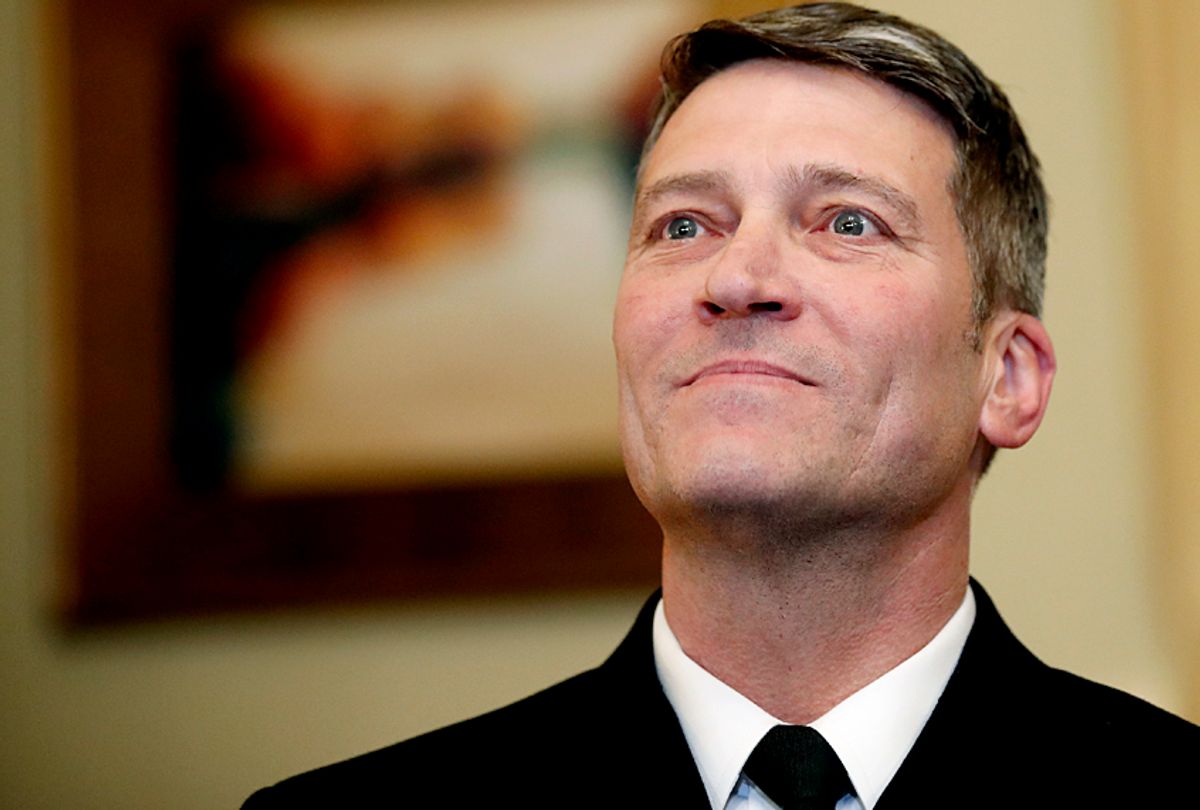 “Unfortunately, because of how Washington works, these false allegations have become a distraction for this president and the important issue we must be addressing — how we give the best care to our nation’s heroes,” Jackson said in a statement provided by the White House press office.

Jackson said that the accusations against him were “completely false and fabricated.”

Within minutes of the announcement, Trump called into Fox News to defend Jackson.

"He would have done a great job, he has a tremendous heart," Trump said of his ill-fated nominee, in a phone call with "Fox & Friends." "These are all false accusations. They are going to destroy a man . . . There's no proof of this. He's got a beautiful record."

Trump also blamed the opposition for derailing Jackson's nomination, singling out Montana Sen. Jon Tester, the top Democrat on the Senate Committee on Veterans' Affairs, for smearing the physician. He said voters in Tester's home state "would have a big price to pay" for his undercutting of Jackson.

"And I watched what Jon Tester of Montana, a state that I won by like over 20 points, they love me and I love them," Trump said. "And I want to tell you. Jon Tester, I think this is going to cause him a lot of problems in his state. He took a man who is an incredible man, an incredible man."

Jackson's withdrawal came after a report released Wednesday by the Democratic staff of the Senate Veterans Affairs Committee summarized interviews with 23 of Jackson's current and former colleagues.

The document described Jackson's "pattern" of handing out medication without patient history (for which he has been nicknamed the "Candyman"), writing prescriptions for himself and contributing to a hostile work environment where there was a "constant fear of reprisal."

Current and former colleagues told Democratic staffers of multiple incidents of drunkenness while on duty, including one where Jackson allegedly "wrecked a government vehicle" after getting intoxicated at a Secret Service going-away party. Jackson told reporters Wednesday at the White House that he had "no idea" where the claim he wrecked a car had originated.

A 2012 report by the Navy's Medical Inspector General also accused Jackson of exhibiting "unprofessional behaviors" and recommended that the U.S. Navy "consider" replacing him.

But the White House has stood by the physician and indicated that he had received glowing evaluations from former President Barack Obama.

“A most impressive leader who continues to perform at the Flag Officer level," Obama said on October 2014. "Ronny has earned my confidence and the gratitude of my family for his diligence and knowledge. Promote to Flag immediately.”

“Ronny does a great job — genuine enthusiasm, poised under pressure, incredible work ethic and follow through. Ronny continues to inspire confidence with the care he provides to me, my family and my team," a 2016 note from Obama read. "Continue to promote ahead of peers.”

"In fact, because Dr. Jackson has worked within arm's reach of three presidents, he has received more vetting than most nominees," she continued. She returned to the vetting talking point repeatedly, saying that Jackson had undergone four background checks, which revealed "no areas of concern."

“Given his unique position of trust and responsibility, Dr. Jackson’s background and character were evaluated during three different administrations,” Sanders said. “Dr. Jackson has had at least four independent background investigations conducted during his time at the White House, including an FBI investigation conducted as part of the standard nomination vetting process.”

"This is, as the president said, Dr. Jackson's decision," Shah said on CNN.  "We stand behind him 100 percent depending on what he decides to do. We think he'll make a great secretary of Veterans Affairs, but this is a nasty process right now."

“It’s quite unusual for a U.S. senator to take allegations that have not been fully investigated, but to flaunt them to the national public to suggest he’s the ‘candyman,’ I think, is outrageous,” he said. "We're standing by Jackson."

Tester, speaking on MSNBC on Wednesday, acknowledged that not all the allegations had been verified.

"Am I 100 percent rock solid sure that he did this? No," Tester said. "But I've seen a pattern here that continues on and on and on."

An aide for the Montana senator pushed back against criticism from the White House, telling CNN Wednesday night that each allegation against Jackson in the two-page document came from multiple sources.

"Every allegation in that document has been brought to us by more than one source," the Tester staffer said.