Trump's tournament of corruption: Mick Mulvaney and Scott Pruitt still in the lead

So much for draining the swamp: In an administration of epic sleaze and corruption, these two guys stand out 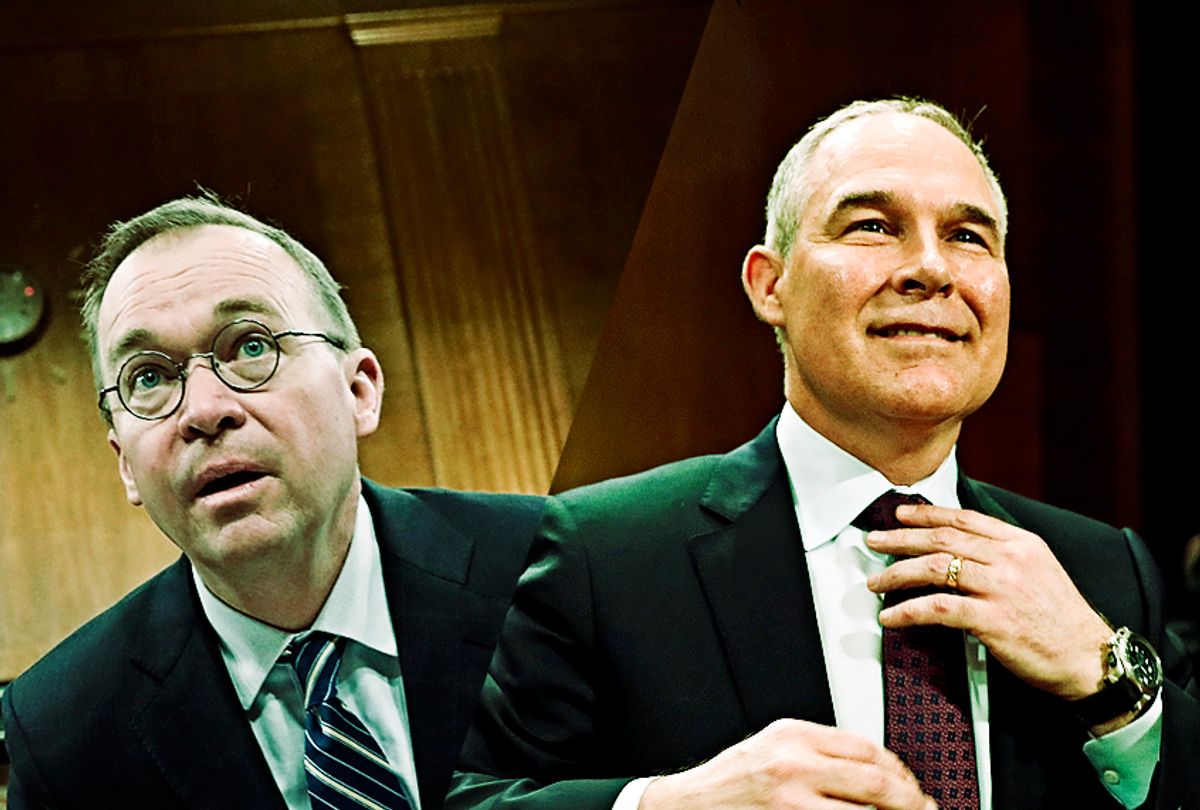 Donald Trump has a habit of stealing slogans and then insisting he made them up. The most obvious is "Make America Great Again," which he blatantly stole from the 1980 Ronald Reagan campaign. (Trump claims he came up with it independently.) When he called himself the "law and order" candidate, he probably didn't realize he was lifting that from Richard Nixon, who used it as one of the all-time most effective racist dog whistles. Trump just knows a good one when he hears it: "America First" goes all the way back to the late 1930s and referred to the isolationist movement that protested any American involvement in the European war against Hitler.

Trump's not the most original guy in the world. But he does have a knack for picking up slogans that have a certain political resonance, even if he's completely clueless about why. All of those make sense for a conservative candidate. But he may have gone too far when he chose "Drain the swamp." That one has been in the political lexicon for centuries, most recently deployed by Nancy Pelosi back in 2006 when the Democrats ran their successful "culture of corruption" campaign. It may very well be the one old slogan Trump should have left on the shelf.

When Trump started using the phrase, journalists and other observers largely assumed he meant he would root out all the lobbying and revolving-door forms of legalized corruption, since that's traditionally what the phrase has meant. In truth, when Trump introduced the slogan in October of 2016, he also proposed a set of ethics reforms:

Reinstate a five-year ban to prevent executive branch officials from lobbying after they leave office and prevent an executive action from lifting it.

Introduce a similar five-year ban on former members of Congress from lobbying after ending government service.

Expand the definition of lobbyists and close loopholes that allow former government officials to label themselves as consultants and advisers.

I'm going to guess you didn't remember any of that. That's because it's pretty much the last time we ever heard about it. Trump never stopped saying he would "drain the swamp," and his voters never stopped chanting it and cheering for it. That's because it came to mean something quite different, which I suspect was what he meant all along: He was promising to drain the government swamp of political opposition, not corruption. In fact, you can say "Lock her up" and "Drain the swamp" in the same breath.

Congressional Republicans have never had the slightest appetite for cleaning up corruption. In recent years, they pretty much institutionalized it. This Sunlight Foundation website, which tracks Trump's overwhelming personal conflicts of interest, shows that since he took office, Washington has become a free-for-all of graft and corruption at the highest level. His administration isn't even trying to hide it.

White House Budget Director Mick Mulvaney, who is also acting director of the Consumer Financial Protection Bureau, gave a speech to a group of bankers this week and basically told them they had to pay to play, right out in the open. This report is from The Washington Post:

He did add that he would always talk to constituents also, which was nice of him.

Mulvaney was basically laying out the terms of a bribe. If you want favorable banking legislation, you're going to need to put up some cash. It doesn't get any starker than that. The fact that this is the man in charge of an agency meant to protect consumers from unscrupulous bankers and lenders (which he loathes and wants to shut down) is just too perfect.

That was just the latest in a string of such stories in the Trump administration, and it's only been 15 months since the inauguration. Setting aside those pertaining to the president and his family, the cabinet is setting records for corruption scandals. We can go from Trump's first Health and Human Services secretary, Tom Price, who spent more than $1 million of taxpayer funds to travel by private jet in the first few months, to Treasury Secretary Steve Mnuchin, who tried to commandeer government aircraft for his honeymoon and is still spending vast sums on travel and expenses, to Interior Secretary Ryan Zinke, who is also dinging taxpayers for expensive travel and wanted to spend $139,000 on a couple of office doors, and then HUD Secretary Ben Carson, who is completely asleep at the wheel but nonetheless found the energy to order a $39,000 table, blame it on his wife and then belatedly admit that he was involved after all.

For all that, there is one high-level Trump appointee who puts all the others to shame when it comes to corrupt practices. That would be the head of the Environmental Protection Agency, Scott Pruitt. From his bizarre requirement for a vast security detail and first-class travel (ostensibly for his own protection) and a soundproof booth in his office to sweetheart deals with lobbyists and donors and excessive pay raises for his favored underlings, it seems there's a new Pruitt scandal every day. But his agency is efficiently deploying a wrecking ball to the environmental regulatory apparatus, so he's had some protection from the GOP's wealthy owners, at least up until now.

But the word is that all the Pruitt bad news is starting to seem like a liability, even to these brazen Republicans. According to The Washington Post, a number of elected officials are becoming uncomfortable with him. Pruitt is scheduled to appear before two House committees on Thursday, and reportedly some members of the White House are hoping he flames out:

Inside the White House, the EPA chief has lost the backing of many senior aides, including Chief of Staff John F. Kelly, and communications officials, lawyers and Cabinet affairs officials, whose calls he ignores. He is not interested in “turning the page,” as one senior administration official put it Wednesday.

The New York Times reports that Pruitt has a strategy all worked out. He has obviously learned from the master. He plans to blame everyone but himself. That's exactly what President Trump would do. And then he'd brag about his grand success at draining the swamp.