This time it's too personal: "James Cameron's Story of Science Fiction"

Like the first season of AMC's "Visionaries," the "Avatar" director's show is very much his story more than history 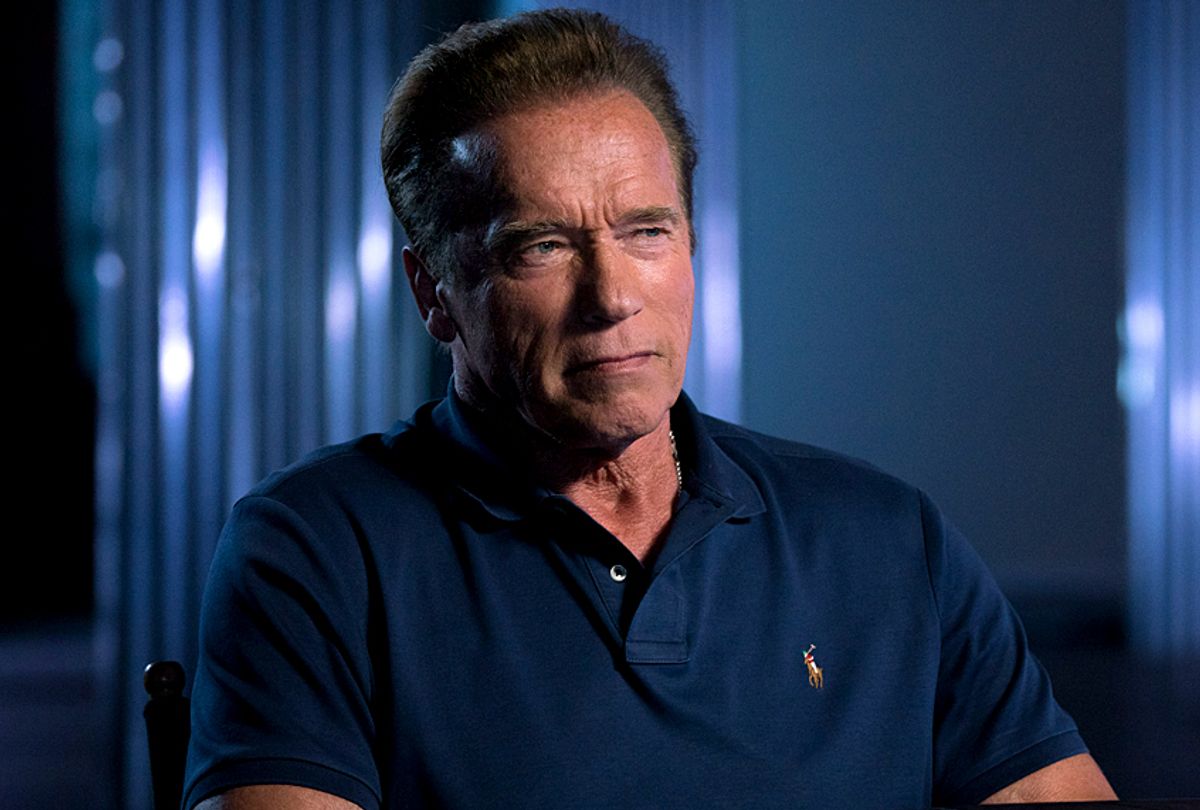 Sci-fi fandom frequently requires a measure of quiet, consistent reconciliation between one's enduring affection for the genre and annoyance at the people creating it. Such musings tugged at the borders of my thoughts while watching “AMC Visionaries: James Cameron’s Story of Science Fiction,” debuting Monday at 10 p.m. on AMC.

Each of its six episodes is an entertaining rehash of modern cinema’s greatest genre hits, or a few of them anyway. Devotees to the “Terminator” and “Alien” franchises should have a wonderful time knocking off to bed with this trip through what Cameron considers to be the standard-bearers of sci-fi entertainment as we know it. His takes are divided into manageable and easy-to-digest segments, starting with “Alien Life” and how concepts of those ideas have been translated by the likes of Steven Spielberg and Ridley Scott.

Cameron also chats with fellow directors Guillermo del Toro, George Lucas and Christopher Nolan throughout the series, as well as a few of the genre’s prominent faces including Will Smith, Keanu Reeves and two actors in whose careers he’s played a major role, Arnold Schwarzenegger and Sigourney Weaver. Certainly there is value to having those stars in the mix if only to enjoy seeing Schwarzenegger admit, “I would have loved to be able to time travel. I mean, imagine to go back and to say, ‘I’m not going to do ‘Hercules in New York.’”

But hardcore sci-fi nerds aren’t going to learn anything new in watching “James Cameron’s Story of Science Fiction.” In some respects, actually, they may question why Cameron chooses to feature a few esoteric film choices while omitting mention of others.

Perhaps the best purpose of this series is to be used as an aid to help non-geeks understand the enthusiasts in their lives. I almost went as far to posit that Cameron’s series could help relative noobs hold their own in party conversations with fans but honestly, that’s usually a losing battle in the best of circumstances. Anyway, if the highest value of this version of “Visionaries” is to celebrate specific versions of entertainment in the most basic way possible by triggering our emotional memories of cinematic touchstones, then Cameron’s “Story of Science Fiction” fulfills that directive to the best of its ability.

Cameron’s ode to sci-fi represents the second edition of  AMC's “Visionaries” series; Robert Kirkman, creator of “The Walking Dead,” served as a tour guide through his “Secret History of Comics” in 2017.

Attaching high-profile names to "Visionaries" grants the series an imprimatur of legitimacy, albeit to varying degrees. Kirkman, for example, isn’t merely one of the comic book industry’s better-known celebrities, he’s the network’s most valued name brand producer. Nerdier and more knowledgeable comic book experts are out there, and there’s a case to be made that Kevin Smith is more famous than Kirkman. But AMC’s executives are amply-aware that most “Walking Dead” viewers have never experienced the musty innards of their local comic book shop and may never do so. And more pertinently, Smith’s comic book series is not the show that’s keeping the lights over there.

Meanwhile, few people if any would question Cameron’s qualifications to helm a multi-episode swim through sci-fi, a genre to which he’s substantially contributed and has a significant hand in shaping, and don't you forget it.

The director has been playing around with television projects for the last few years, mainly filming his adventures manning the deep-diving submersible vessel known as Deepsea Challenger. Concurrently he was also plotting to franchise his “Avatar” series by creating four sequels to the 2009 film, the first of which is currently scheduled to release two and a half years from now December 2020.  It’s never too early to campaign these days, especially in a marketplace dominated by Marvel’s sleeper-hold on that segment.

The topmost limitation of “James Cameron’s Story of Science Fiction” is the fact that it is Cameron’s vision, specific to his tastes, opinions about and comprehension of the genre. He's no fan of the "Avengers" universe which explains, say, the lack of segments about "Black Panther" and the elements of Afro-futurism incorporated throughout. This is acutely noticeable given that two of the experts called upon to lend their opinion to episodes are noted black sci-fi authors Nnedi Okorafor and Nalo Hopkinson.

Cameron would pay lip service to that point, in all likelihood, while explaining that his series focus on high concept films and subject matter. By and large, this approach works best for the seasoned cable movie consumer, people who may sit through 1985’s “Cocoon” and not be put off by the notion that they’re watching a movie about extraterrestrial life forms.

Similarly, the series takes time travel, the subject of its sixth episode, and loops in a discussion about “Doctor Who,” calling upon recently departed Time Lord Peter Capaldi to hold forth on the series. Just in case that’s too nerdy, “Story of Science Fiction” also brings it back around to conversations about why  “Back to the Future” and “Bill & Ted’s Excellent Adventure,” theoretically speaking, could never happen while letting us know that it's perfectly OK to remain in love with both movies.

Cameron values broad appeal over digging deeply to closely examine some science fiction’s taproots. Look closely enough — which, here, only requires you to keep your eyes open — and you may also notice a hierarchy among those Cameron interview subjects. Dean Devlin, the screenwriter of “Independence Day,” is featured, as is “RoboCop” and “Starship Troopers” director Paul Verhoeven. However, Cameron reserves his onscreen passion for his exchanges with Lucas and Spielberg, directors he likely considers to be on his level.

Indeed, the most obvious of Cameron’s touches on “Story of Science Fiction” is his insistence upon inserting himself into his conversations with his fellow A-listers so that we never forget his role in creating the modern science fiction cinematic universe. Somehow he can’t resist making their mutual experience and viewpoint on a specific subject about him and the way he relates to it. For instance, take his interactions with Spielberg, recently the subject of an illuminating and emotionally vulnerable biopic that did much to explain why and how his filmmaking shaped the American moviegoing experience. Spielberg's humility only makes Cameron's mountainous self-regard stand out. What else could one expect from a guy who declared himself king of the world upon winning his Oscar for “Titanic”?

This doesn’t greatly detract from the series as a whole; its still fun to watch cinematic giants trace the genre best known films back to the works of H.G. Wells, Ted Chiang, Arthur Clarke, Robert Heinlein and others. However, I'm not sure that I needed to spend a quarter of the "Intelligent Machines" episode watching Cameron and Schwarzenegger massage one another over the wonderfulness and originality of the "Terminator" franchise.

Upcoming hours devoted to space exploration, monsters, dark futures and intelligent machines all serve this end while skipping through these subjects with a light touch. Television genre aficionados are served well by the series’ inclusion of “Battlestar Galactica” creator Ronald D. Moore as well as Christopher Nolan and Lisa Joy, the minds behind HBO’s “Westworld.” These join the obligatory considerations of iconic installments of “The Twilight Zone” and “Star Trek,” along with other TV sci-fi ephemera.

Even so, it’s difficult if not impossible to overlook who and which subjects are missing from Cameron’s evaluation of the discussion. Whatever diversity of viewpoints on display in the series appears to be inserted, occasionally as an afterthought. Women are represented largely by Cameron’s female leads, such as Weaver and Zoe Saldana. With the exception of notable TV producer Jane Espenson the series features very few female screenwriters and no female directors.

Mind you, only recently have female directors gotten the opportunity to helm high profile sci-fi blockbusters, but one would think that at the very least a series that found a way to wax on about the low-budget 2004 film “Primer” might have take a minute or two to chat with Ava DuVernay about her work on bringing Madeleine L’Engle’s “A Wrinkle in Time” to the screen.

Even Cameron’s ex-wife Katheryn Bigelow could have gotten a mention; she won a Saturn Award for her work on 1995's “Strange Days,”  which Cameron co-wrote and produced. Of course, knowing what we know about Cameron, that's asking a lot.

Similarly it may be silly to wonder why the series doesn't devote more than a few moments to Okorafor and Hopkinson to weigh in on more than just sci-fi cinema’s usage of alien stories as parables to examine man’s inhumanity against man. Future episodes incorporate Smith but for the most part, the minority experience with science fiction receives the most discussion in that first episode.

Afterward the show moves on, checking its boxes by including input from Brown professor  as well as authors Ken Liu and Veronica Roth. To be fair, expert commentary by critics Amy Nicholson and Annalee Newitz  and science fiction professor Lisa Yaszek lend vital context to every episode, preventing "James Cameron’s Story of Science Fiction" from being entirely "stale, male and pale," to use Cameron's own words. Cameron's series could had done a slightly better job at setting a standard for other "Visionaries" to follow.

We've yet to see Eli Roth's "Visionaries" installment on the horror genre, and that may fill in those gaps. At a 2017 Television Critics Association press conference, when the series was first announced, Roth enthusiastically declared, "I want to get Catherine Hardwicke. I want to get . . . Katt Shea . . . Jackie Kong — any woman that’s directed a movie, because there were a lot of fantastic entries." It'll be refreshing to see a look at films from a creator who is enthusiastic about adopting a wider point of view.  Until that happens we'll have to content ourselves with going back to a well many others have dipped into before, albeit with a lesser sense of their own boldness.