Virtually all Missouri Republicans have turned on Eric Greitens amid an ugly sex scandal, but he vows to fight on 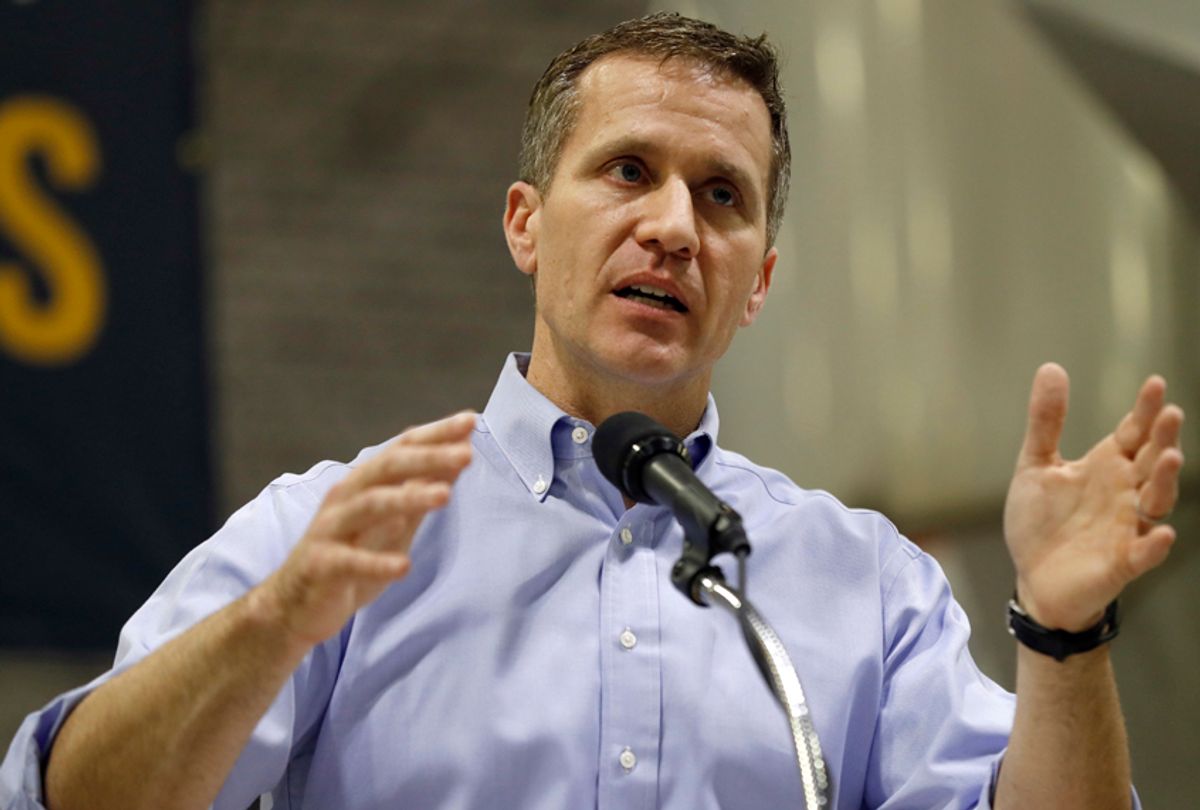 Eric Greitens, Missouri’s 56th governor, comes across as “this perfect guy.” That's what a formerly starstruck hairdresser told the state house committee that investigated allegations Greitens had bound and blindfolded her, took a picture of her partially nude and coerced her into performing a sex act.

Felony charges against Greitens for those allegations and for allegations of computer tampering could help torch Missouri Republicans’ chances of capturing the U.S. Senate seat now held by Claire McCaskill, a Democrat. Winning back the Missouri seat is seen as crucial to continued Republican control of the Senate, since the GOP now has only a 51-49 majority, and strategists believe they may lose two or three seats currently held by Republicans.

Even Donald Trump, the philanderer-in-chief, is distancing himself from Greitens. Vice President Mike Pence, whose chief of staff played a key role in Greitens’ election, has cancelled plans to visit Springfield, Missouri, in May, less than a week before Greitens trial is scheduled in St. Louis.

State Sen. Rob Schaaf, one of Greitens’ many Republican critics in the state, said in a recent speech on the floor of the Missouri Senate that Trump should advise Greitens to resign.

“I believe there is one person who could get this soldier to stand down,” Schaaf said, noting that Greitens was trained as a Navy SEAL. “He’s trained to not walk away from battle. But he’s also trained to listen to his commander-in-chief.”

Greitens, apparently the first sitting Missouri governor to be indicted, appeared about as clean-cut as you can get in 2015 when he announced his candidacy, his first run for office, with his kindergarten teacher nearby.

Greitens, at age 44 the second-youngest governor in the nation, grew up in the St. Louis area. He was in Boys State, the civic training program for high school students that Bill Clinton also once attended. Greitens majored in ethics at Duke University, where he chaired the honor council and was named a Rhodes scholar.

During vacations and breaks, he visited an orphanage in Albania, worked with refugees in Croatia and volunteered at one of Mother Theresa’s homes for the dead and dying in India. Greitens became a Navy SEAL and was sent on antiterrorism missions in Afghanistan, Iraq, Africa and Southeast Asia.

He was awarded a Bronze Star and a Purple Heart, founded The Mission Continues, a nonprofit to help veterans, and wrote best-selling books with titles such as “Resilience: Hard-Won Wisdom for Living a Better Life.” He trained as a boxer and ran marathons.

At his campaign announcement, Greitens promised to attack corrupt career politicians. “I will see you out of the people’s capitol, even if in sight of the statue of Thomas Jefferson I have to throw you down the steps of the capitol myself,” Greitens said.

There were early indications, however, that Greitens was not fully practicing the ethics he had studied at Duke. He changed his online biographies to indicate that he had worked in Bosnia, not Croatia. It may not be coincidental that the St. Louis area has one of North America's largest Bosnian immigrant communities. Additionally, a group of Navy SEALs put together a video questioning some of the details of Greitens’ military record.

Greitens ran as an outsider in the Republican primary but adroitly used millions from nonprofits that don’t have to disclose their donors, to fund his campaign. The American Policy Coalition donated $2 million to a political action committee called SEALs for Truth, which in turn gave $1.975 million to Greitens’ campaign. At the time it was the largest single campaign contribution ever given to a Missouri candidate. Freedom Frontier gave $4 million to a political action committee called LG PAC, which paid for television ads criticizing two of Greitens’ Republican primary opponents.

Greitens, who has a Ph.D. in philosophy from Oxford, likes to mention French historian Alexis de Tocqueville and quote Aristotle’s writings on virtue. But for the benefit of Missouri voters, he fired an AR-15 in a TV commercial. “I’ll take dead aim at politics as usual,” the candidate said.

Greitens met the hairdresser when she cut his hair in 2013, the same year Time magazine included him on its list of the 100 most influential people in the world. She has testified that she knew he was a motivational speaker and had heard about his humanitarian work.

“He found a way to tell me these things, and so I just thought he was wonderful,” she said.

He allegedly invited her to his house on March 21, 2015, and lured her into his basement on the pretext of a workout, according to her testimony to the Missouri committee. He blindfolded her, taped her hands to pull-up rings, ripped open her shirt and pulled down her pants.

Then she heard a noise like he was taking a photo with a cell phone and saw a flash though the blindfold, according to the Missouri committee’s report.

“Don’t even mention my name to anybody at all, because if you do, I’m going to take these pictures, and I’m going to put them everywhere I can,” Greitens allegedly told her. “They are going to be everywhere, and then everyone will know what a little whore you are.”

The woman told the House committee she was uncontrollably crying after he prevented her from leaving. They were on the basement floor when he allegedly undid his pants and put his penis within inches of her face. She performed oral sex on him.

“I felt as though that would allow me to leave,” she said.

Greitens was sworn in as governor on Jan. 9, 2017. Disgraced Silicon Valley investor Michael Goguen, who had been forced to leave his job at a venture capital firm after a sexual abuse lawsuit, sat on the stage. He had given Greitens’ campaign $1 million. At the inaugural ball, Greitens danced to the “Missouri Waltz” with his wife, Sheena.

Greitens refused to say how much he raised for the inauguration and required members of his taxpayer-funded transition team to sign gag orders.

The previous governor, Democrat Jay Nixon, had frequently vetoed Republican-sponsored bills but was often overridden in veto sessions. In his first month in office, Greitens signed a bill that would make Missouri the country’s 28th right-to-work state. Voters are expected to decide the issue after a petition drive to force a referendum.

Greitens called a special session of the legislature to impose more restrictions on women seeking abortions and signed a bill that requires women to meet with a doctor three days before having the procedure. He has also signed a law that makes it tougher for women and minorities to successfully sue over workplace and housing discrimination.

As Greitens helped drive this red state toward ever more extreme conservative policies, he has sometimes feuded with members of his own party. Greitens’ campaign advisers formed another nonprofit, A New Missouri, that published the cell phone number of Schaaf, the state senator who has questioned Greitens’ reliance on money from unknown donors.

During much of Greitens’ first year in office, reporters looked into various tips suggesting that he might have had an affair. Lauren Trager of KMOV in St. Louis broke the story on the night Greitens gave his second State of the State address. An investigation by St. Louis Circuit Attorney Kim Gardner and an indictment quickly followed.

Greitens could face four years in prison if convicted on the invasion of privacy charge. He has resisted calls to resign from prominent Republicans such as House Speaker Todd Richardson and Attorney General Josh Hawley. The General Assembly could call a special session to try to impeach Greitens.

Hawley, who is running for the U.S. Senate against McCaskill, turned over evidence to Gardner, the St. Louis prosecutor, suggesting that Greitens may have improperly used an electronic donor list from a nonprofit for political fundraising. Greitens was also charged with computer tampering.

For his part, Greitens has criticized Gardner, one of the few Democrats to play a role in this story, as “a reckless liberal prosecutor.”

The Missouri House committee investigating Greitens has hired former state Supreme Court Chief Justice Edward Robertson Jr. as special counsel. The ERG Defense Fund, yet another nonprofit, has been formed to raise money to pay Greitens’ legal fees. Billboards tied to a shell company in Las Vegas have been put up attacking Schaaf, the persistent Greitens critic in the state Senate.

McCaskill, who has been considered one of the most vulnerable Senate Democrats in an election cycle that should generally favor her party, could be helped by all Greitens’ troubles. It wouldn't be McCaskill's first great escape: She was narrowly re-elected in 2012 -- when she was similarly expected to lose -- after her previous Republican opponent, Todd Akin, mused about the differences he perceived between “legitimate rape” and other kinds.

Greitens got elected by claiming he "was going to do things that literally no other governor had done,” McCaskill has quipped. “Little did we know it was sex in the basement.”