After women in media rush to defend Sarah Huckabee Sanders, Bee decides "to remind people what feminism is about" 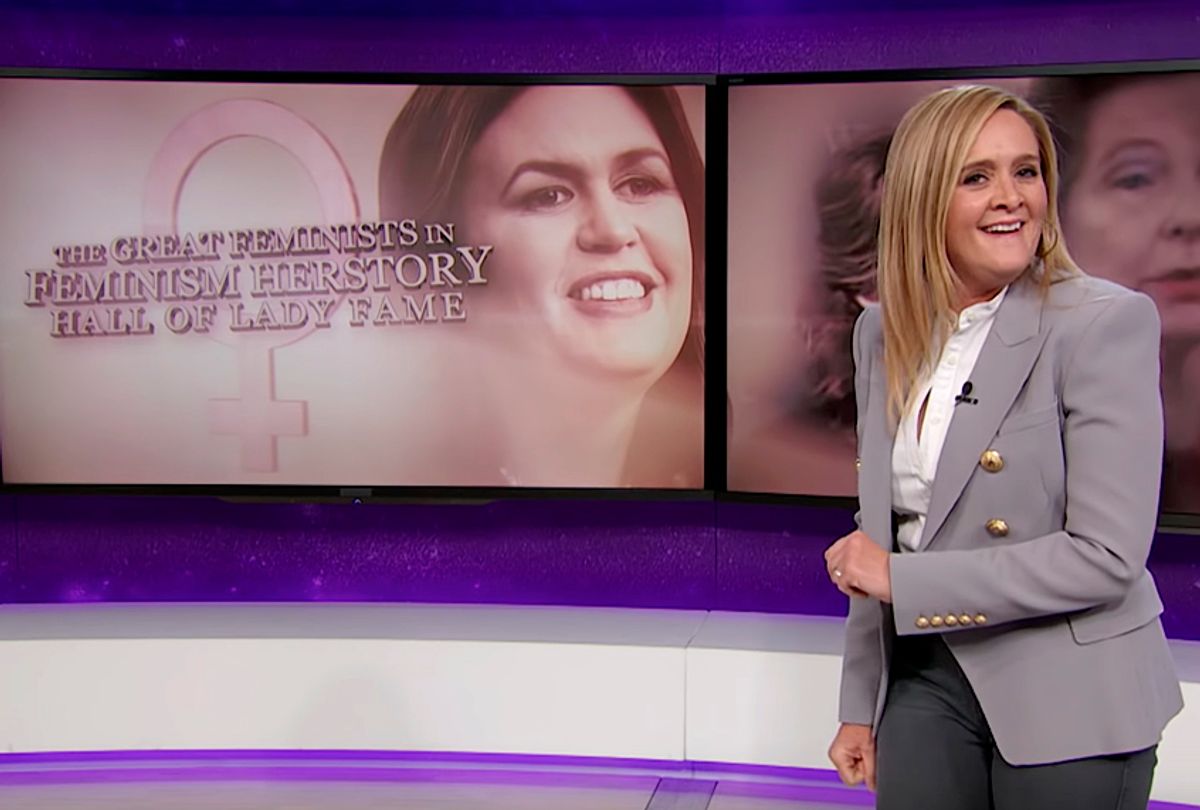 "That [Sanders] sat and absorbed intense criticism of her physical appearance, her job performance and so forth, instead of walking out, on national TV, was impressive," tweeted Haberman.

And Haberman wasn't the only prominent member of the media who pledged support for the White House press secretary. Several big-name female journalists, including MSNBC's Andrea Mitchell and Mika Brzezinski, who called Wolf's jokes "not funny," also followed suit. The anchors both declared that Wolf owed Sanders an apology.

But the host of TBS' "Full Frontal" was having none of it.

"Oh, Mika, very clever to say we can’t make fun of women’s appearances on the same day you wore that hideous goddamn scarf," Bee joked. She then spent the rest of her opening monologue criticizing Sanders' dishonesty during her tenure in the Trump administration, and explained why it is so preposterous for members of the media, of all people, to come to her defense.

"Sarah Huckabee Sanders is a f**king liar! Goodnight, everyone!" Bee exclaimed. "OK, fine. Look, calling Sanders a liar isn’t an insult — it’s her job description. Feminism doesn’t mean you can never make jokes about another woman — ever. If it did, then I couldn’t say that Mika clearly stole her scarf off of Steven Tyler’s microphone stand. And Sarah Sanders is very good at her job."

"But, if the press thinks being called a liar is a huge insult, maybe they should be mad at Sarah herself, since she calls them liars constantly," the "Full Frontal" host continued. "I’m not saying Sarah Sanders doesn’t deserve the protection of feminism. She does, though she's not a feminist, which you can tell from the way she throws other women to the wolves on her boss' behalf."

Bee then praised Sanders' intelligence and savviness when it comes to lying to the press, before comparing her to a "public-relations dementor, sucking the energy out of the White House press until they can’t really fight back, turning them into tragic journalistic husks called Maggie Habermans."

"Seriously, the press, why are you defending this lady?" Bee asked. “She is not your friend!"

Bee explained that Sanders may be easy to defend, because she isn’t a "loudmouth" like Anthony Scaramucci, an "attention vampire" like Kellyanne Conway or an "actual vampire" like Stephen Miller. Yet "she's dangerous, because she’s such a good soldier in the Trump army," the comedian declared.

“So, I salute you, Sarah Huckabee Sanders,” Bee concluded. "You’ve outlasted every man who’s had your job — and almost any other job in the Trump White House — to become one of the most powerful women in the nation. You are a hell of a role model for little girls everywhere, who are smart, and hardworking and completely evil."

Sanders is currently facing heat after Rudy Giuliani, the former mayor of New York City and newest member of President Donald Trump's legal team, admitted to Fox News' Sean Hannity Wednesday night on live TV that the president knew about a $130,000 hush payment made by his personal attorney, Michael Cohen, to adult film star Stormy Daniels in the lead up to the 2016 presidential election. Giuliani said that Trump personally reimbursed Cohen for the "perfectly legal" payment, and his first TV appearance in his buzzed-about new role thus seemed to only cause more headaches for a faltering White House.

Prior to Wednesday, Trump and Sanders had both denied having any knowledge of the hush payment.

On March 7, the press secretary specifically denied that the president had any knowledge about the transaction. Sanders said, "I've had conversations with the president about this . ..  There is no knowledge of any payments from the president and he's denied all of those allegations."

In the wake of Giuliani’s comments on Fox News, Sanders refused to answer questions Thursday morning about the false statements made to the media about the Daniels case.