On Friday, eight workers attended the shareholders’ meeting to raise concerns about sexual harassment at work 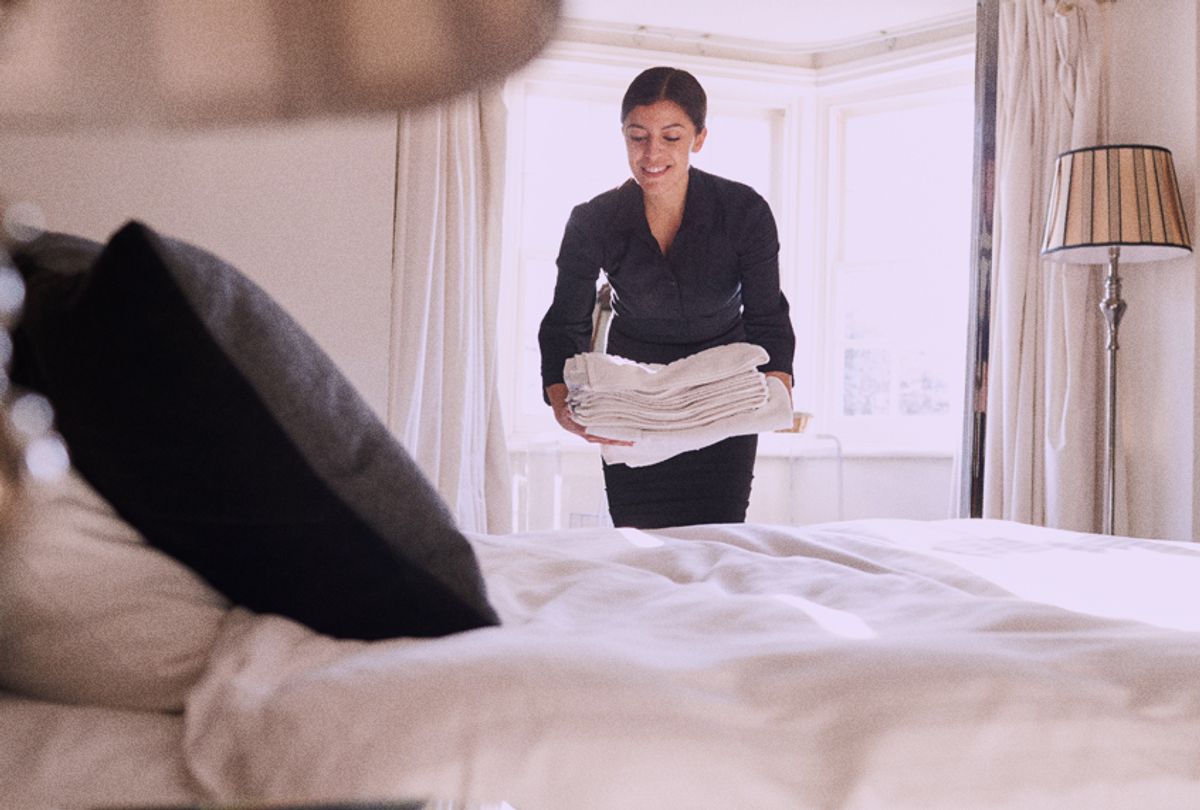 Retaliation is one reason that it is harder for low-wage woman workers to say #MeToo. Many don’t have the luxury, like celebrities in Hollywood, to speak up without the fear of losing their job.

Which is why today might have marked a big step for the #MeToo movement.

On Friday, eight Marriott hotel workers from four different cities flew to the annual Marriott shareholder meeting in Washington, D.C. Their mission? To question top executives on the prevalence of sexual harassment and sexual assault faced by service workers in the hotel industry.

According to Unite Here! spokesperson Rachel Gumpert, the meeting went well, but it is still unclear as to what actions will be taken to better protect workers.

“Overall, the meeting was good. They listened, we met with head of corporate human resources, and we talked to them about the complaints we have in the hotels and he promised he was going to look into it,” Gumpert said. “He said he takes sexual harassment seriously.”

Suzy Elkouarti, who is a cocktail server at a W Hotel in Boston (W Hotels are owned by Marriott International), attended the meeting and said she often feels like she has to choose between her comfort and income at work.

“My experience working in the bar is a mix from mild stuff — men calling me ‘sweetie, sweetheart, babe,’ to men grabbing my arm when taking their order, to guests inviting me back to their rooms,” Elkouarti told Salon.

“Fortunately,” Elkouarti is in a less vulnerable position at the hotel than her coworkers because she is in the “public eye” at the bar, she explained. However, she has not received a formal training—or has been alerted of protocols to follow—if she is sexually harassed or assaulted. She does not feel that there will be any implications for an abuser who is a guest, she explained.

Elkouarti said once was asked for physical proof when she was harassed and told her manager about the incident. A guest had written lewd comments on a receipt — and she wondered, “Why do we have to turn in physical proof? Why can’t you believe women?”

Edith Santos, who also attended the meeting, works as a housekeeper in a Downtown Marriott hotel in Philadelphia. She has been working there for 25 years.

“Right now we are not being treated right,” Santos told Salon.

Santos said she and her colleagues will start working at 8 on a Sunday morning, but they aren’t allowed to leave until they clean 16 rooms.

“We are entitled to a break, but who will take a break when you have all these rooms to clean? You don’t want to get behind on your work,” she said. “It isn’t fair.”

Santos makes a little over $17 an hour; there’s no overtime.

“There is a lot of favoritism, there is sexual harassment, there is mistreatment by the managers,” she said.

While Santos isn’t a survivor of sexual harassment at work — she said if a guest made an advance on her, she would “kick him in the balls” — she did recount a time her colleague was sexually harassed.

“One time she knocked on the door [to clean the room] and a guy said 'come in,' and then he was sitting at the desk, butt naked,” she said. “She said ‘oh never mind’ I will come back, and he said ‘no come here.’”

According to unpublished U.S. Equal Employment Opportunity Commission data analyzed by Center for American Progress, more than 25 percent of sexual harassment charges filed in the last 10 years were in industries with large numbers of service-sector workers. Nearly 15 percent of the charges were filed from workers in the accommodation and food services industry.

Marriott did not respond to Salon’s request for an immediate comment.