Daniels fired back at the comedian, calling her an "ignorant tw*t" for spreading fake news about her career 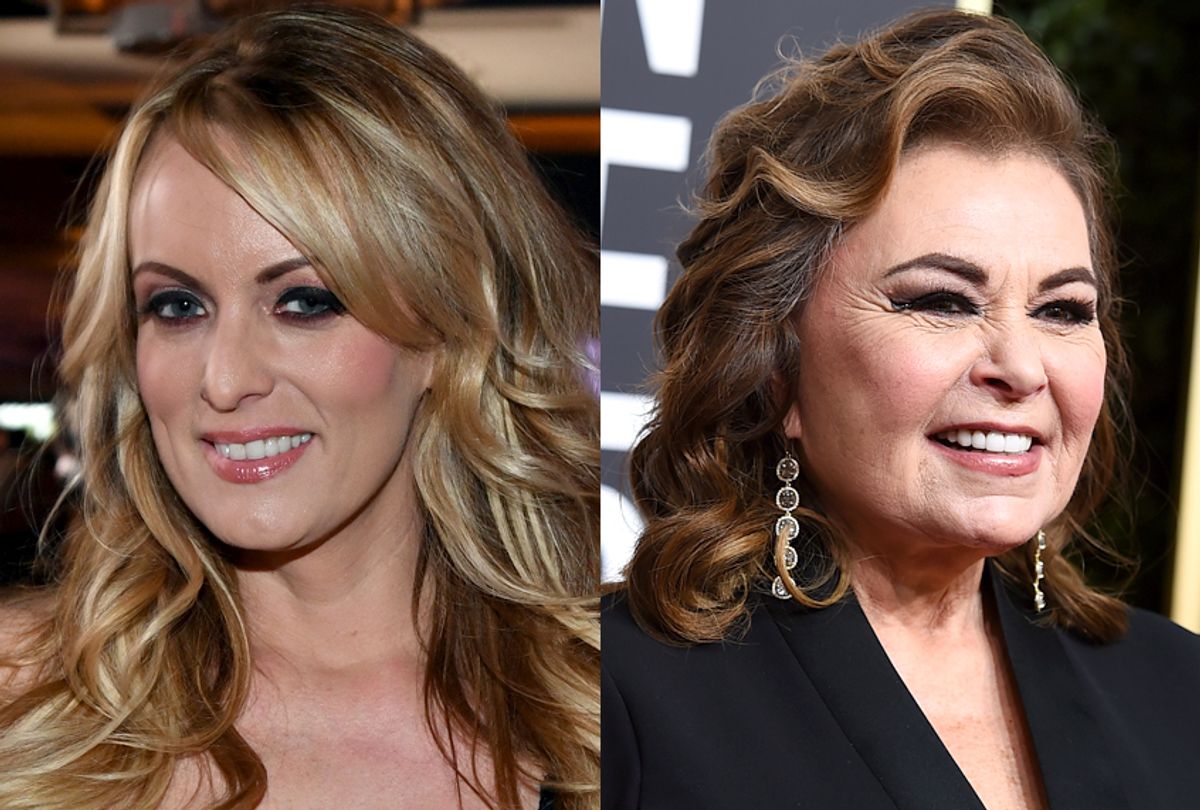 Daniels quickly fired back at the comedian, calling her an "ignorant tw*t" for spreading fake news about her career in the adult film industry.

Daniels' jab at Barr is a reference to the comedian's infamous singing spectacle that occurred when she stepped up to the microphone to perform the national anthem at a San Diego Padres baseball game in 1990.

"But it doesn't really matter. She tried using my job as a reason to discredit me. (Consensual) sexual choices does NOT make someone less of a human," Daniels added.

Another user poked fun at Daniels for calling Roseanne a "tw*t," on the basis that vaginas didn’t deserve to be disparaged by being compared to her.

"Please send my sincerest apologies to your undercarriage," Daniels responded. "It was insensitive of me."

Daniels, who alleged she had a sexual encounter with Donald Trump in 2006 and received a $130,000 hush payment from Trump's personal lawyer, Michael Cohen, just before the 2016 presidential election, has emerged as somewhat of a feminist hero since coming out with her story.

Cohen's effort to silence her via a $130,000 non-disclosure agreement is yet another story highlighting the ugly truth surrounding the struggle many women face at the hands of powerful men. Her attorney, Michael Avenatti, has also revealed that she has been threatened with physical violence, too.

Most recently, Rudy Giuliani, former New York City Mayor and the newest member of President Trump's legal team, said in a sweeping interview with Fox News that Trump had reimbursed Cohen for the $130,000 paid to Daniels.

In addition to contradicting statements made by the president and White House press secretary Sarah Huckabee Sanders, Giuliani's comments appeared to suggest "that payoffs to silence women are so common as to be unremarkable," my colleague Amanda Marcotte notes.

In April, the president told reporters aboard Air Force One that he had no knowledge of the payment to Daniels. And on March 7, White House Press Secretary Sarah Huckabee Sanders had insisted that Trump had not been aware of Cohen's payment to Daniels — at least, that she was not "aware of" Trump having been informed about that.

Now Trump and Giuliani are attempting to to mitigate the damage caused by comments made by the former mayor on Wednesday night.

In a statement released on Friday, Giuliani attempted to "clarify the views" he had expressed two days earlier on Sean Hannity's Fox News program.

"The payment was made to resolve a personal and false allegation in order to protect the President's family," he said. "It would have been done in any event — whether he was a candidate or not."