John McCain “concerned about the state of the country,” Joe Biden says

In an interview with the New York Times, the former vice president underscored McCain's concerns about America 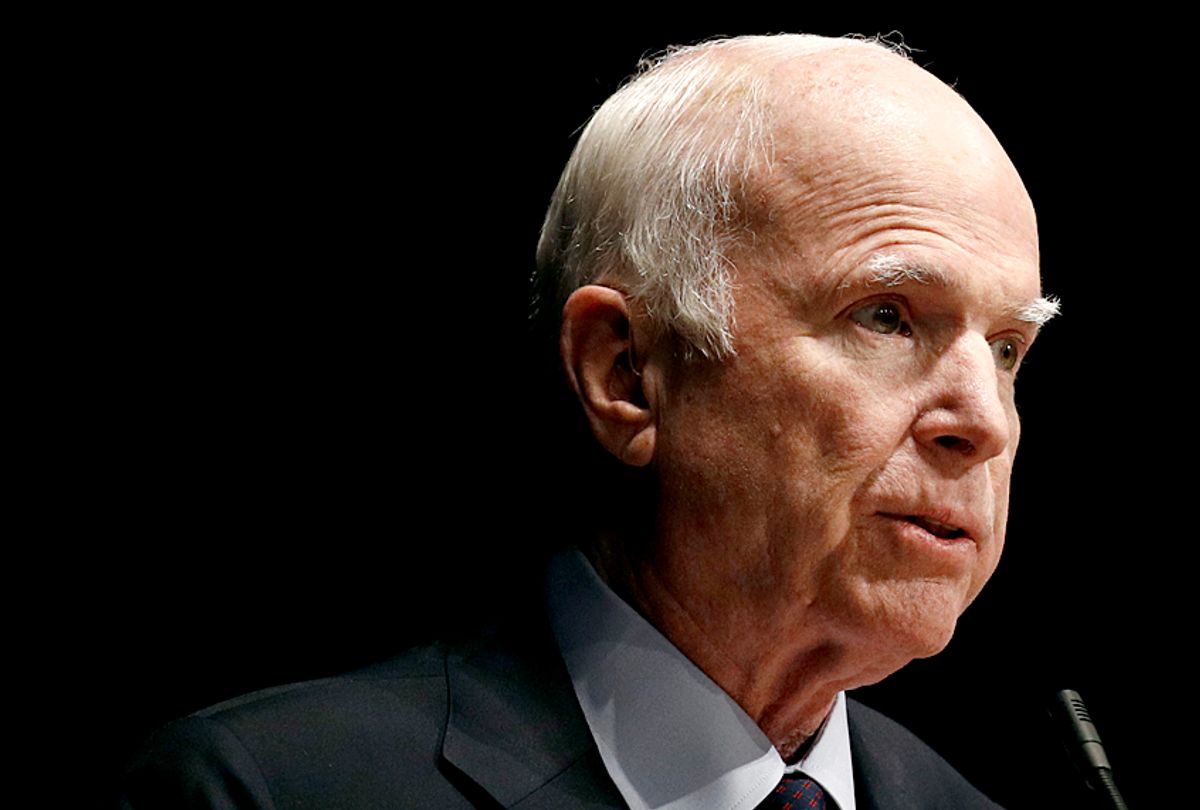 Former Vice President Joe Biden, who served from 2009 to 2017, spent time with Sen. John McCain, R-Ariz., at his Arizona ranch recently where he’s been battling brain cancer. In a somber interview with the New York Times published on Saturday, Biden emphasized McCain’s concerns regarding the state of America.

“Here John knows he’s in a very, very, very precarious situation, and yet he’s still concerned about the state of the country,” Biden said. “We talked about how our international reputation is being damaged and we talked about the need for people to stand up and speak out.”

The Republican reportedly continued to encourage Biden to stay in politics.

According to the interview:

“The Republican senator encouraged the former Democratic vice president to “not walk away” from politics, as Mr. Biden put it before refusing to discuss a possible 2020 presidential run. Mr. McCain is using a new book and documentary to reveal his regret about not selecting former Senator Joseph I. Lieberman as his running mate in 2008. “

Their bipartisan relationship is indeed significant in the age of Trump, one in which the country’s politics have become even very divisive. In another interesting part of the report, it was revealed that the White House has reportedly been told that Vice President Mike Pence is allowed to attend McCain’s funeral—whose funeral service is allegedly expected to be held in Washington’s National Cathedral—but President Donald Trump is not, according to the New York Times.

In the interview, Biden stressed their friendship.

McCain was diagnosed with cancer last summer and was reportedly given a poor prognosis.

Despite his ailing health, McCain has spoken out on multiple occasions against Trump voicing his concerns for the country and GOP. In April, he released a statement criticizing Trump’s strike on Syria.

"President Trump last week signaled to the world that the United States would prematurely withdraw from Syria. Bashar Assad and his Russian and Iranian backers have heard him, and emboldened by American inaction, Assad has reportedly launched another chemical attack against innocent men, women and children, this time in Douma," McCain declared in a statement. "Initial accounts show dozens of innocent civilians, including children, have been targeted by this vicious bombardment designed to burn and choke the human body and leave victims writhing in unspeakable pain."

McCain also spoke up against Trump in August when he launched threats at Kim Jong-un on Twitter.

"I take exception to the President's comments because you gotta be able to do what you say you're gonna do...In other words, the old walk softly but carry a big stick, Teddy Roosevelt's saying, which I think is something that should've applied because all it's going to do is bring us closer to a serious confrontation," he said in a statement. "I think this is very, very, very serious…The great leaders I've seen don't threaten unless they're ready to act and I'm not sure President Trump is ready to act...It's the classic Trump in that he overstates things."