This fascinating BBC documentary, available on DVD in May, takes viewers on a private tour of the "rock chick" life 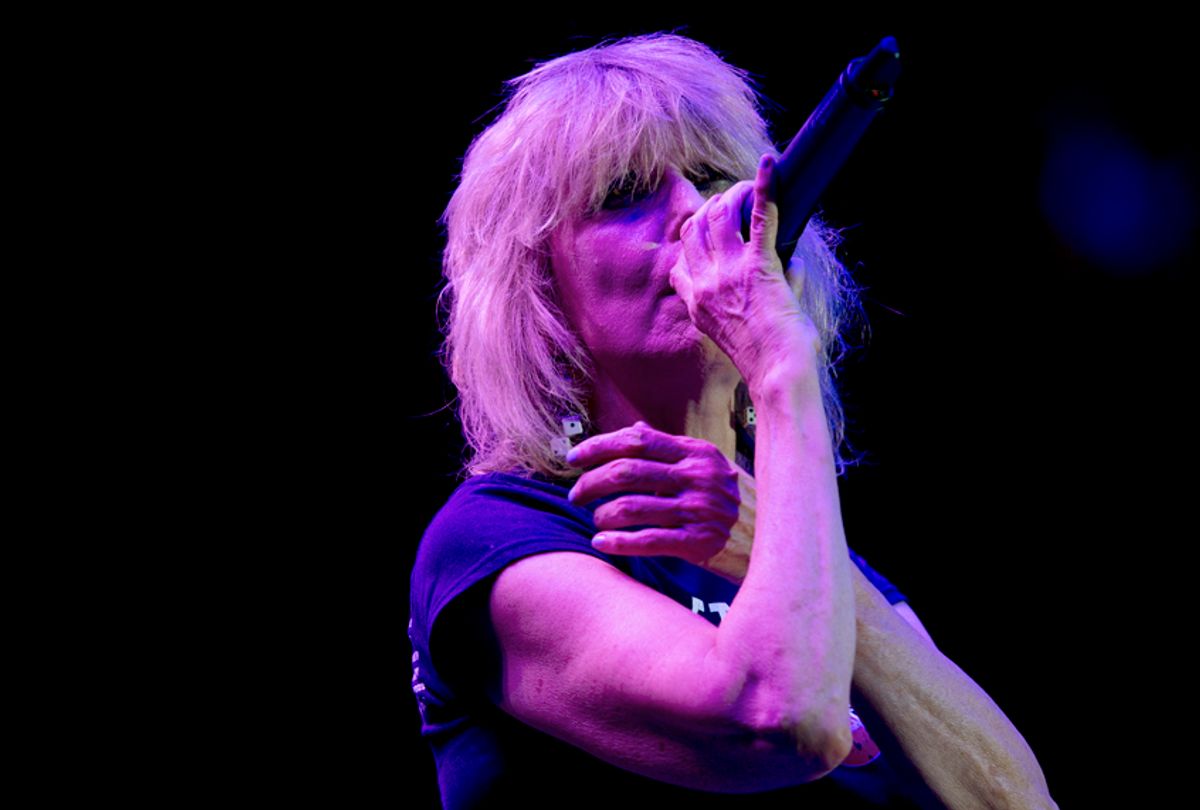 “I am a rock chick,” Chrissie Hynde declares in the new documentary “Alone with Chrissie Hynde.” Her interviewer had demonstrated reticence to use the term for fear that it is sexist or a relegation of Hynde’s talent and achievement. Hynde, sitting barefoot while wearing black jeans and an Elvis Presley T-shirt in her London apartment, smiles and transforms the label into a badge of honor: “Not many people get to be a rock chick.”

“Alone with Chrissie Hynde” originally aired on the BBC and will become available on DVD on May 25. It is an unconventional documentary, as it eschews the predictable format. There is not an introduction to the singer/songwriter — no extended segment on how she moved from her hometown of Akron, Ohio to England and soon founded The Pretenders, one of the most formidable rock and roll bands of the 20th century. There is no commentary on Hynde or her songs, from critics, bandmates or friends.

The documentary honors its title by exercising an approach of mesmeric simplicity. For 95 minutes, the viewer is able to follow Hynde throughout the course of her life — performing on stage in Paris with the Pretenders, painting in her London home, taking a tour bus to Nashville, giving a comically brilliant interview to Sandra Bernhard, milking a cow, giving a tour of her middle class origins in Ohio and more than anything else, walking alone through settings as diverse as the beautiful parks of Europe to the parking lots of urban decay in America, the latter of which Hynde likens to “scenes of Armageddon.”

That Chrissie Hynde is a fascinating and ferocious woman whose strength and self-will enables her to defy category and project an image of effortless defiance, should surprise no one who has ever had the pleasure of listening to her music or reading her memoir. What the documentary is able to offer, rather than a redefinition of the rock and roll legend, is an intimate exploration of her personality and disposition. While in Ohio, she explains that she believes she became a singer because, even though her parents never played music in her home, they kept on prominent display a Julie London record. As London’s “Cry Me a River” plays over images of Hynde humming along, the beauty of Hynde’s vocal delivery, often in collision with the punk-inspired abandon of her music, becomes easily understandable. Footage of The Pretenders performing an acoustic version of “Back On the Chain Gang” is sufficiently graceful and elegant that it acts as hypnosis.

The song should contradict but actually complements renditions of “Gotta Wait,” “Precious” and a British Pub performance of “Thumbelina.” Hynde’s musical identity manages to pull together the personas of punk, alternative rock, Sun Studio rockabilly and the sweet balladeering of Julie London. Her personality is equally complex, yet congruent. She walks through a hotel in Nashville wearing a non-leather biker jacket, frayed blue jeans and pink ballet flats.

When she milks a cow, she discusses how she agrees with the Hindus that those particular animals are sacred, and she advocates for not only refraining from harming animals but actually treating them “with kindness.”

A moment later, the cameras are with her in Bernhard’s studio, capturing her delightfully misanthropic tirade: “Well, there a few tyrannies that are winding me up. The vegan tyranny winds me up. It’s all become about nutrition. It isn’t compassion anymore. The feminists don’t like me. The word ‘empowerment’ winds me up. What is that all about? ‘You’ve empowered me. I feel empowered.’ And I loathe the art world with all its investment and bullshit. I just hate everything. Everyone defines themselves by what they like. I don’t give a fuck. I just wish everyone would fuck off.”

Hynde freely admits that, with the exception of fronting a band, she is not a “team player.” Her resistance to conformity and her refusal to “get drunk on any party line” makes her a case study of solitude.

She is a three-time divorcée with one daughter who has, in her sixties, cultivated a life of few attachments. The documentary’s eponymous song celebrates solitary existence in what Hynde explains is a quiet protest against the dominance of relationship and romance songs in pop culture.

Henry David Thoreau famously advocated walking not as exercise, which he likened to medicine for the sick, but as the “enterprise and adventure of the day.”

Hynde emerges as a rock and roll transcendentalist in "Alone," deriving her purest joy from solitary walks in natural settings – free to think and even talk to herself, or as an honorary ritual for the dead. When she walks through cemeteries, she explains, she often utters the names visible on headstones. “When was the last time anyone spoke their names out loud?” she wonders.

As she recalls her early years in music, explains her philosophy of creativity and delivers blows to cultural convention in an enjoyable matter-of-fact style, Hynde makes for a brilliantly irreverent tour guide through European and American cities.

One cannot help but consider the Pretenders’ masterpiece, “My City Was Gone,” as the documentary provides for easy juxtaposition of London and Akron, Paris and Nashville.

Any list of greatest rock and roll grooves that omits “My City Was Gone” is unworthy of respect, but despite the song’s permanently infectious rhythm, its story is tragic.

Near the end of the documentary, Hynde looks out the widow at a characteristically ugly and banal strip mall in Akron and comments, “This is what America is like from here to California.” A far cry from the beautiful parks and pubs of London and the open air art museum of Paris, Americans took their terrain of impeccable and incomparable natural beauty and regional diversity and transformed it into an endless highway, countless miles of asphalt where weeds sneak out of the cracks, and tasteless store fronts.

As “Alone with Chrissie Hynde” progresses, its subject becomes an avatar for the animating spirit of rock and roll — rebellion and individuality in the service of self-expression through art. She seemed to fit right in while taking a stroll down the Paris sidewalk or through a London park – in America, not so much.