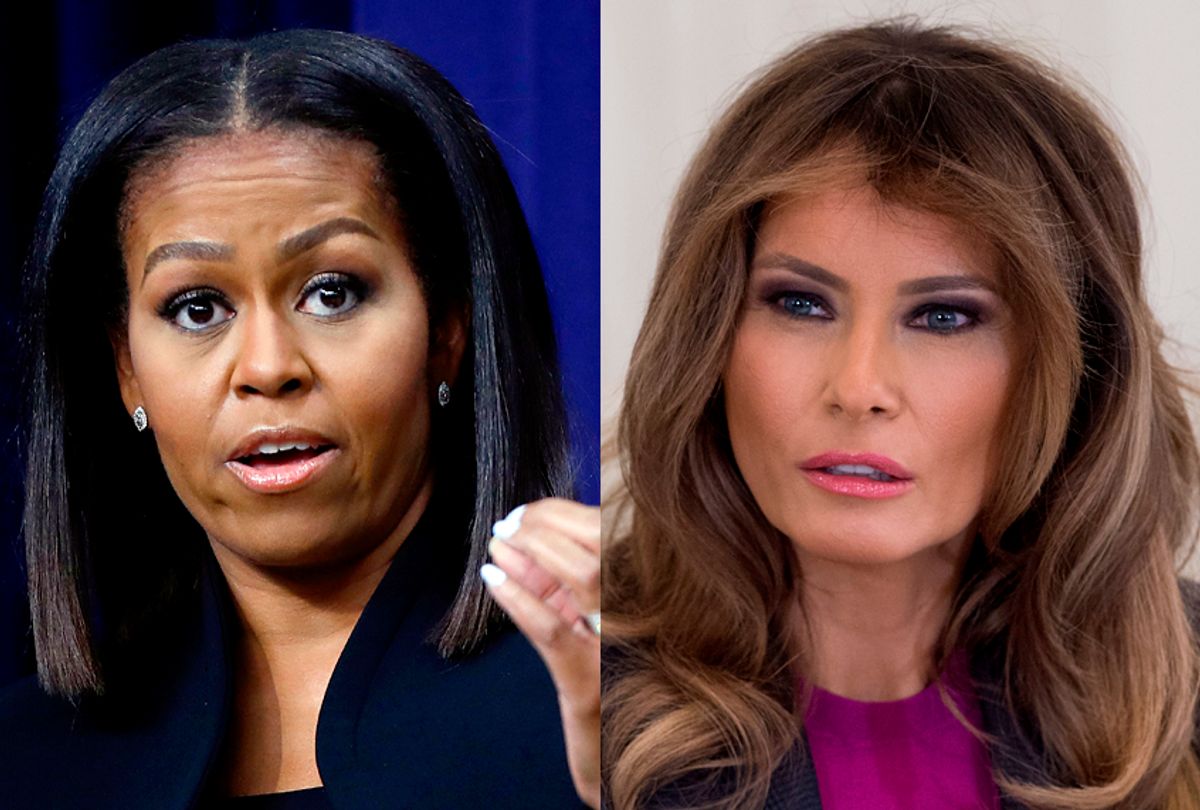 On the same day that first lady Melania Trump committed herself to helping children, her husband proposed major cuts to the Children’s Health Insurance Program and his attorney general made it official U.S. policy to rip children from their parents at the U.S.-Mexico border. Besides the obvious disconnect between the west and east wing of the White House on display, Monday’s much-anticipated rollout became an instant embarrassment for Trump as people quickly picked up on the similarities between her campaign and one championed by former first lady Michelle Obama.

Sixteen months after taking the role of the first lady, Trump unveiled during a Rose Garden speech on Monday that her "Be Best" campaign would focus on three core initiatives: ending opioid abuse, ending cyber-bullying and promoting well-being. But supporting materials presented in conjunction with Trump's youth initiative turned out to have been heavily lifted from a 2014 Federal Trade Commission pamphlet.

As she was announcing her initiative, the White House website launched a page on its official site that said near the bottom: “Parents, click here to read 'Talking with Kids about Being Online,' a booklet by first lady Melania Trump and the Federal Trade Commission.”

Barring a few small changes, Trump’s pamphlet was an almost identical page-by-page printout of the FTC’s Obama-era document, according to Slate magazine. Internet archives show that the brochure was originally shared on the "Be Best" campaign website as a booklet by Melania Trump and the FTC but was later changed to show that it was simply "promoted" by the first lady and written by the FTC. Both PDFs use similar graphics and design, as well as language.

From the FTC document:

Some pitfalls that come with online socializing are sharing too much information, or posting pictures, videos, or words that can damage a reputation or hurt someone’s feelings. Applying real-world judgment and sense can help minimize those downsides.

From “Talking with Kids About Being Online”:

Some pitfalls that come with online socializing are sharing too much information, or posting pictures, videos, or words that can damage a reputation or hurt someone’s feelings.

The original FTC handbook has a heading that reads: “Sexting: Don’t Do It.” The new handbook just says: “Sexting.”

Michelle Obama first proposed the similar "Be Better" slogan at the White House Summit on the United State of Women in 2016, according to Time magazine. When asked by Oprah Winfrey what men could do to help end sexism in the workplace, Obama said, "Be better."

This is not the first time that Trump may have lifted her ideas from Obama. Of course, Trump infamously copied the former first lady’s speech during the Republican National Convention in 2016.