The gift Jerry Falwell gave us: The right to make fun of Donald Trump 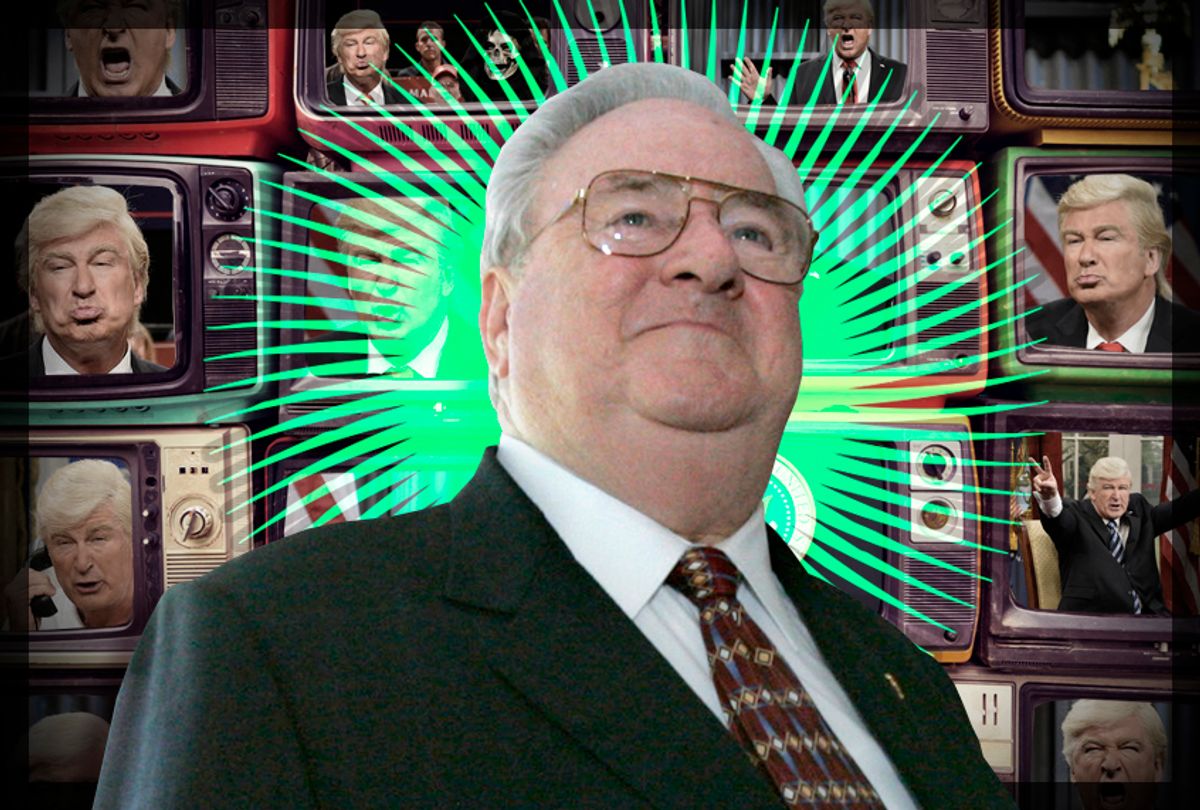 This year marks the 30th anniversary of a Supreme Court opinion that, among other things, gives Alec Baldwin the right to dress up like President Donald Trump and make him look so ridiculous that it doesn’t only make the president look bad, it actually causes Trump to freak out. While we love to take pride in the freedoms afforded by the First Amendment, it's useful to remember that not all speech is protected, especially speech that is considered harmful. This is why, for instance, families of the children murdered at Sandy Hook are suing conspiracy theorist Alex Jones for suggesting that the shootings were a hoax.

So how come Alex Jones can get sued but Alec Baldwin can’t? One difference is that speech directed at public figures is held to a different standard. That distinction came about in a 1964 Supreme Court case, New York Times Co. v. Sullivan. The case drew a line between average citizens and public figures but it didn’t weigh in on comedy mocking public figures. In fact, it would take a case about an outrageous joke aimed at an outrageous man to offer the nuance that is now protecting Baldwin and his fellow Trump-mocking comedians.

In November 1983, Larry Flynt’s Hustler magazine, known for its photos of nude women, crude humor and satire, printed a parody ad. The butt of the joke was Jerry Falwell, the Christian fundamentalist televangelist who famously launched the Moral Majority, a group dedicated to advocating against abortion, pornography, homosexuality and the loss of so-called family values. The ad was modeled on a Campari campaign that featured interviews with celebrities who spoke of their “first time,” playing with the double-entendre of first sex or a first taste of Campari.

In the Falwell parody his “first time” is depicted as starting with a goat in an outhouse. But soon Falwell kicks out the goat and lets in his mother, because "Mom looked better than a Baptist whore with a $100 donation." The ad suggests that he loses his virginity to his mom while they were both drunk off their “God-fearing asses on Campari."

He sued Flynt, Hustler and Flynt’s distribution company for libel, invasion of privacy, and intentional infliction of emotional distress. The first two charges were unsuccessful but Falwell won on the claim of intentional infliction of emotional distress, leading Flynt to appeal. Eventually the case landed in the Supreme Court.

In Justice Rehnquist’s majority opinion, he stated, "The appeal of the political cartoon or caricature is often based on exploitation of unfortunate physical traits or politically embarrassing events — an exploitation often calculated to injure the feelings of the subject of the portrayal.”

Rehnquist then cited the “intentionally injurious” cartoons of Thomas Nast, who launched a graphic vendetta against “Boss” Tweed, and suggested that this type of comedy is an important feature of political speech: “Despite their sometimes caustic nature, from the early cartoons portraying George Washington as an ass to the present day, graphic depictions and satirical cartons have played a prominent role in public and political debate.”

Falwell lost and satire won. The decision helps explain why we are one of the few countries on the planet that allows its citizens to mock those in power and not be punished for it.

Up until the 1988 Hustler decision, the Supreme Court had not weighed in on the particular nature of satirical speech and its connection to potentially causing emotional distress. As Len Niehoff explained in a presentation at a symposium on “The State of Our Satirical Union” at the University of Minnesota, “For those who value freedom of expression, particularly in the form of satire, this outcome set an important and welcome precedent.”

This means that we have to thank one gasbag for making fun of another one, leading yet another one to render a Supreme Court decision that protects us from, perhaps, the biggest gasbag of them all.

When the decision was delivered 30 years ago likely no one imagined that we would be witnessing the Trump era, when our president responds to being the most-mocked man on earth by becoming visibly undone and threatening his critics with lawsuits.

Recall that during his campaign, Trump repeatedly brought up his desire to change U.S. libel laws to make it easier for him to sue newspapers. "One of the things I'm going to do if I win,” he told supporters at a rally, “I'm going to open up our libel laws . . .  So when the New York Times writes a hit piece which is a total disgrace or when the Washington Post, which is there for other reasons, writes a hit piece, we can sue them and win money instead of having no chance of winning because they're totally protected.”

Thankfully, though, as Susan E. Seager explains, Trump may be a libel bully, but he is also a libel loser. Thus far, Trump's speech-targeting lawsuits have failed, she explains, “because the First Amendment protects good-faith reporting about public figures (that is, published without actual malice) and immunizes subjective opinions and jokes, even if they are ‘negative’ and ‘horrible,’ as Trump complains.”

But as the Hustler case proved, public figures can try to go after comedians who mock them for more than just libel. Falwell’s attorneys added the claim of intentional infliction of emotional distress and, if the Supreme Court had not rejected that as a valid claim, imagine the lawsuits our thin-skinned, litigious president would be launching at comedians today. Trump isn’t just the most mocked president in U.S. history; he also wins the award for being the least able to take a joke.

Remember that Trump tried to sue Bill Maher back in 2013 for failing to live up to an "unconditional offer" made on NBC's Tonight Show. The suit took place in the midst of Trump’s birther hysteria when he kept offering money to President Barack Obama if he would produce his birth certificate. Riffing off the absurdity of Trump’s birtherism, Maher offered to donate $5 million to charity if Trump provided a copy of his birth certificate proving that he was not “spawn of his mother having sex with an orangutan.”

That seemed like a pretty obvious joke, but Trump took him seriously and actually sent him a copy of his birth certificate and a list of charities he wanted to receive the money. When Maher didn’t pay up, he sued him.

Maher responded to the lawsuit with this retort: "This is known as parody, and it's a form of something we in the comedy business call a joke," Maher said. "Just like we're the gun country, we're the joke country. We love our free speech and we love celebrities getting taken down a peg. So, Don, just suck it up like everybody else."

Trump later dropped the suit, having been publicly shamed for even bringing it to begin with.

But here’s the catch. Trump really doesn’t seem to be able to tell the difference between a joke and straight speech. In fact, in the description of the parties in the Maher v. Trump complaint, the Trump legal team made a point of asserting that Maher’s “show is not considered a ‘comedy’ broadcast.” Suggesting Maher isn’t doing comedy was a legal move meant to avoid the distinction made between satire and news in the Hustler case and in libel cases that consider jokes opinions, but it also points to the possibility that Trump is truly unable to detect comedy — especially ironic comedy.

Seth Meyers recently revealed that he suspects that Trump doesn’t get humor. Describing his first face-to-face encounter with Trump back in 2004 he explained that Trump “did not strike me as somebody who had ever even processed if something was funny or not.” All that Trump seems to be able to process is whether what is said complements him or critiques him. “If the joke was about him being handsome or rich, he liked it,” Meyers explained, “If the premise was based on his looks or his success, he would say, ‘Oh, I like that.’ But he wouldn’t laugh or smile.”

This, of course, is the exact same stance that Trump takes on straight news. If he likes it, it’s legit. If he doesn’t, it’s fake. This is why he keeps threatening to sue the “fake” news outlets that print anything critical of him.

For Trump, there are two discursive registers: pro-Trump and anti-Trump. That last category should be sued, shut down, or stripped of their credentials. And, while the news media does its best to cover the ridiculousness of the Trump era, it is the satirists who get that political comedy plays a unique role in exposing the farce and fallacies of Trumpism.

As the group of political cartoonists — Pat Bagley, Chip Bok, Mike Peters, Joel Pett, Ben Sargent, Steve Sack, Ann Telnaes, Mike Thompson and Matt Wuerker — who came together to talk about the legacy of the Hustler case at the University of Minnesota symposium made clear, we may well have to thank Falwell for being able to get away with mocking Trump.

Luckily, for us, Jerry Falwell’s own inability to take a joke protected our ability to keep making fun of our nation’s biggest joke yet.