What happens when you rent out your house to the Beastie Boys?

They raid your closet — and make a masterpiece 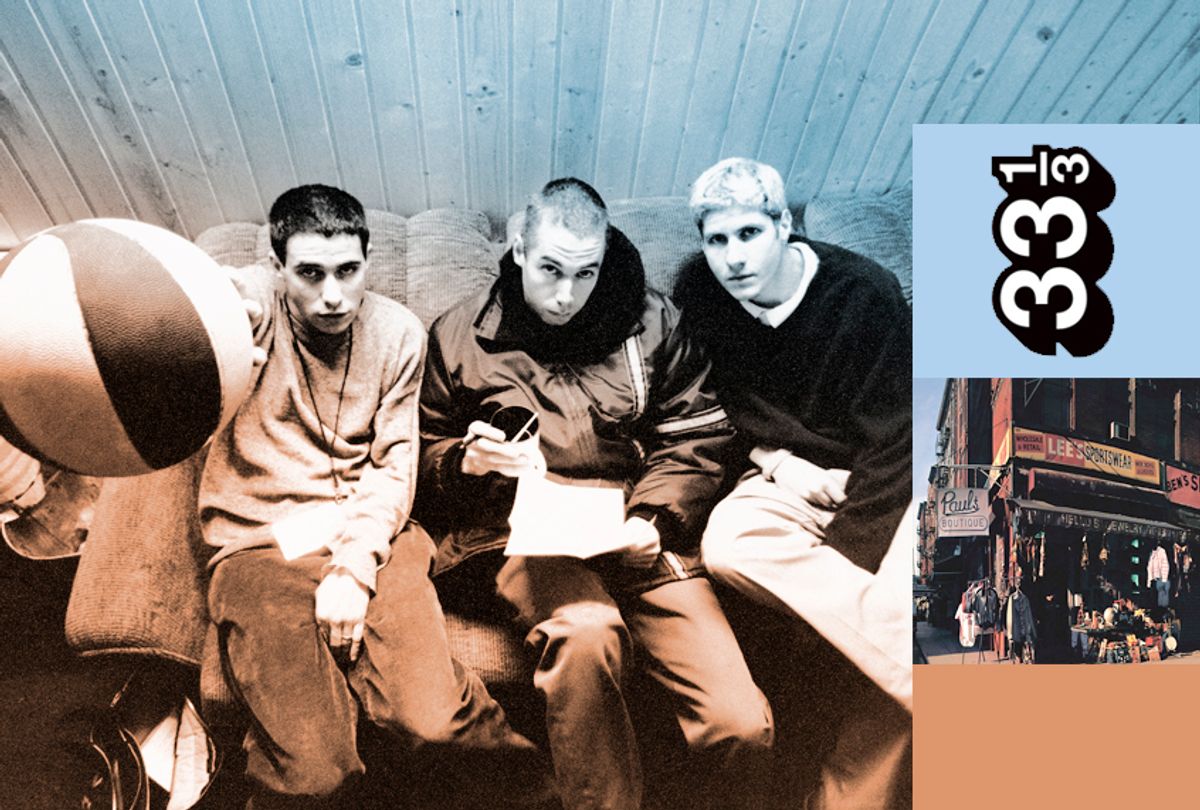 In fact, an argument can be made that the one-bedroom house on Torreyson Drive, owned by Alex and Marilyn Grasshoff, actually provided the Beastie Boys some much-needed stability at a time when "Paul's Boutique" was threatening to get lost in a morass of recreational drug use and hotel bills. If nothing else, the $11,000 rent the band paid each month still beat the cost of three $200-a-night hotel rooms. "It never had occurred to us that you don't have to live in a hotel," admits Diamond with a laugh. "But I think we had all become more serious about thinking, 'OK, we've gotta finish this record.'"

The property offered a view of all the major movie studios and the Griffith Observatory, while the band's neighbors would have included actress Sharon Stone; the old Errol Flynn estate (later owned by singer Justin Timberlake), was close by on Mullholland Drive. A less glitzy, but still important, benefit was the large gold "G" on the front of the house, making the location's new nickname both perfect and inevitable.

When they attempted to rent from the Grasshoffs, the Beasties' reputation—for once—did not fully precede them. As Marilyn Grasshoff remembers it, "The agent didn't tell us anything about the Beastie Boys. He said they were three young men who were writers."

The Grasshoffs would soon learn the rest of the story. "When I said, The Beastie Boys are living in my home,' people said, 'Oh my gosh, you let them in your home?!' Because they had made this movie where they trashed this house," says Mrs. Grasshoff. Once again, "Fight for Your Right (To Party)"—via its video—had come back to haunt the band. "And of course, I don't watch those kinds of movies, so it made me a little nervous. Maybe we made a mistake."

It was not as if the Grasshoffs were unworldly rubes. Alex Grasshoff was a producer and director who had helmed episodes of "The Rockford Files," and "ChiPs," as well as several films, including the Emmy-winning 1973 documentary "Journey to the Outer Limits." His wife, better known under her stage name Madelyn Clark, owned a Los Angeles studio, which A-list musicians would often rent for tour rehearsals.

The couple, who traveled frequently, also had experience turning their home over to showbiz personalities. Actor Bill Murray had lived at the Grasshoffs' in 1980 while playing gonzo writer Hunter S. Thompson in the film "Where the Buffalo Roam." (Thompson himself stayed in the guesthouse.) And even rocker Jon Bon Jovi had once been a tenant, pleasantly surprising Mrs. Grasshoff with his tidiness and good manners. "He was very good to the house," she recalls.

Speculation to the contrary, she would say the same of the Beasties. "What happened was, they were absolutely clean and neat," she says, "and took care of the place very, very well." However, the Beasties would be the last tenants to rent the Grasshoffs' home. The band had wanted to extend the lease, Marilyn Grasshoff recalls, "but my husband said, 'No, I want to come back home.'" The trio would still recall the Grasshoffs fondly in the 1998 song "The Grasshopper Unit (Keep Movin')," comparing the couple to Thurston and "Lovey" Howell from "Gilligan's Island."

Of course, the Grasshoffs were also not aware of the activities taking place in their absence. The foremost attraction happened to be Mrs. Grasshoff's closet, which yielded, as Ricky Powell remembers, "Crazy, crazy seventies shit. Fur coats. Crazy pimp hats. Platforms. Lots and lots of velvet." Mike Simpson, who also got a good look at the collection, observes, "I don't think she ever threw anything away." It was this gold mine of a wardrobe that would give the Beasties—in particular, Mike D—much of their retro look for the "Paul's Boutique" era.

The trio managed to get a Ping-Pong table into the house—chipping Mr. Grasshoff's Emmy Award in the process. They also made frequent use of the home theater system, rare for its time, and what Mike Simpson remembers as Mr. Grasshoff's "huge collection of prison movies." [producers Mike] Simpson and John King, who had access to the house even when the Beasties were away, spent as much time there as possible.

"Despite the fact that John and I had success from the Tone-Loc and Young MC records, we still hadn't seen a dime. We were sharing a $600-a-month apartment, and we had to step over bums to get into our building, and we were digging in our couches for loose change to buy a burrito at 7-Eleven," Simpson recalls, laughing. "So the G-Spot offered a lot of luxuries that we weren't accustomed to." Yet the only truly crazy thing King noticed there "was a bunch of late teen/early twenties kids hanging out in such a mackadocious—yet dated—pad, partying."

"They didn't trash the place the way they trashed a lot of other places," admits regular guest Sean Carasov, who had seen more than a few accommodations wrecked by the Beasties. "But they worked it." Perhaps the worst bit of damage the band inflicted on the G-Spot, however, wound up having a unexpectedly beneficial effect. A wooden gate, smashed into by Mike D's car, would be repaired by Caldato's friend Mark Ramos-Nishita—later a valuable musical collaborator as the keyboardist Money Mark.

Although Diamond commandeered the home's master suite, while Yauch set up shop in the video room, it would be Horovitz's underground bedroom in the guesthouse, with its window into the swimming pool, that became the G-Spot's best-known feature. Ricky Powell would shoot the inner sleeve photo of Paul's Boutique through this porthole, capturing the Beasties clowning underwater.

Darryl "D.M.C." McDaniels, founding member of RUN-D.M.C., breaks down why he thinks hip-hop has a generational divide