The internet recommended the Fox News star take a history lesson: "Can someone bring Tomi Lahren to Ellis Island?" 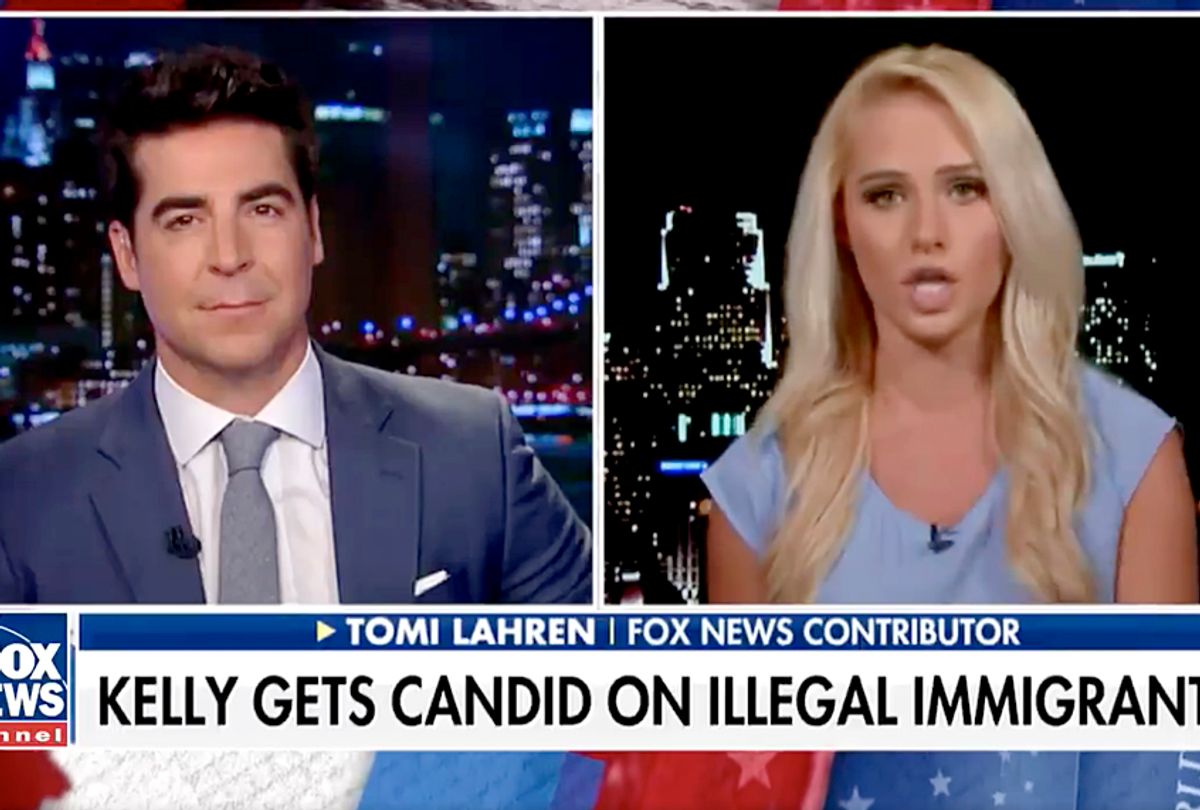 Fox News contributor Tomi Lahren is back in the headlines for offering up fresh historically inaccurate and inflammatory political commentary. This time, her vitriol was aimed directly at immigrants.

"These people need to understand that it's a privilege to be an American — and that's a privilege that you work toward. It's not a right," Lahren said Saturday during a segment on Jesse Waters' "Watters’ World". "You don’t just come into this country with low skills, low education, not understanding the language — and come into our country, because someone says it makes them feel nice. That’s not what this country is based on."

"The fact that we care more about feelings and kinship over actually improving the United States of America is the problem," she continued.

Lahren's comments were delivered in defense of President Donald Trump's Trump's embattled chief of staff John Kelly, who told NPR last week that undocumented immigrants were "not people that would easily assimilate into the United States, into our modern society."

"They’re overwhelmingly rural people. In the countries they come from, fourth-, fifth-, sixth-grade educations are kind of the norm," the retired general continued. "They don’t speak English. Obviously, that’s a big thing . . . They don’t integrate well. They don’t have skills."

As The Wrap pointed out, a poem engraved on the Statue of Liberty reads: "Give me your tired, your poor, your huddled masses yearning to breathe free." But Lahren is famous for her far-right hot takes – and not for checking her facts. Unsurprisingly, Twitter came through with a fact check.

Walter Shaub, who formerly served as the director of the Office of Government Ethics,  said he would trade Lahren, whom he referred to as "Xenophobic Rage Barbie," for a hard-working immigrant any day of the week. "Contributing less than nothing to this country, she exists only to make lazy white supremacists 'with low skills, low education, [barely] understanding the language' feel nice," Shaub tweeted.

Many others encouraged Lahren to take a history lesson. "Can someone bring Tomi Lahren to Ellis Island?" tweeted Ian Bremmer, a global research professor at New York University.

But Lahren only doubled down Monday, alleging on Twitter that 62 percent "of households headed by illegal immigrants are receiving some type of federal assistance." She added, "Does that hurt your feelings? Too bad."

And on "The View" Monday, the ABC show's co-hosts responded pointedly to Lahren's remarks.

"When did the perception of immigrants go from people trying to find their American dream to isolated freeloaders?" co-host Whoopi Goldberg asked. "Because, true, people have always come from other countries . . . Many of them are well-educated and well-versed in many things, but not necessarily in English. And, when they got here, they became peddlers, or they became people that opened small stores."

Co-host Joy Behar interrupted. "She talks about low skills — what exactly are her skills?" Behar asked to rousing applause. "Does anybody know?"

Co-host Sunny Hostin brought up research a genealogist had conducted into Lahren's family background, who found generations of her kin who spoke no English following decades of living in the U.S.

"She doesn’t even know her own history. She certainly doesn’t know this country’s history," Hostin added. "What happened to, 'Give me your tired, and your poor, and your weak and we’ll welcome you with open arms?'"

As of Monday afternoon, Lahren remained unmoved by the criticism. "The Left can't fathom the idea of merit based immigration," she proclaimed on Twitter. "Get a clue. It's not radical to place Americans first in our own country!"