The Four Horsemen of evangelical hypocrisy: How they whitewashed Donald Trump

Instead of speaking truth to power, these evangelical leaders are using proximity to power to their advantage 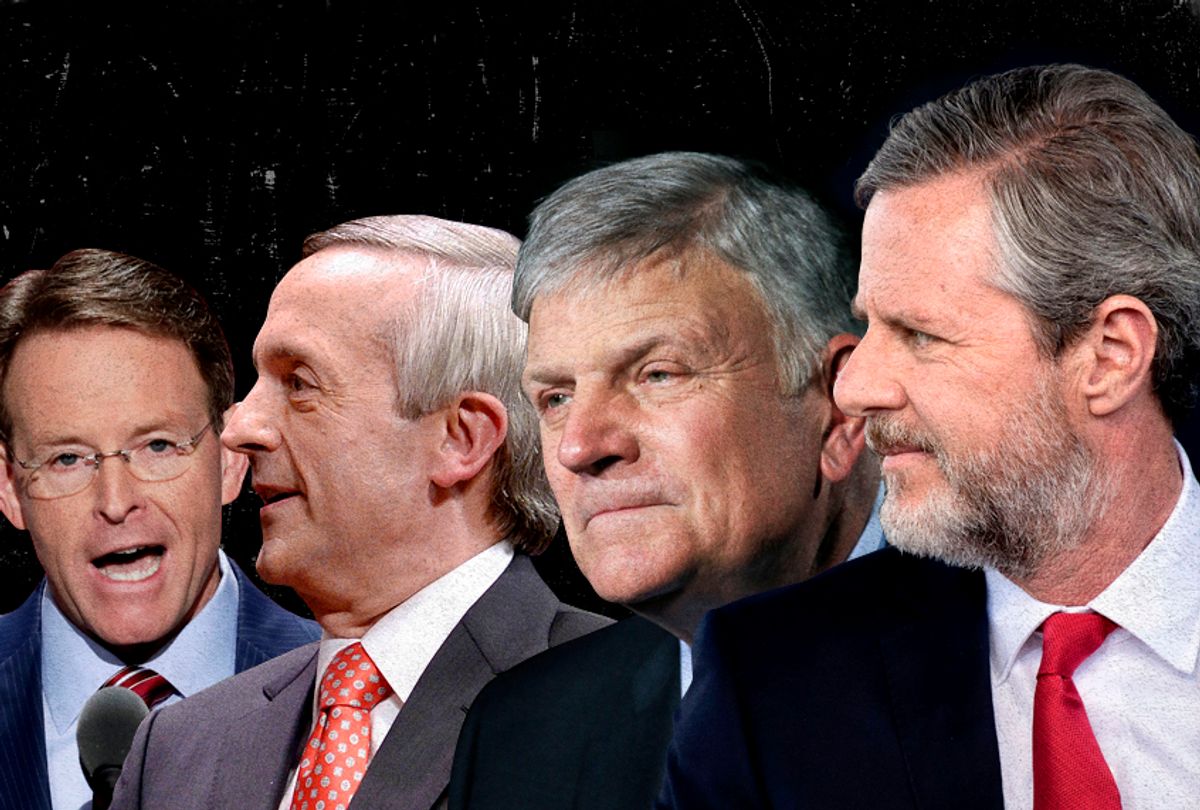 This week’s opening of the U.S. embassy in Jerusalem is another reminder that Sen. Margaret Chase Smith’s “Declaration of Conscience” speech, an early denunciation of the evils of McCarthyism in the 1950s, still remains politically relevant, particularly to the Republican Party in the age of Donald Trump. Smith decried the lack of leadership that she believed could result in “national suicide” and urged her Republican colleagues to maintain their political integrity and intellectual honesty: “I don’t want to see the Republican Party ride to political victory on the Four Horsemen of Calumny — Fear, Ignorance, Bigotry, and Smear.”

Smith’s speech alludes to the “Four Horsemen” of Revelation 6:1-8. In its biblical context, these horsemen serve as apocalyptic images of God’s judgment awaiting humankind in the end times. Her four horsemen, though, are human-inspired pestilences damaging both the Republican Party and the United States.

Smith’s biblical imagery makes the speech especially applicable to a certain subset of the Republican Party — white evangelical Christians who support a president whose life exemplifies everything Jesus’ teachings oppose. But for some white evangelicals, the ends justify the means. For example, since many of them believe that the restoration of Israel with Jerusalem as its capital is one of the factors leading to the end of the world as portrayed in the Book of Revelation, it is no accident that two white evangelical pastors offered prayers at the opening of the embassy in Jerusalem.

The Four Horsemen of Rationalization

Donald Trump rode to political victory on all four horses of Calumny — Fear, Ignorance, Bigotry and Smear — but his white evangelical enablers provide religious rationalizations for all of them.

Franklin Graham believes that God intended Donald Trump to be president, and he remains a vocal defender of Trump, even after many scandals that normally would offend Christian morality (e.g., Stormy Daniels). Graham admits that Trump is not “President Perfect” but declares that Trump has a “concern for Christian values” and “a concern to protect Christians whether it’s here at home or around the world.”

Jerry Falwell Jr. announced, “I think evangelicals have found their dream president,” citing the close relationship between the White House and “faith leaders.” He also declared that it “is no longer relevant” to complain about Trump’s temperament or behavior not being “presidential,” since Trump had “single-handedly changed the definition” of presidential because he was “authentic, successful and down to earth.”

In addition, Falwell defended Trump by comparing him to King David: “God called King David a man after God’s own heart even though he was an adulterer and a murderer. You have to choose the leader that would make the best king or president and not necessarily someone who would be a good pastor.”

In fact, the prophet Nathan condemned King David for his adultery with Bathsheba and the murder of her husband, Uriah, and David confessed his sins.

Robert Jeffress’ bigoted remarks are legion, and he also vigorously supports Trump and his policies, including Trump’s vulgar slur against Haiti and African nations and his harsh, restrictive immigration policies (e.g., Jeffress said that God “is not necessarily an open borders guy”).

Tony Perkins famously told Politico that as far as Stormy Daniels was concerned, white evangelicals gave Trump a “mulligan.” Perkins also stated that white evangelicals “were tired of being kicked around by Barack Obama and his leftists. And I think they are finally glad that there’s somebody on the playground that is willing to punch the bully.” When asked about that pesky turn-the-other-cheek teaching of Jesus, Perkins replied, “You know, you only have two cheeks. Look, Christianity is not all about being a welcome mat which people can just stomp their feet on.”

Trump’s 2016 rallies did include punching, but it was usually the sucker-punching of protesters that, indirectly, was encouraged by the bully-like Trump.

Common Patterns of these Horsemen of Rationalization

All four white evangelical leaders distinguish between the obligations of Christians to follow Jesus’ teachings and the political obligations of governments. As Falwell argued: “Jesus said love our neighbors as ourselves but never told Caesar how to run Rome — he never said Roman soldiers should turn the other cheek in battle or that Caesar should allow all the barbarians to be Roman citizens or that Caesar should tax the rich to help the poor. That’s our job.” Likewise, Jeffress insisted, in defense of Trump’s 2017 “refugee ban,” that “the Bible never calls on government to act as a Good Samaritan.”

Jesus was an eschatological Jewish prophet who proclaimed, in some sense, the restoration of Israel. As such, he is similar to the prophet Amos, a poor, marginalized outsider who calls for justice and righteousness and proclaims the judgment of God against an entire nation because of social injustice, judicial and economic corruption, and religious arrogance.

Jesus, an impoverished first-century artisan — not an adviser to the emperor — also spoke prophetic words of judgment against the oppressors of his people. Even his famous “Render unto Caesar what is Caesar’s” statement is a classic example of non-elite resistance against an extractive taxation system that transferred wealth from the majority of people in the Roman Empire to the ruling elites. Since the denarius coin that Jesus referenced would have been inscribed, “Tiberius Caesar, son of the divine Augustus,” Jesus is in fact suggesting, “Give that blasphemous coin back to that blasphemous emperor.”

Instead of speaking truth to power like the prophets Nathan, Amos and Jesus, today’s white evangelicals use their proximity to power to their advantage. They champion Trump because he champions their cause. As Perkins observes, “From a policy standpoint, [Trump] has delivered more than any other president in my lifetime,” a statement echoed by Falwell and many others.

That claim is correct. Other Republican presidents have largely given lip service to the issues most important to white evangelical leaders. Trump, from a policy perspective, has been the best friend they have ever had in the White House.

No Sense of Decency

These white evangelicals, by rendering to Caesar what is God’s, have not only lost their integrity; they have lost their credibility as religious leaders. Their hypocrisy, their worship of political power and money, damages the cause in which they claim to believe and betrays the teachings of the person they claim to worship. Whatever political advantages they gain will be short-lived. As Amanda Marcotte writes, “the Christian right may be winning elections in the short term, but it’s also driving people out of the pews, which is likely to lead to long-term defeat.”

What happens when you render unto Caesar that which is God’s? To paraphrase another saying of Jesus: You may gain the whole world, but you lose your soul.

The nation’s nightmare of McCarthyism lasted four years after Sen. Smith’s speech, and its demise is often credited, among other things, to Joseph Welch's famous rebuke to McCarthy: “Have you no sense of decency, sir, at long last? Have you left no sense of decency?”

The answer to that question about white evangelicals is that — in stark contrast to Margaret Chase Smith — they do not.