The EPA has long bent to the desires of industry, persecuted whistleblowers, and buried their own research 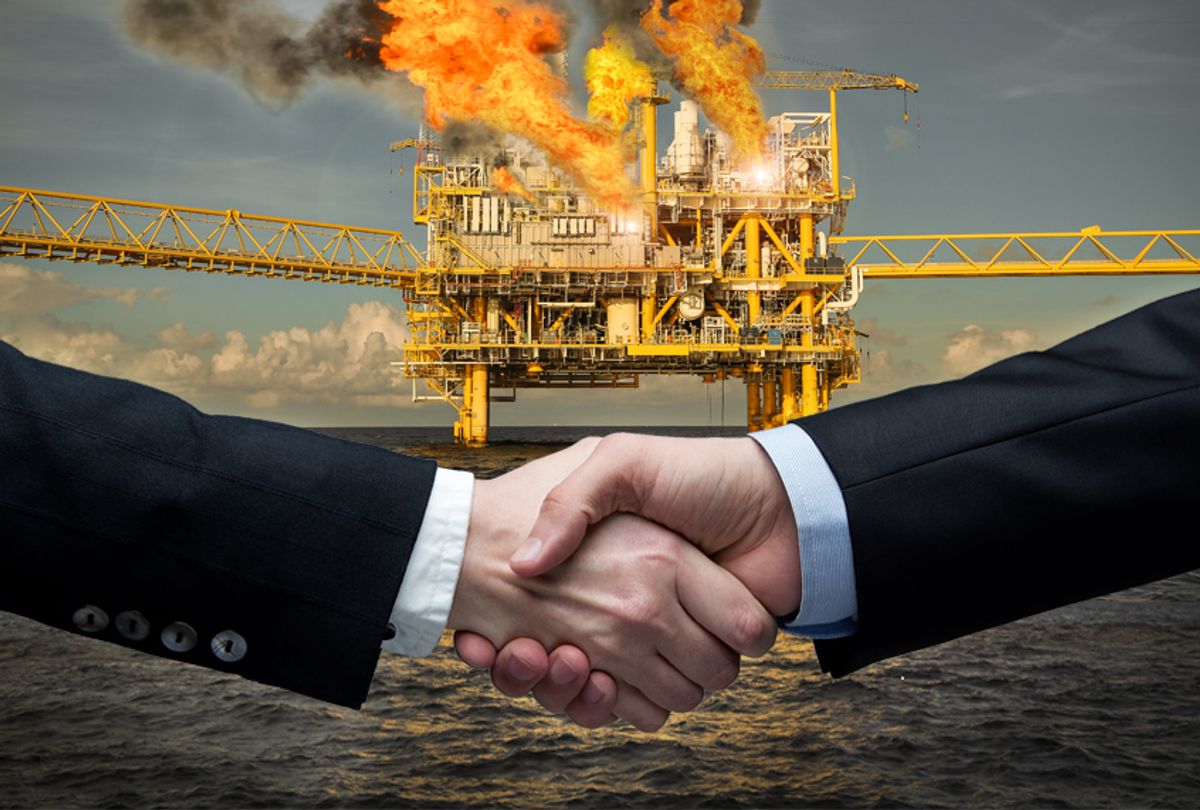 When Scott Pruitt took the helm of the Environmental Protection Agency in 2017, public health activists, environmentalists and ordinary citizens expressed outrage. How could a politician with close ties to the Koch-backed American Legislative Exchange Council (ALEC) be counted on to champion the Agency’s mandate? Why turn the EPA over to a lawyer who was involved in multiple lawsuits against it, and, who, as attorney general of Oklahoma, disbanded that state’s Environmental Protection Unit? Less than two years later, Pruitt's record as EPA head has only reinforced his detractors’ worst fears.

While Scott Pruitt’s tenure provokes almost daily controversy, what remains less known is that the EPA has long been a compromised institution. In fact, decades before Pruitt arrived with his transparently anti-legislation agenda, the EPA colluded with industry in ways that endangered public health and undermined its own mission.

I know this because in late 2017 my organization, the Bioscience Resource Project, collaborated with the Center for Media and Democracy to rescue and digitize the Poison Papers. These documents come mainly from the barn of longtime pesticide campaigner Carol Van Strum, whose homesteading family and their neighbors were repeatedly sprayed in the 1970s by what turned out to be Agent Orange.

Aimed at Oregon forest weeds, these aerial sprayings instead killed her animals and sickened her children. So, Van Strum and her husband embarked on a decades-long investigation to uncover who knew what about Agent Orange, and when they knew it. Their inquiry eventually broadened beyond Agent Orange and they ultimately amassed two and a half tons of eye-opening internal documents from the Agency and other sources. Collectively, the Poison Papers constitute an alarming portrait. Virtually from its inception in 1970, the EPA has proactively overridden scientific evidence and sacrificed public safety for the benefit of the chemical industry.

Permethrin: A case study in collusion

Permethrin, often marketed as Nix, is a staple among insecticides. Approved by the EPA in 1982, it is widely applied in agriculture and by homeowners. It is added to many consumer products, from carpets to clothing. Permethrin is also sold as an insect repellent for personal use. Given this ubiquity, no one would suspect that permethrin was approved for sale despite an internal EPA calculation that at legally allowable levels it would cause cancer in as much as 10 percent of the human population (p. 96 of the linked document).

In a memo (p. 45) from the Poison Papers dated May 7, 1982, one of the EPA’s most senior scientists, Adrian Gross, wrote bluntly to John Melone, acting director of EPA’s Hazards Evaluation Division, that: “the evidence is overwhelming that permethrin has a marked tumor-inducing or carcinogenic activity which is expressed in many different forms.”

Gross drew his conclusion from the seven long-term rat and mouse carcinogenicity studies on permethrin that were available to the EPA at the time. Five of the seven were audited by the Agency and all showed clear evidence of scientific misconduct that disguised evidence of harm:

These and other serious lapses in the studies — which included fraudulent reporting — prompted Gross to write (p. 37): “I cannot see how anyone in complete control of his senses could place any kind of reliability in any study conducted according to such practices" and later, (p. 45) "none of these seven studies can be regarded as having established that permethrin is ‘safe’ from a carcinogenic point of view.”

Just as disturbing, Gross showed EPA’s own evaluators systematically minimized or ignored evidence whenever studies showed that permethrin — despite the irregularities — elevated cancers and other health dangers.

In August of the following year, Gross followed up with the Director of EPA's Registration Division, Douglas Campt. It was in this memo that he made the ominous claim about permethrin’s cancer risk. Gross concluded that the proposed Acceptable Daily Intake (ADI) level of 0.05mg/Kg body weight per day of permethrin would result, depending on the extrapolation method, in an upper limit of cancer rates among the human population of between 1 and 10 percent from permethrin alone. "I should think that risks of cancer of this order… are unacceptable to any rational person," he wrote (p. 96).

Over Gross’s well-documented objections, EPA officials deemed permethrin safe. It was introduced to the market based on a final summary assessment written by Orville Paynter, the chief of EPA’s Toxicology Branch, and co-author Edwin Budd. This summary found no grounds for concern, concluding that “the risk of human oncogenic effects resulting from exposure to low levels of Permethrin is non existent or extremely low” (p. 120).

Gross, who died in 1992, was nothing if not dogged. In a separate memorandum to Jay Ellenberger of EPA’s Registration Division, dated June 18, 1981, concerning the pesticide oxamyl, Gross detailed the specifics of how the EPA’s internal review procedures contrived to systematically discard clear evidence pointing to toxicological hazards. Results damaging to a product were intensively and laboriously scrutinized by EPA reviewers until they were whittled down to findings more conducive to the chemical companies’ aims or disappeared altogether. This whittling took the form of successive rounds of internal evaluation, sometimes even necessitating special ad-hoc committees. In contrast, findings of lack of harm, even amid apparent testing fraud, received no such scrutiny (p. 73).

George Bernard Shaw once wrote, “What a man believes may be ascertained, not from his creed, but from the assumptions on which he habitually acts.” Accordingly, our months spent combing through the Poison Papers force the conclusion that many EPA officials — and not just those who dealt with permethrin and oxamyl — believe that all scientific evidence of harm is an aberration and that their job is to dispute or downplay it. Across much of the Agency this has led to actions that have been similarly antithetical to a protective mission.

While Scott Pruitt’s ties to industry and his personal anti-regulation fervor have us duly worried, the Poison Papers show that the dysfunction goes far deeper than any one individual. The EPA has operated largely, even entirely, in favor of the industry it is charged with regulating, yet it maintains the image of a public watchdog in the popular imagination. That is because the biases are subtle. Couched in the language of science and rationality, the bending to industry can look reasonable on the surface; and because separate instances of bias often occur in the EPA's distinct bureaucratic jurisdictions the full extent of the cooptation is largely unknown, even to those within the system.

If accurate diagnosis is the first step to a cure, then three solutions readily present themselves.

The first is to empower and reward whistleblowers. Whistleblowers are enormous potential assets to society. If they can prove to the satisfaction of outside judges that the performance of their colleagues is seriously deficient or corrupt, then whistleblowers should be formally and generously rewarded. Adrian Gross was sidelined and deprived of advancement, and others have had their careers and reputations jeopardized. In recent years, we’ve seen this with Cate Jenkins, an EPA chemist who resisted the Agency’s underestimation of the danger of dust at the 9/11 site.

The second solution originates with William Sanjour, another EPA whistleblower and former Branch Chief in its Hazardous Waste Division. While writing regulations Sanjour was specifically instructed to insert loopholes. The loophole instruction arose because the EPA has no separation of powers between its rulemaking (i.e., legislative) functions and its enforcement functions. This is a conflict of responsibilities that we rightly do not tolerate elsewhere in government. The simple solution is to divide the EPA into two agencies, with one half being responsible only for enforcement. This solution is practiced in the UK, where local municipalities enforce many food safety and other rules established nationally.

Thirdly, the leaders of each of these separate agencies should be responsible to Congress and not, as the EPA’s administrator now is, solely to the president. The reason is that presently the EPA can only enforce environmental laws if the president acquiesces. It can never be a better environmental and health advocate than the person in the White House. With Trump in charge, the danger of this should be immediately clear.

As Scott Pruitt’s conduct comes under scrutiny and if his position becomes increasingly tenuous, we may be lulled into a sense that the EPA’s integrity is soon to be restored and that the mechanisms of justice are working in the public’s favor. But rescuing the EPA and guaranteeing public safety is going to take more than firing one bad actor. It’s time to heed the lessons of the Poison Papers and make the EPA the servant of the public, not the friend of industry.

Jonathan R. Latham, Ph.D., is the co-founder and Executive Director of the Bioscience Resource Project and Editor of the Independent Science News website. Dr. Latham holds a Masters degree in Crop Genetics and a Ph.D. in Virology. He is currently at work on a book arguing that genetic determinism is the central myth of Western civilization.