In a profile published in the New York Times, Peterson reveals his sad agenda yet his defenders call it a "hit job" 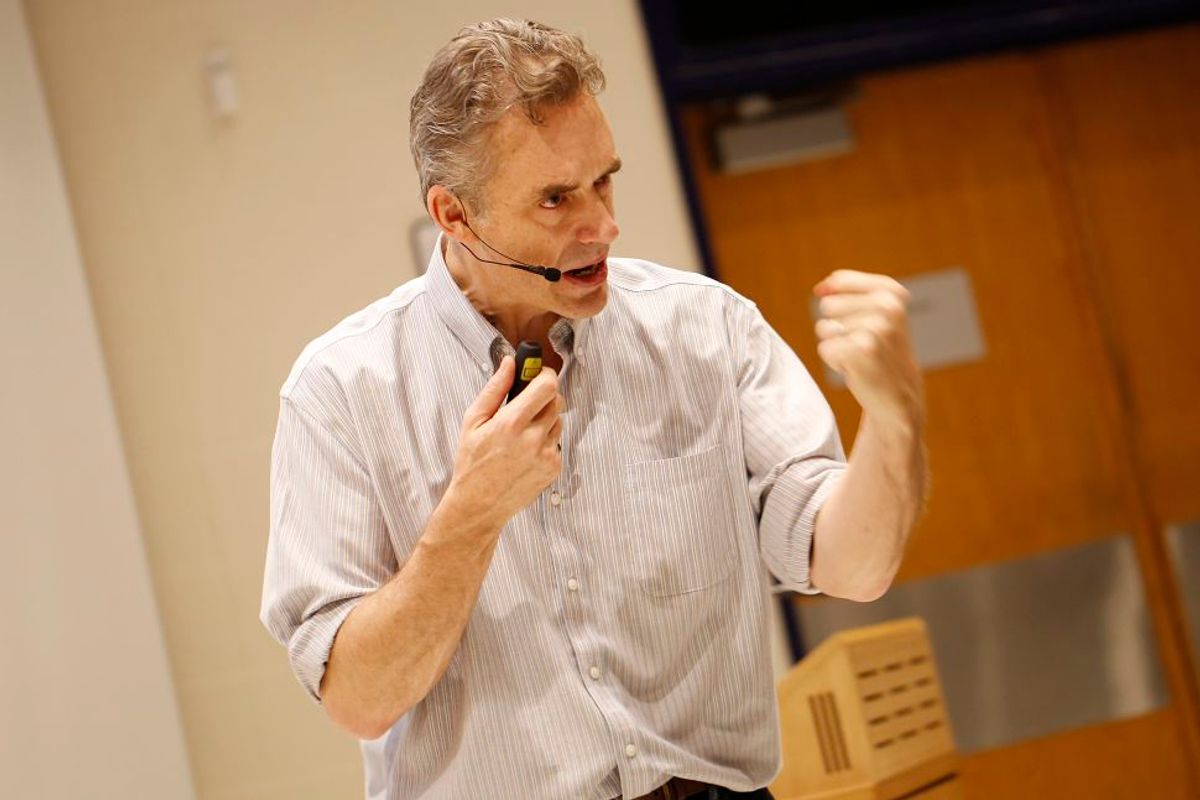 TORONTO, ON - January 10, 2017. Jordan Peterson during his lecture at UofT. Peterson is the professor at the centre of a media storm because of his public declaration that he will not use pronouns, such as "they," to recognize non-binary genders . This lecture had no reference to the hot topic. (Rene Johnston/Toronto Star via Getty Images) (Toronto Star Via Getty Images)
--

Jordan Peterson, the clinical psychologist and University of Toronto professor who was recently canonized as a member of the Intellectual Dark Web, is a serious person. Peterson said as much in a lengthy New York Times profile dubbing him "Custodian of the Patriarchy." Times reporter Nellie Bowles penned the piece, which has since been labeled a "hit job" and an "assassination attempt" on Peterson's character.

The article was a followup of sorts to Times opinion editor Bari Weiss' story on the Intellectual Dark Web, an informal collective of anti-left lecturers and podcasters who have gained notoriety for amassing a significant following on YouTube and Reddit. Peterson, like many of his IDW cohorts, is of the opinion that the progressive liberal agenda of equal opportunity and tolerance contradicts human nature and the Western ideal of individual responsibility. It comes to no surprise that most of Peterson's audience is made up of young, white males who feel subjugated in a society that is trying to prop up women and racial minorities.

A self-help guru, Peterson has spent a lot of time pondering the source of youthful-male rage, which manifested last month in a terrorist attack in Toronto perpetuated by a man who described himself as an incel--short for involuntary celibacy--a term representing a group of men and an online culture that blames women for their poor sex life.

Over the course of Peterson's two-day-long interview with the Times, the academic offered his insights on the relationship between man and woman and how feminism has polluted the natural order.

“The masculine spirit is under assault,” Peterson told the Times. “It’s obvious.”

One of Peterson's most controversial opinions in the profile is his recommended remedy for the virus plaguing the masculine spirit.

“The cure for that is enforced monogamy," Peterson said.

It was the type of assertion that usually precedes a laugh and a clarification that it was a joke. But Peterson did not say this in jest.

"Mr. Peterson does not pause when he says this," Bowles wrote of this specific interaction. "Enforced monogamy is, to him, simply a rational solution. Otherwise women will all only go for the most high-status men, he explains, and that couldn’t make either gender happy in the end."

For readers of the Times, it was the second time in as many weeks that a social conservative had suggested a model for the redistribution of sex. Op-ed columnist Ross Douthat wrote earlier in May that American society may soon consider sex as an inalienable right for all, that a right to sex exists, "and that it makes sense to look to some combination of changed laws, new technologies and evolved mores to fulfill it."

The idea of enforced monogamy caused quite a bit of debate on Twitter. Right-wing provocateur Ben Shapiro, also a member of the IDW, defended his colleague in a scathing article denouncing Bowles profile on Peterson.

According to Shapiro, Bowles couldn't "hold back her obvious antipathy for her subject; instead, she lets her sneering condescension drop from every comma. She never lets Peterson spell out an argument; she satisfies her id with every snide aside. It’s an extraordinary performance by a person deliberately attempting to misunderstand her subject."

It's a distinction without a difference. Peterson may not be clamoring for immediate state intervention on the issue of the redistribution of sex, but he does advocate for, and what would undoubtedly be, a non-consensual reshaping of American society.

(To be fair to Shapiro, Ben does write that "while society would benefit from promotion of monogamy, the solution for incels is to become better potential partners, not to whine about breakdown in the monogamous standard (few incels are complaining that they can’t find women to marry; they’re mostly claiming they can’t find women to have sex with)."

Regardless, even if one were to give a charitable reading to Peterson's enforced monogamy concept, the academic failed, overall, to prove to his doubters that he was indeed a serious thinker. The Times profile quoted many of Peterson's inane ramblings, thoughts that were more appropriate of an acid tripper than a celebrated lecturer. Suffice it to say, critics of Peterson did not come away impressed.

Many readers of the profile took to Twitter to mock Peterson's absurd worldview.

I reject the claim that Jordan Peterson is just fulfilling a need for poor, lost men searching for meaning, and that he just hit at the right time.

I think, instead, he is stimulating their rage and longing first and THEN fulfilling the need he has created or exacerbated.

in that jordan peterson profile he says he’s ‘a very serious person’ and also witches are real and exist — raandy (@randygdub) May 19, 2018

Jordan Peterson thinks that the feminine = chaos, and the masculine = order, even as he reminds us that men are crazed baboons who can only be stopped from violent rampages if they get to own women ‍♀️ pic.twitter.com/Rpao8zIFiB — Natalia Antonova (@NataliaAntonova) May 19, 2018

My mom: Clean your room

Me, a 22-year-old: Shut UP you just don't UNDERSTAND ME JESUS CHRIST I don't have TIME for your BULLSHIT

Jordan Petersen: Your mom, a woman, is crazy. But totally separately, it is probably true you should clean your room

i am a jordan peterson fan & i demand journalists translate the ridiculous things he says into things that make sense & sound smart, like i do — Shaun (@shaun_jen) May 19, 2018

The consensus on Twitter would appear to be a crippling indictment on Peterson's status as a serious thought leader. But that's the thing with cult followings, fans remain devout despite more sensible alternatives.