Trump's cellphone practices raise questions about the espionage risk posed to the US — but her emails, right? 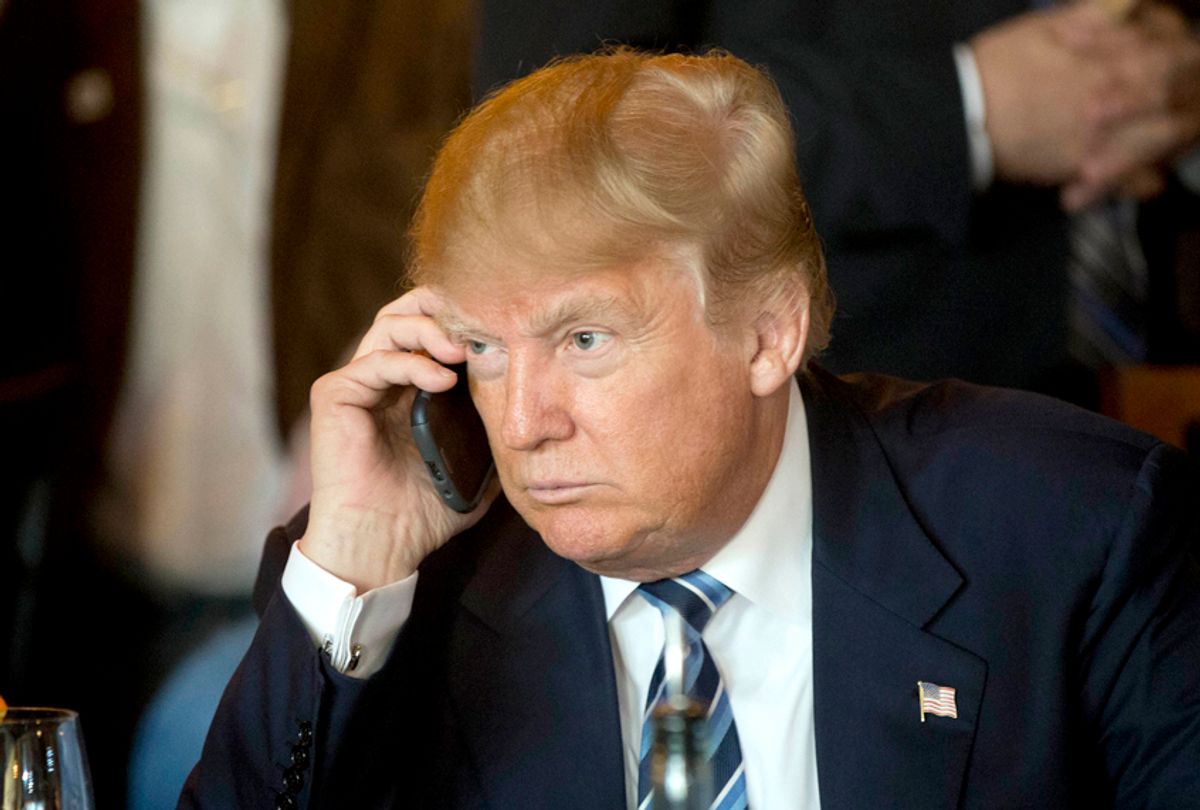 President Donald Trump uses a cellphone not stocked with sophisticated security features and has ignored repeated attempts by his staff to strengthen his devices against hackers, Politico has reported.

Trump regularly uses at least two government-issued iPhones — one "burner" device capable only of making calls and another that's equipped only with a Twitter app and "a handful of news sites," according to Politico, which said former national security advisers criticized the president's phone practices.

The president's call-only phone has a camera and microphone — features that make him vulnerable to hacking or surveillance, Politico said, citing two senior administration officials as sources. White House staff have advised the president to swap the phone he uses for Twitter on a monthly basis, but Trump has allegedly dismissed their suggestions, telling aides it would be "too inconvenient."

Trump's disregard of his own communications security is especially peculiar given that aggressive attacks against Hillary Clinton's use of a private email server as secretary of state -- a system that supposedly made her a potential target of espionage and blackmail -- was an integral part of his 2016 presidential campaign.

"Her server was easily hacked by foreign governments, perhaps even by her financial backers in communist China — sure they have it — putting all of America and our citizens in danger, great danger," Trump said in a June 2016 speech on the campaign trail, in which he called Clinton "the most corrupt person ever to run for president." He repeatedly denounced Clinton's use of a private email server on the campaign trail, famously inciting his fans to chant, "Lock her up."

Politico said that Trump's Twitter phone has gone as long as five months without getting checked by security experts. The GPS location trackers on the president’s devices have reportedly been disabled.

The White House declined to comment for the Politico story, but a senior West Wing official told the outlet that Trump's call-only phones "are seamlessly swapped out on a regular basis through routine support operations. Because of the security controls of the Twitter phone and the Twitter account, it does not necessitate regular change-out."

Politico's Monday report is the second in several weeks to raise questions about the espionage risk posed by Trump's cellphone use.

CNN reported in April that Trump is increasingly relying on his personal cellphone to make calls, citing multiple sources inside and outside the White House.

"Use of personal smartphones, which may not have all of the security features of government-issued smartphones or be regularly updated to address newly discovered vulnerabilities, present an obvious potential security risk," Mary McCord, a former head of the Justice Department’s national security division, told CNN.

McCord's concerns were echoed this week.

"Foreign adversaries seeking intelligence about the U.S. are relentless in their pursuit of vulnerabilities in our government’s communications networks, and there is no more sought-after intelligence target than the president of the United States," Nate Jones, a former director of counterterrorism on the National Security Council during the Obama era, told Politico. "Doing so could pose significant risks to the country."

The White House announced in January that staff and guests would no longer be able to use their personal cellphones in the West Wing for security reasons. White House press secretary Sarah Huckabee Sanders said at the time, "The security and integrity of the technology systems at the White House is a top priority for the Trump administration," but declined to answer whether the cellphone ban would apply to Trump's personal devices, according to NBC News.

Users on social media expressed concern at the reported security vulnerabilities posed by the president's cellphone practices. Some were quick to point out the parallels between Trump's tirades of Clinton's use of a private email server and his own communications shortcomings.

"Will [Trump's] supporters cheer 'lock him up'? Or does that only apply to emails?” wrote former federal prosecutor Renato Mariotti on Twitter.

"Am I wrong that there’s, like, a 100% chance the phone has been hacked?" asked MSNBC host Chris Hayes.

"Gonna be wild when the WH cancels the North Korea summit and NK responds by uploading sound files of every conversation Trump has had over the last year and a half," Hayes said in another tweet.