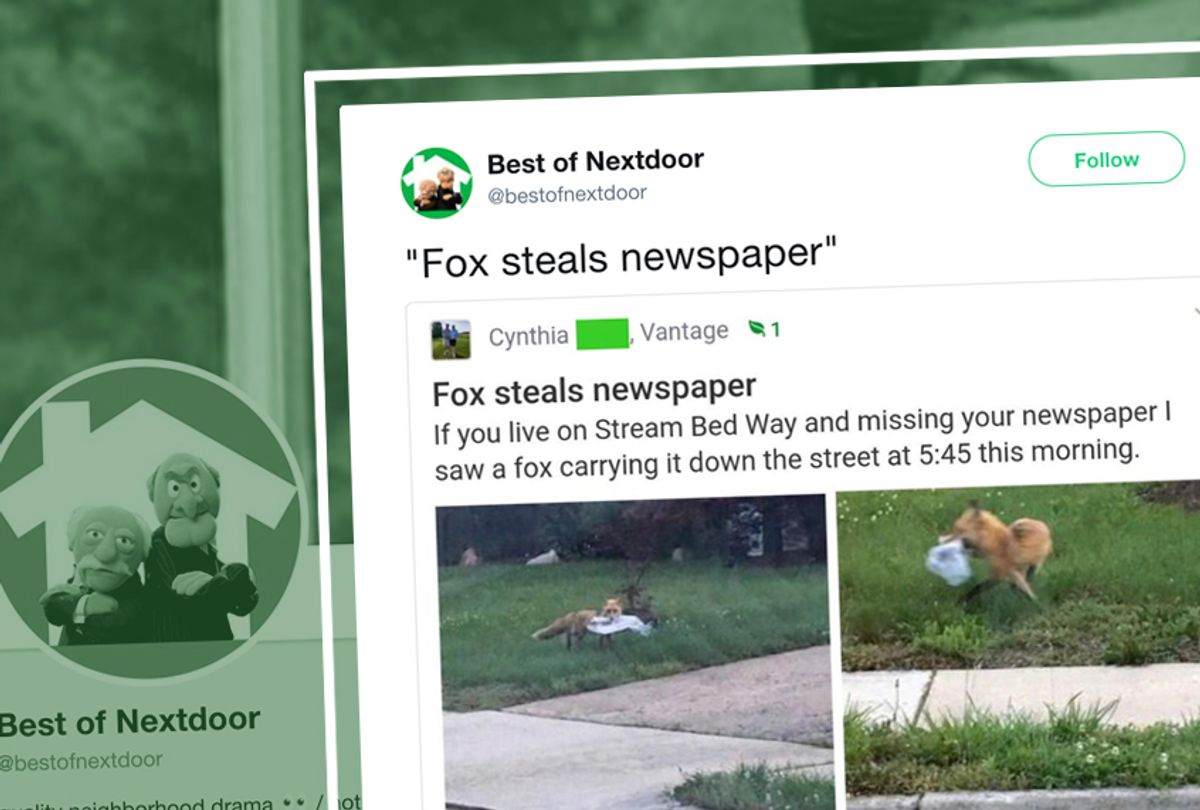 Back in the '90s, before the internet ruled every facet of social life, Americans possessed a ready-made stereotype of what a "neighbor" archetype might look like: nosy, yet endearing; occasionally nettlesome, yet happy to loan a cup of sugar. Fictional neighbors like Ned Flanders on "The Simpsons" or Wilson on "Home Improvement" embodied the stereotype, often doling out unsolicited advice to those series' protagonists.

Yet unlike these TV neighbors of yore, kept at a safe distance by a physical fence, social media has shifted the neighborhood dynamic. Enter Nextdoor, a Silicon Valley-based social network for neighborhoods that beams your neighbors' worries directly to your eyeballs. It's a place where neighbors can swap goods, issue “urgent alerts” about neighborhood security, and, well, complain about each other. Users join communities based on their neighborhood, while the data-hungry company solicits existing users to reveal their neighbors' identities and addresses so it can mail them invitation postcards. 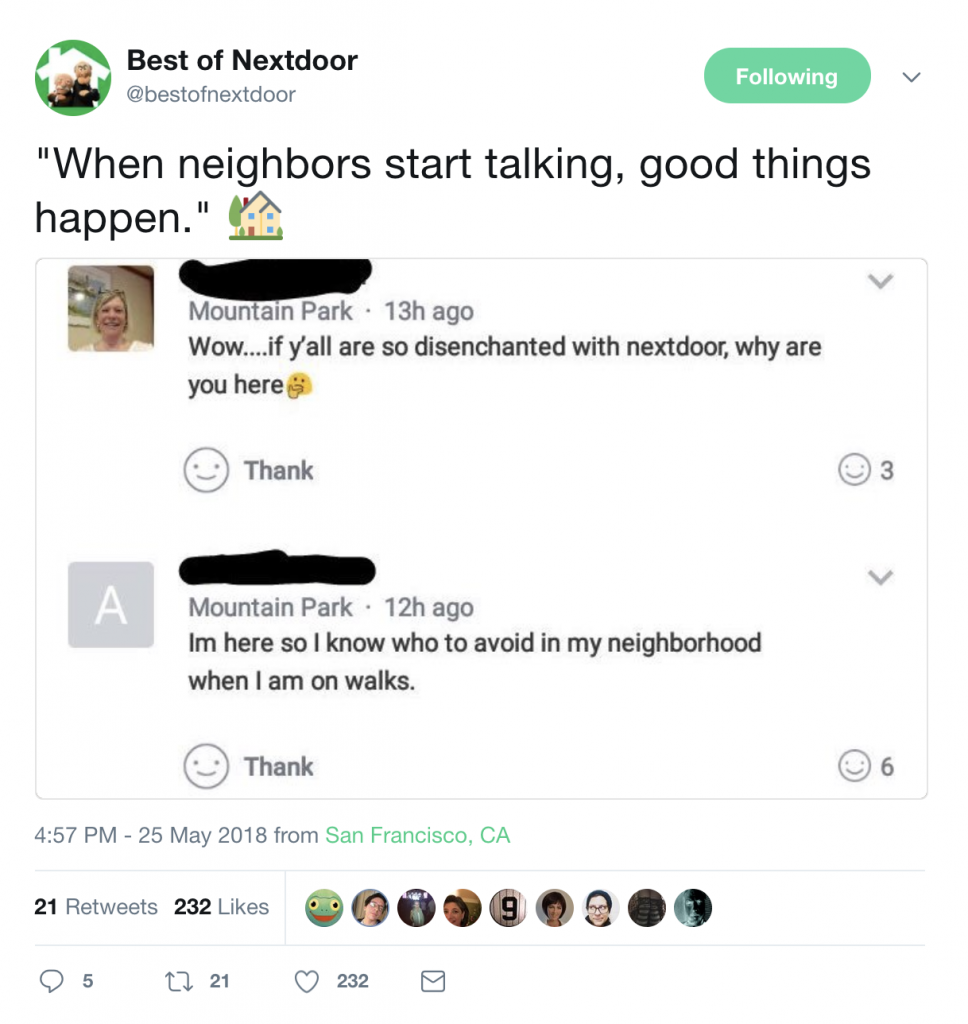 Nextdoor had ambitions of being a sort of digital community center. But pretty quickly, it devolved into a breeding ground for petty grievances: complaints about pets, reports of wild animals stealing newspapers, and bizarre queries over how to "unvaccinate" children, to name a few. Nextdoor's reputation for cranks and fringe characters provided the inspiration for a hilarious parody Twitter account, called "Best of Nextdoor," that documents the best of the worst of the "local" community platform. Nextdoor's reputation, evidently, precedes itself: The Best of Nextdoor Twitter account has far more followers than the company's official Twitter account — 76,000 to 28,600, as of this writing.

Best of Nextdoor’s creator, Jenn Takahashi, was living in the Glen Park neighborhood in San Francisco when she discovered that Nextdoor was a reliable source of humor (and schadenfreude).

“It would make my day, refreshing the app,” Takahashi told Salon. Takahashi recalled the saga of a neighbor who would take to Nextdoor to grumble about people touching her lawn ornaments: “She would freak out if you touched one of her lawn gnomes, and since she named the individual lawn gnomes, she would also explain who in the lawn gnome family was offended.”

When Takahashi moved away from the lawn gnome family's neighborhood, she felt there was a void that needed to be filled. In her new environs, San Francisco’s South of Market District (SoMa), the conversation on Nextdoor had a more serious tone, reflecting the spirit of the more crime-heavy neighborhood.

“I missed being able to get an escape and laugh at the trivial things; I would always find them so fascinating, “ she said. “I decided to create the account because my mom would send me submissions, and my friends, to fill that void after leaving Glen Park, and so I just started tweeting them not expecting it to blow up.”

Eventually users and lurkers around the country started sending Takahashi their submissions. Then, in April 2018, the Best of Nextdoor account reached full-fledged internet fame thanks to an absurd, Nextdoor-inspired brawl in a Seattle neighborhood. The parody account's followers dubbed the now-infamous incident "The Seahawks Cannon."

“There was a neighbor who would fire a cannon every time the [Seattle] Seahawks scored a touchdown,” Takahashi explained. “Someone posted a photo in Nextdoor of their dog, scared, in a bathtub, asking to please stop [firing the cannon] because he gets upset.”

This thread became a focal point of discussion on Nextdoor Seattle. As neighbors chimed in, it accumulated 283 comments, and things started getting ugly. According to reports, a user named Dan got banned from the conversation for using the term "Washingtardians."

One well-meaning neighbor suggested sorting out the lively digital debate in person at the local library. That ended in a violent altercation in which the police were called. Takahashi provided updates to her followers throughout the day, and the Seattle Post-Intelligencer wrote about it. (Salon reached out to Nextdoor for comment, though they did not respond.)

While it was humorous to those observing from afar, for those involved it was disheartening.

"Very sad that this situation devolved to this ugly altercation,” one user said. “We are lucky no one pulled out a weapon last night."

It is baffling to think this all started on a digital platform. While this incident is not your average day on Nextdoor, it is worth wondering if the internet enabled its outcome. Nextdoor was supposed to provide users a sense of community, but under the anomic influence of online communication (a condition known academically as the online disinhibition effect), Nextdoor sometimes more resembles 4chan.

Perhaps that explains the appeal of Best of Nextdoor: It shows the levity of the oft-charged online world. Some of the finest Best of Nextdoor posts consist of non-urgent "urgent alerts" that users receive on their phones, including a recent "urgent alert" from a worried mom asking if the neighborhood should be concerned about the song “Gucci Gang” by Lil Pump.

Vaping has also been a hot topic; a concerned mother recently posted a list of "signs to look out for” that might hint that a middle schooler was vaping. 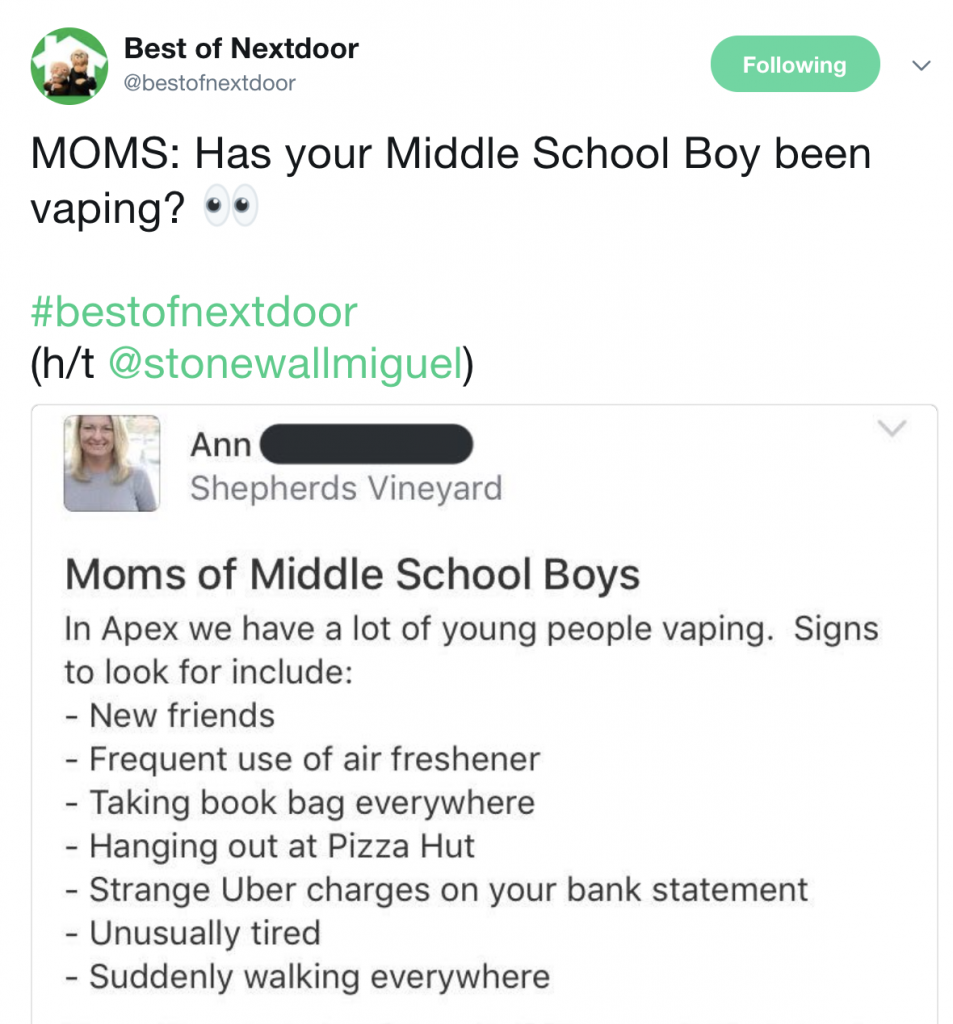 These trivial anxieties have made Best of Nextdoor more popular than the original.

“Every neighborhood has its quirks ... no matter where you live there is some kind of unity [in] that we all have crazy neighbors,” Takahashi said. “It is interesting how these trivial petty complaints are universal.”

If you are wondering, yes, Nextdoor has reached out to Takahashi.

"They actually congratulated me when I surpassed them in Twitter followers, but then they said they received a couple complaints and asked if I would start censoring [names],” she said.