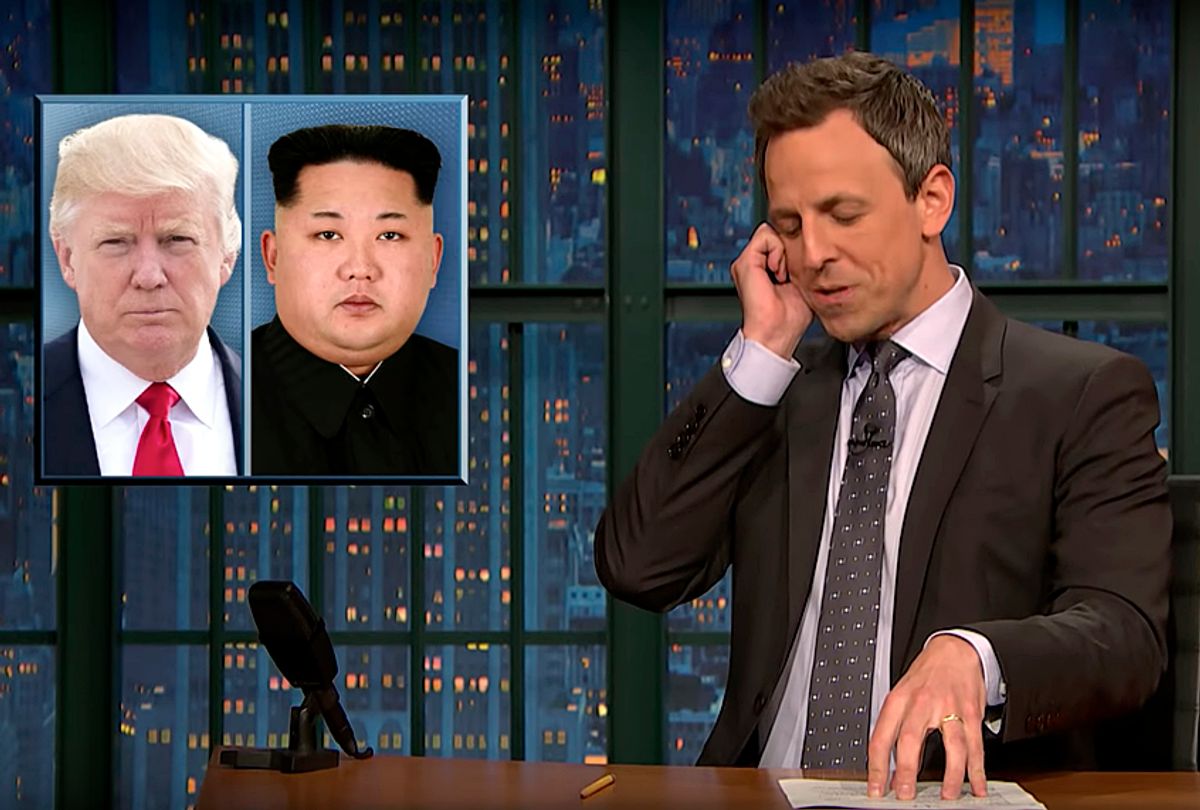 Late-night hosts have been discussing the planned meeting between President Donald Trump and North Korea's leader Kim Jong Un closely over the last few weeks, so it came as no surprise that they were ready to comment when news broke that the much-anticipated encounter fell through on Thursday.

"Dammit!" Seth Meyers said, lamenting the breakdown in talks. The NBC host then explained he had purchased one of the commemorative coins that the Trump administration had created of the two leaders facing off. "Although, it's my fault. I should have learned my lesson after I bought commemorative coins for the border wall, biggest inauguration ever, Anthony Scaramucci's first 100 days on the job, 'cleared of all charges' and People's Sexiest Man Alive."

Trump had been scheduled to meet with the North Korean leader in Singapore on June 12. But following several messages from North Korea threatening an end to the talks, and a message from a North Korean official who described Vice President Mike Pence as "ignorant and stupid," Trump, in a letter to Kim dated May 24, 2018, abruptly announced that he would not attend the summit, citing "tremendous anger and open hostility displayed in your most recent statement."

On TBS, "Conan" host Conan O'Brien joked about the canceled talks in his opening monologue.

"This morning, President Trump canceled his summit with Kim Jong-un, saying it's because of Kim's 'open hostility,' Trump said, 'I will not tolerate hostility from a 'fat faced little Rocket Man,'" the host said.

He continued, "President Trump — did you know this? — informed Kim Jong-un that he was canceling their summit by sending Kim a personal letter. The disturbing part is Trump signed the letter, 'Yours in Crazy.'"

And on the "Late Show," Stephen Colbert detailed the steps that led to the collapse of the discussions.

"Did the president of the United States really just say 'Some day a date will happen?'" Colbert asked. "I would call to complain if that was written inside a fortune cookie."

Still, Trump and Kim have no choice but to repurpose the summit, Colbert said.

"They've already made the commemorative coin marking the occasion of the summit." And since the minted metal was met with such praise, he added, "here at 'The Late Show' we have received an exclusive first peek of the new coin celebrating Mideast peace. It's just a carton of eggs labeled 'Chickens!'"

Over on ABC, Jimmy Kimmel kicked off his "Live!" show by mentioning Trump's pardon of late heavyweight boxing champion Jack Johnson on Thursday following the advice of actor Sylvester Stallone. "Only Donald Trump could cancel a summit with Kim Jong-un in the morning and then have a meeting with Sylvester Stallone later in the day," Kimmel said.

Of the line, "if you change your mind having to do with this most important summit please do not hesitate to call me or write," the host joked, "Feels kinda like we're at the part of the movie where the couple breaks up but then after about a month they realize they can't live without each other and one of them has to run through airport to stop the other one from getting on a flight."

James Corden on CBS opened his "Late Late Show"' with a similar romantic analogy. "Now this has been going on for some time. First, the meeting was on, then it was off, then it was back on, and I can't handle the tension. King Jong-un and Trump, they are the new Ross and Rachel," he said.