Every Trump counterattack against Mueller he learned from Roy Cohn, aide to the great witch hunter of the 1950s 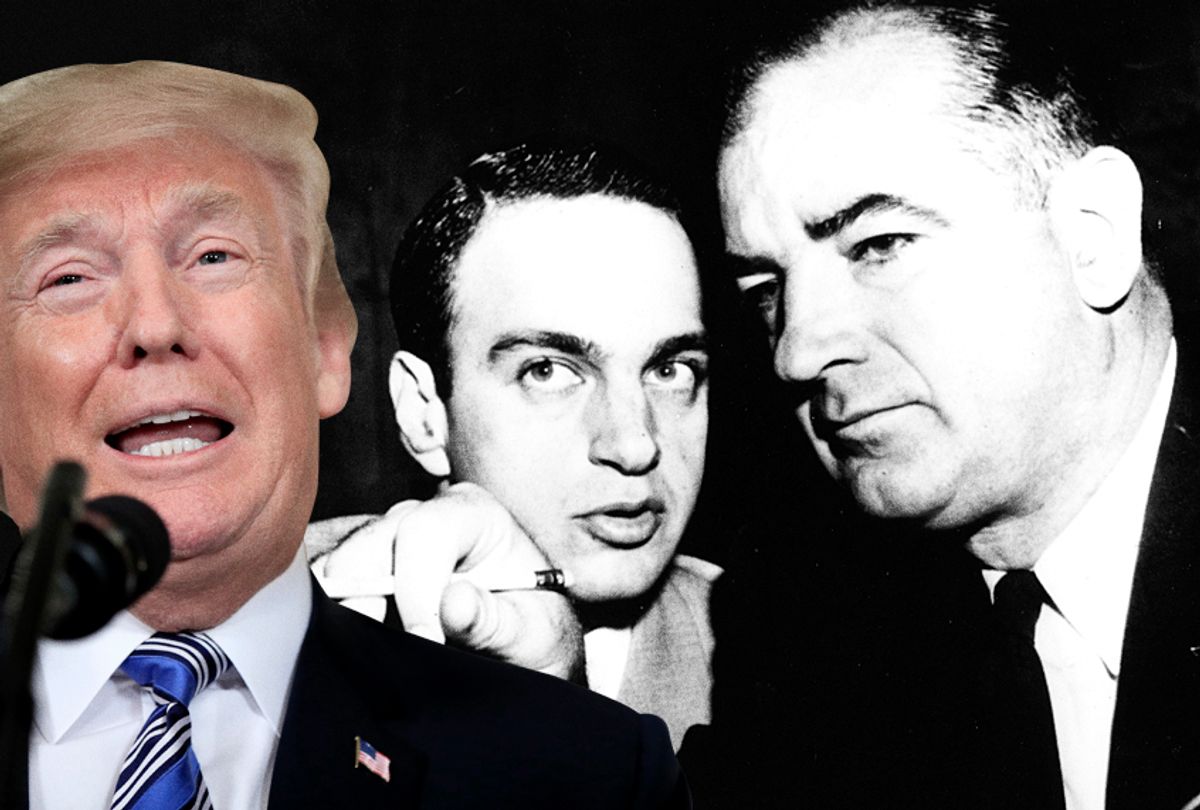 When Robert Mueller began his investigation into Russian interference in the 2016 election campaign, Donald Trump proclaimed on Twitter, "This is the single greatest witch hunt of a politician in American history!" That phrase -- "Witch Hunt!" -- has been his go-to war cry ever since, bolstered only by his near-meaningless "No collusion!"  claim, even as Mueller has racked up indictments, guilty pleas and cooperating witnesses.

Trump's defense is working, to some extent, given that a recent poll found that 59 percent of respondents didn't believe Mueller has uncovered any crimes so far, notwithstanding all those guilty pleas. Such is the power of a relentlessly repeated narrative over mere facts.

Now we're about to see what a real witch hunt looks like, as Trump tries to force the Department of Justice to investigate the investigators, looking for imaginary wrongdoing or "infiltration" in what was an entirely normal, non-intrusive FBI method of information-gathering.

This is a classic example of Trump gaslighting, à la "Hillary Clinton started birtherism and I ended it," trying to convince us that up is down and we're crazy for thinking otherwise. Only now it's not just Trump. Increasingly, it's more and more of the Republican leadership.

It’s not the first such effort, by a long shot, as David Corn recently tweeted:

With the midterms fast approaching, congressional Republicans seriously falling in line, and the DOJ starting to buckle under pressure, this effort looks much more serious.

It's fitting that Trump should choose this path, since his mentor, the infamous Roy Cohn, was Sen. Joseph McCarthy's lead investigator during his witch hunts, which also began based on absolutely nothing — a supposed “list” of 57 “communists” that McCarthy waved in the air, but that actually didn’t exist, as explained by University of Washington professor Joe Janes in an episode of his “Documents that Changed the World” podcast series:

It was on Feb. 9, 1950, that McCarthy — who had dubbed himself “Tailgunner Joe” for acts of World War II bravery he did not in fact commit — told a crowd of 275 at the Ohio County Republican Women’s Club that the U.S. State Department was “thoroughly infested with communists” and brandished papers he claimed were a list of 57 such subversives.

“My primary interest here was as an example of a document that didn’t actually exist, and which still had great impact,” Janes said when discussing the podcast. “So far as we can tell, for all McCarthy’s bluster, his ‘list(s)’ were mainly numbers either taken from other sources or misremembered or just made up. Yet people believed them, and acted as a result of what he said he had."

McCarthy was a fake war hero, and Donald Trump may well be a fake billionaire (and is definitely a fake business genius). Both presented themselves as persecuted by vast conspiracies, and both excel at smelling blood, and getting others to follow. McCarthy didn’t start the post-World War II red scare that made him famous, he just dialed up the paranoia to 11, much as Trump did with birth-certificate mania during Barack Obama’s first term.

Even though there was no there there, most of the Republican Party went along with McCarthy's massive commie-hunt. A handful of internal dissenters quickly melted away. So it's hardly surprising that it's happening again. Four months after McCarthy’s speech, on June 1, 1950, Sen. Margaret Chase Smith, R-Maine, gave the most memorable speech of her career, denouncing McCarthy’s tactics — but not naming him — and introducing a "Declaration of Conscience," signed by herself and six other GOP senators.

But when the Korean War broke out later that same month, any chance of them prevailing over McCarthy vanished. Only one — Sen. Wayne Morse of Oregon —remained thoroughly outraged, eventually leaving the Republican Party to become an independent in 1952, and then a Democrat in 1955. Later, Morse would cast one of only two votes against the Gulf of Tonkin Resolution in 1964, which greatly expanded the U.S. military role in Vietnam. There were no one else like him at the time -- and there certainly isn't now.

For the rest of the Republican Party, supporting McCarthy made sense in the short run: The GOP gained a Senate majority in the 1952 election for the first time in 20 years, though it was a short-lived and unstable triumph. Democrats regained their majority two years later — the year McCarthy was finally censured — and won 12 Republican-held seats in the wave election of 1958, beginning another two decades of legislative hegemony. Today's Republicans are clearly taking a similar political risk by going all-in on Donald Trump. But will they take the whole country down with them?

Connecting Trump to McCarthy is the figure of Roy Cohn. As summarized by Politico last year, their connection was forged  in 1973, when Cohn defended the 27-year-old Donald Trump and his father against a federal racial discrimination lawsuit: “Cohn filed a $100-million countersuit against the federal government, deriding the charges as ‘irresponsible’ and ‘baseless.’” In later filings, “Cohn accused the DOJ and the assisting FBI of ‘Gestapo-like tactics.’ He labeled their investigators ‘undercover agents’ and ‘storm troopers.’” Does any of this sound familiar?

There’s more. At one point Cohn reportedly called a senior figure at the DOJ in Washington “and attempted to get him to censure one of the lead staffers” on the Trump investigation. It's almost uncanny: There’s virtually no move Trump has tried against Robert Mueller that wasn’t prefigured in Cohn’s first outing defending Trump. And Trump got some pretty good licks in himself.

Of course the Trumps finally settled that lawsuit — just as the Justice Department had originally offered. But the younger Trump bristled at any admission of guilt, and was bitter about the advertisements he was forced to place, “including those targeted specifically to minority communities — saying they were an ‘equal housing opportunity’ company.” Then, foreshadowing Trump's future campaign pledges that “Mexico will pay for the wall,” came this petulant tidbit:

At one point, flouting the formality of the court, Trump addressed one of the opposing attorneys by her first name: “Will you pay for the expense, Donna?”

Not much has changed in more than 40 years. But what about the term “witch hunt,” itself? Last year, the New York Times sketched out a history of its recent usage, noting: “The central paradox of modern witch hunts is that those who claim to be the victims, like Nixon, are often the ones most enthusiastic about carrying them out.”

That’s not actually a paradox at all. It’s a natural consequence of choosing to fight dark feelings—projecting them onto others—rather than facing hard facts. As this overview of the Salem Witch Trials of the 1690s reveals, there were a multitude of complex social and political threats facing the Massachusetts colonists. Salem’s residents were overwhelmed by their situation — against which they were ultimately powerless, since the English crown was ultimately pulling the strings. But they were also overwhelmed by their feelings, and those they could do something about: They could hunt witches, and pour all their fears and frustrations onto the most vulnerable members of their small and isolated society.

Modern America is not like Salem. We may be overwhelmed by both circumstances and feelings, but we are not powerless at all. The choice is ours: We can confront difficult facts and deal with them, or we can retreat into dark emotions, projecting them outwards onto others and tweeting “Witch Hunt!” to the world.

How trolls conquered the Republican Party

Salon political reporter Amanda Marcotte on the decline of conservatism and the rise of "Troll Nation."