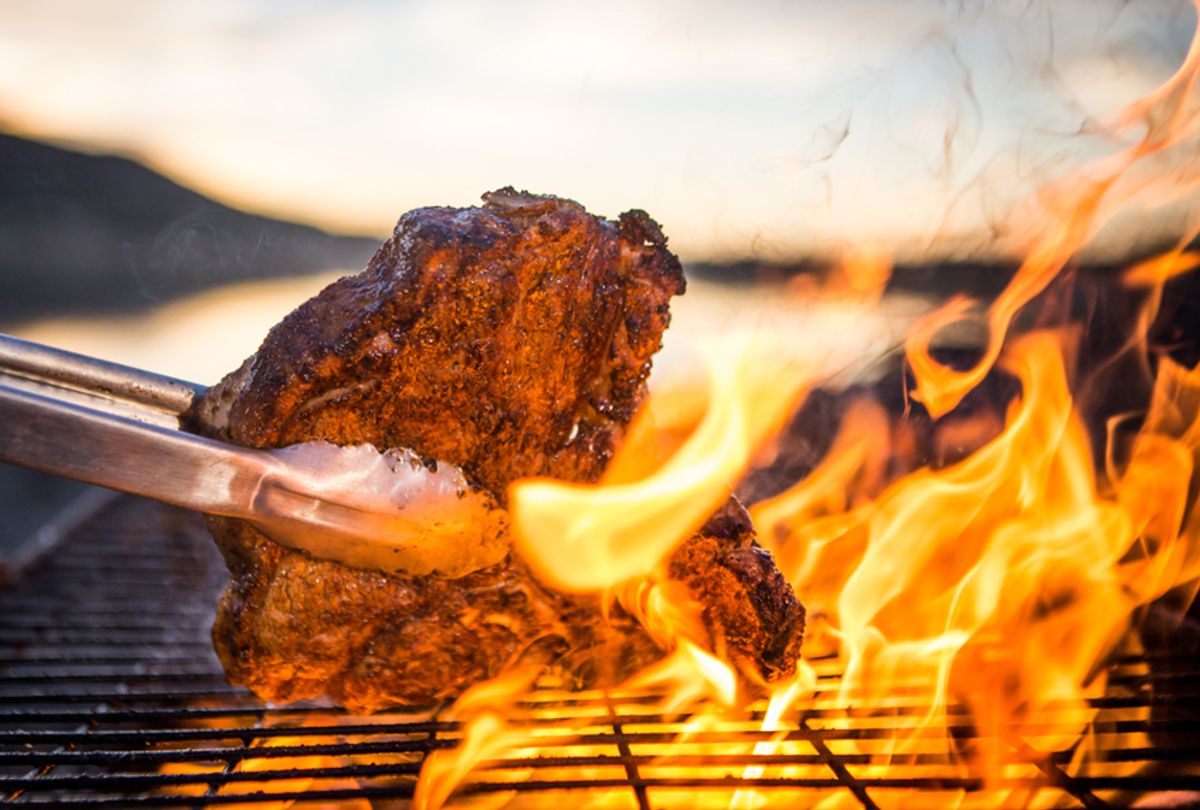 There’s a picture of my Grandma Bev, her sister Julie, and their sister-in-law Vicki perched in lawn chairs at the annual family Memorial Day barbecue in North Wales, Pennsylvania. Their eyes crinkle in the sunshine. The suburbs unfurls vast green grass behind them. They look happy.

As Bev got older, her makeup got more and more orange, as if she had given up on the attempt to match the color to her face. In the photo, her foundation looks as if it has begun to melt in the beginning-of-summer heat. There’s a plastic fork in her hand and a plate of something in her lap. Potato salad?

It’s been several years (three? four?) since I’ve been to the family barbecue. Last week, my cousin Dan texted me: Your parents always come, why don’t you join them? And I texted back, suddenly inspired to remedy my absence: See you there!

Dan is my second cousin—Julie’s grandson. His mom hosts the event in her backyard, and has every year since before I can remember. When I was a kid, Dan and his two brothers played all sorts of games that I found exotic and thrilling. Like capture the flag, which I thought was only for gym class when the teacher didn’t know what to do with us, but took on a whole new allure with an eager gang of neighborhood kids and a gigantic red t-shirt as the designated flag. They let me join and didn’t even seem to mind that I needed a refresher on the rules.

Games with throngs of kids in big yards felt mystical, from another universe. Besides that day each year, they were not a part of my childhood. I grew up in a Baltimore rowhouse, an only child. Sometimes I drew with chalk on the sidewalk and practiced handclaps with my neighbor, but only if my mom was watching from the front porch. When she let me walk to the corner store across the street alone to buy a popsicle one sweltering summer afternoon, I felt like I had arrived in the world. Sure, I played soccer at Wyman Park on Saturday mornings and my dad coached a neighborhood girl’s basketball team where I was a clumsy but enthusiastic center. But I had never run through suburban streets unencumbered, one family’s backyard turning into another’s, sprinklers spraying at our shins. We ran and ran. The kids laughed and shrieked and raced; I was swept up in the buoyant energy of the group. I wondered if this was what it would be like to have brothers or a big family that I saw more than once a year. The day smelled of just cut grass and sweat and smoke rising from the grill.

Dan’s dad used to cook clams on the grill, dousing them with butter when their shells popped open. They were briny and wonderful. When I was a teenager, Dan’s parents split up and the clams became a thing of the past. But the rest of the menu remained unchanged: hot dogs, hamburgers, and grilled chicken. Fat slices of watermelon for dessert that dripped their sticky juice down my forearms. Classic, all-American, and perfect

My mom would worry about what to bring and ultimately decide on potato salad—one made with vinaigrette instead of mayonnaise so it wouldn’t get nasty sitting outside in the heat all afternoon, next to the bowls and Tupperware of sides the other family and neighbors brought all lined up on a checkered tablecloth. Our game of capture the flag would devolve into chaos and we’d get hungry for potato salad and hot dogs, grilled until the skin began to char and snap. There is nothing better.

This year will be the first time I bring my fiancé Anthony to the barbecue. What have we been doing with the three Memorial Days since we’ve been living together? I asked him in bed last night, trying to remember. I couldn’t sleep. Last year we rode Citi bikes to Brooklyn Crab with a bunch of Anthony’s British friends—Anthony is from England. We mangled snow crabs with our mallets, drank beer, and played cornhole, which I lost epically. The year before that? We both came up blank.

I’m excited to bring Anthony to the family festivities. He’s met some of the cousins, but not Dan. Dan has a girlfriend who I haven’t met yet. So does his brother. There will still be hot dogs, and I will still try to snag one that is well done/blistered. Kid me liked ketchup; grownup me prefers mustard.

Things are both different and the same. Grandma Bev died right before I met Anthony, and Julie passed years before that. I know they both would have loved Anthony. Bev would have kissed him and left lipstick smeared on his bearded cheek. Vicki is still healthy, laughing hard, casting knowing looks, and smoking cigarettes.

“The old lady generation is dwindling,” my mom tells me over the phone. “Now we’re the old generation.”

She’s right. We’re not the kids anymore, either. Two of my cousins have babies, one who I haven’t met yet. In the pictures, her smile fills the whole frame. I wonder if they’ll play capture the flag when they are older, or badminton at the nets that get set up on the side of the house, shuttlecocks swooping across the blue sky.

“What should we bring?” my mom asks me.

“Potato salad.” Obviously. Hers is the best.

“But it will have to be the kind without mayo, since it’s going to be outside in the sun.”

Anthony has lived in the US for almost a decade now, but this will be his first family Memorial Day barbecue. He’s good at badminton, and grilling burgers, and hanging out in the sunshine. Everything will be just like always, and everything will be new.