I'm a food writer — with some food issues

“If you work in a bakery,” a woman in the back row hollered, “why are you so thin?” 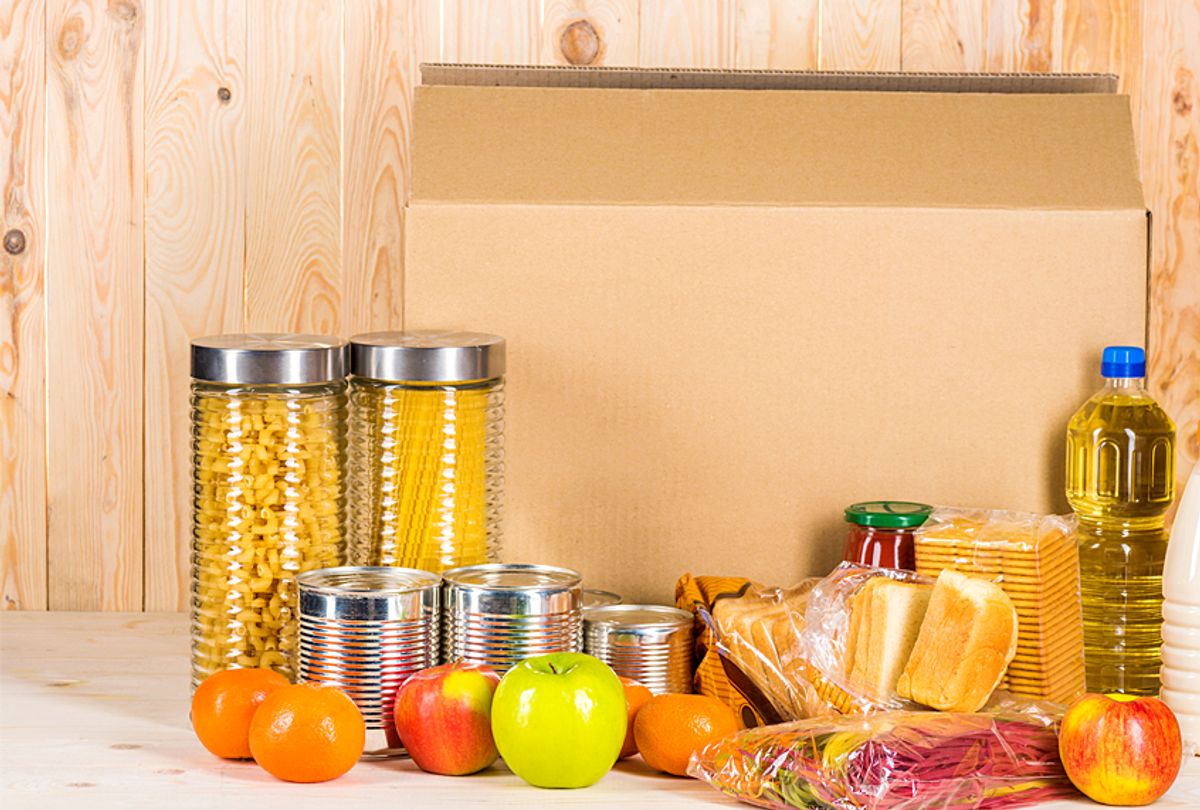 This story first appeared on Food 52, an online community that gives you everything you need for a happier kitchen and home – that means tested recipes, a shop full of beautiful products, a cooking hotline, and everything in between!

“If you work in a bakery,” a woman in the back row hollered, “why are you so thin?” She had short hair and big earrings and dropped the last word the way you would a dirty dish towel.

Back then, I did work in a bakery, a pie shop in North Carolina. My shifts started in the middle of the night, when roaches scurried along the sidewalk and the only other people awake were on the radio across the sea. I also worked as a recipe developer, a restaurant critic, and, every so often, a culinary instructor to home cooks.

That particular class was on latkes, Jewish recipes, the food of my mom and grandma and nana and this seventy-something with the loud voice and cool earrings. I wanted to ask where she got them. But instead I answered her question, sort of: “I run marathons.”

That felt more appropriate than getting into it. Than saying, I haven’t felt thin since the seventh grade when one of my friends — you know seventh grade friends — whispered behind me in the hallway that I had the biggest butt in school. I started wearing a lot of sweatpants and A-line dresses, but this didn’t preclude many a boyfriend and friend and co-worker from sharing “feedback” on my proportions until my cheeks flushed like peaches.

I could have told the woman in the back row that my torso is thin but my thighs complicate things, the way they lean toward each other like teenagers in the back of a movie theater. I could have told her that in college I used to weigh myself twice a day, used to do Food-Free Mondays until my friend, who used to be anorexic, suggested I go to therapy and I did, and the therapist, who also used to be anorexic, spent our first and last session talking about how she’s worn the same pants size for a decade. I could have told her that I chucked that scale years ago. That I haven’t bought one since. That “thin” isn’t a compliment.

But all I said was: “I run marathons.”

I don’t work at a bakery anymore. “Do you miss it?” a friend asked me over a work-night dinner, which wouldn’t have been possible with the bakery, which made answering easy: “No.”

I don’t miss it. Not really. Not the hours: falling asleep to the sun, waking up to the moon. Now, I work a sort-of 9-to-5, writing about food and developing recipes for Food52 — oh hey, hi, funny meeting you here! But I still get up in the dark because old habits die hard. Or something like that.

Eating is one of those, too: a habit. It sounds silly to put it like that — we all have to eat! But we also have to sleep. And everyone sleeps differently, and everyone eats differently.

I sleep a little and eat a lot. When I was a kid, any time my family had a get-together, there were so many snacks. Eggplant spread and crackers and cheese and olives and, my favorite, Grandma’s mushroom puffs. However many I ate was, inevitably, remarked upon: “Where does it all go?” setting up another relative to reply, “Hollow leg! Ha!”

A hollow leg? my 6-year-old self wondered. Could this be true? Was it bad?

Somewhere between worrying about that and learning the truth — whew! — I started worrying about other things. And that became a habit, too. Did I eat too much food for my age? My size? My gender? The answers here were tricky. If I wanted to look different, I could eat less. But that was tough because—how do I put this?—I didn’t really want to.

I love food, and I’m lucky to be able to say that my job is my dream job. Ever since I was a teenager, when I figured out that food writing was a thing, it’s all I ever wanted to do. And talk about, and think about. You know when people meet the love of their life and, before even knowing their name, they just know? I just knew. This is the love of my life.

But relationships are complicated and imperfect. Most of the time, that’s workable and okay. You find a way to get through the day, and then it’s another day. Other times, you have to change yourself or learn how to hide parts of yourself. Like when my relatives asked me, “Where does it all go?” and I always had a ready answer, even from the earliest age: “I figure skate.”

“How are you?” My skating coach would ask. It was a weekday, just before 6 a.m. I was 10 or 11, wearing a sparkly velvet dress with a sparkly velvet scrunchie and zip-up fleece covered in cat hair. “Tired,” I would say. “Then go splash some cold water on your face and come back with a different answer,” she said. And I would, and I did: “I’m good,” I said. “Well!” she said. “I’m well. How are you?”

I was in a Whole Foods the other day shopping for work when the cashier made my same mistake. “How are you?” I asked.

I get those. “Have you tried melatonin?” I said. “I used to work as a baker, that helped me.”

“I don’t like talking to people,” he said, “and I have trust issues.”

I started putting the bags in my cart. “I hope it gets better,” I said.

And I like to think it always does, if you try hard enough, or wait long enough, or both. That's what I did, at least, after my friend told me she worried about how much I worried about my body. Doesn’t everyone worry about their bodies? I wondered.

My first year in college, on non-Mondays, I exercised a lot — mostly the elliptical, with that little calorie-burning calculator. I adored that calculator. The higher the number, the less badly I felt about whatever I was feeling badly about that day. Probably food: Last night’s French fries. This morning’s bagel.

But also, I hated the elliptical. It was — what’s the word — boring. No technique or challenge or community, just a giant piece of plastic in a gym stuffed with sweaty lacrosse players and caption-only TV.

By that time I’d decided that I didn’t like my therapist, so I tried another approach: me as my own therapist. Which, because I’m me, meant rules — I find these comforting, soothing, like a knit blanket or bowl of matzo ball soup. Rule #1: No more Food-Free Mondays. Rule #2: The Exercise Test. Which went something like this. Why did I want to exercise? If the answer was because I’d eaten pizza, I said sorry — try again tomorrow. And just like that, I didn’t exercise regularly for years. I was waiting for something to come along, something meaningful, something I actually enjoyed.

I was almost 21 the first time I ran for more than 30 minutes straight. Within a few weeks, I signed up for a half-marathon, started researching full ones, created a schedule for every day for the next three months. I was in love: hopelessly, head-over-sneakers, googly-eyed, blabber-mouthed in love.

This was senior year of college. I was writing a cookbook instead of taking classes, so I had no schedule — but I’m not the kind of person who can’t have a schedule, so my training became my schedule. Today, 12 miles. Tomorrow, ice bath. Next day, 4 miles. Next day, weights. And on and on.

It was sort of like the first month of dating someone. Everything was the best thing. Running along the endless corn fields, up and down the hills, all alone, for hours and hours and hours. Running in Boston for my first race with my mom. Running by the Atlantic Ocean for my first marathon, where I cried at mile 17 because I thought I was going to die, and mile 26 because I realized I wasn’t going to die. Running around my college campus, naked.

That’s, well, exactly what it sounds like. My school had a track team and a cross-country team, neither of which I had any interest in. But we also had a streaking team, which I always admired from afar. Those people—hey, I recognize that guy!—ran naked. They took their bodies in stride. They didn’t worry about their butts or thighs. They didn’t worry about anything. At least not in that moment, as they sprinted through the dining hall, blowing kisses to everyone they passed by.

You didn’t have to be a runner to join the team, but I never thought about joining until I was one. The meets often happened in daylight and, in daylight, everyone would see me, and then what would happen? I didn’t like the idea of breaking rules. But more than that, I didn’t like the idea of being bare in front of strangers, or even worse, someone who might recognize me, like a new friend or an old boyfriend. Then I started running and something changed.

A month or so before college ended, mid-finals week, I went to the library with many strangers and friends and my new boyfriend—we were falling in love and he was perfect and my whole life was perfect—and we crammed into the stairwell, stripped down to our sneakers, tied bandanas around our faces like cowboys, then charged. We sprinted through the bookstacks, between the desks, out into the cold—at our college, it was always cold, even in the spring. My boyfriend grabbed my hand and we picked up speed, sprinting past the gym and dining hall and counseling center, faster and faster until our bodies were a blur.

And now everything’s perfect! Bad joke. Nothing’s ever perfect, right? At least, not for long.

I’m not going to tell you that I made coconut cream pie this weekend and had it again for breakfast and didn’t think twice about it. Or how I did yoga last night and my YouTube instructor, Adriene—have you met Adriene? You should!—told me, “Life is good. Do you know what’s better? Eating!” And I laughed and nodded. I’m not going to tell you how I haven’t weighed myself at home in years. That I’ve figured it all out. Tied it into a bow.

But I’ve also added some positive new rules. Like, I’m not allowed to talk to myself in a way that I would never, ever talk to someone else. I break that one a lot, but it’s there and that’s something. It’s nice to have something to work toward.

The other day, I was testing some tots and cheese, and I couldn’t stop testing because I couldn’t get them quite right and I had to keep trying. The first round of testing didn’t go so great. There was too little tot, too much cheese sauce, and the cheese on top became less crispy, more greasy. The second round: too much tot  — when they’re overcrowded, they steam instead of crisp — and too little cheese. I wanted it to be perfect.

So I started on the third round, and the fourth round, and on and on. After some time, I felt like I was half person, half potato. Medium-sized, extra-starchy, dusty skin; a patch of dirt above my left eyebrow, a warty-looking spud growing on my arm, and another, even bigger one on my hip. But whole, worthwhile, and good to cook with all the same.

Most days, I really believe that.