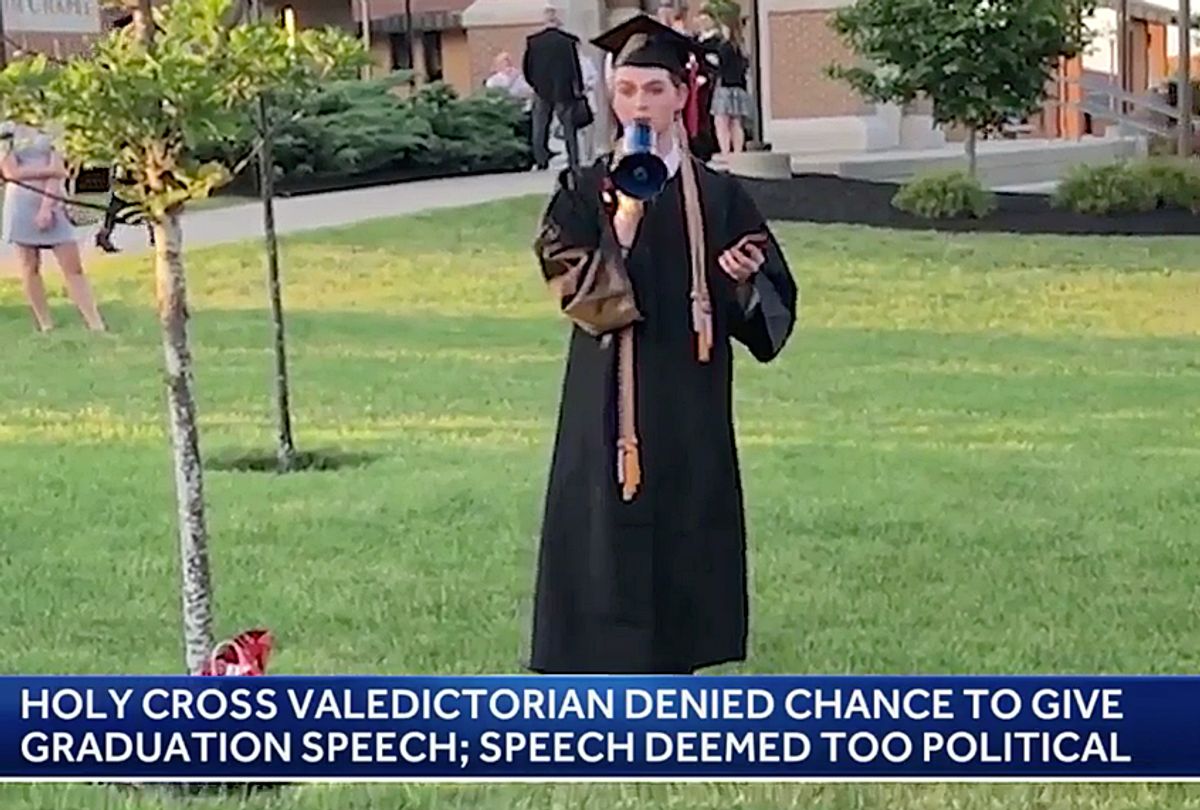 Valedictorian Christian Bales delivering his speech after the ceremony. (WLWT5)
--

Christian Bales, an 18-year-old valedictorian at Holy Cross in Covington, Kentucky, was barred from giving his commencement speech at the Catholic school's graduation last Friday because, according to the Diocese of Covington, his speech was "political and inconsistent with the teaching of the Catholic Church."

Bales, who is gay and identifies as gender nonconforming, told The New York Times that his speech did not address either fact. Still, he said the principal and other school officials relayed the news that he would not be allowed to speak the morning of his graduation, when there was no time for revisions.

"I did not think the speech was polarizing at all," Bales told the Times.

Most of his speech was filled with charges to his classmates, to use their voices; to be impactful — very much along the usual commencement speech line of empowerment and calls for students to be agents of change in their own community and beyond. For inspiration, Bales acknowledged the student activists in Parkland and highlighted some of his classmates who attended pro-life rallies.

But, Bales told the Times that he wore high heels and a floral jumpsuit to prom, and while the school did not object then, his mother, Gillian Marksberry, said the principal asked that she make sure Bales attend the graduation ceremony "in appropriate male dress," in dress pants and without makeup or accessories.

"He also told me that he had reached out to the superintendent of the diocese to ask for guidance because he has never had a student like Christian before and he didn’t know how to deal with it," Marksberry told the Times. She said the principal spoke to her the week of graduation.

"Christian and I spoke about appropriate dress and how it is necessary to conform sometimes," Marksberry added. "Christian understood and respected this request. He was prepared to honor the dress code."

The student body president, Katherine Frantz, was also not allowed to give her speech at graduation. Both students delivered their speeches after the ceremony with a bullhorn to a group of students, teachers and family members. "It was very empowering," Bales told the Times. "The people who were surrounding us were the ideal audience."

Aside from Bales' speech being too political, the Director of Communications to the Diocese of Covington said that the speeches were not submitted on time.

"School officials and representatives of the Diocese of Covington reserve the right to review and approve all student speeches to be presented in public at high school graduations," the statement said to the television station WLWT. "All speeches must be submitted in a timely manner. The student speeches for the Holy Cross High School graduation were not submitted for review before the deadline. When the proposed speeches were received, they were found to contain elements that were political and inconsistent with the teaching of the Catholic Church."

However, Bales said he was never alerted of a formal deadline, and when he and Frantz submitted their speeches a few days before the ceremony, they said Holy Cross teachers approved them. Frantz's speech was also categorized as too personal, she said. The main theme of her speech was growth and can be read in full here.