Even by Trump standards, that was quite a Twitter outburst — then Giuliani went on TV to explain it's all strategic 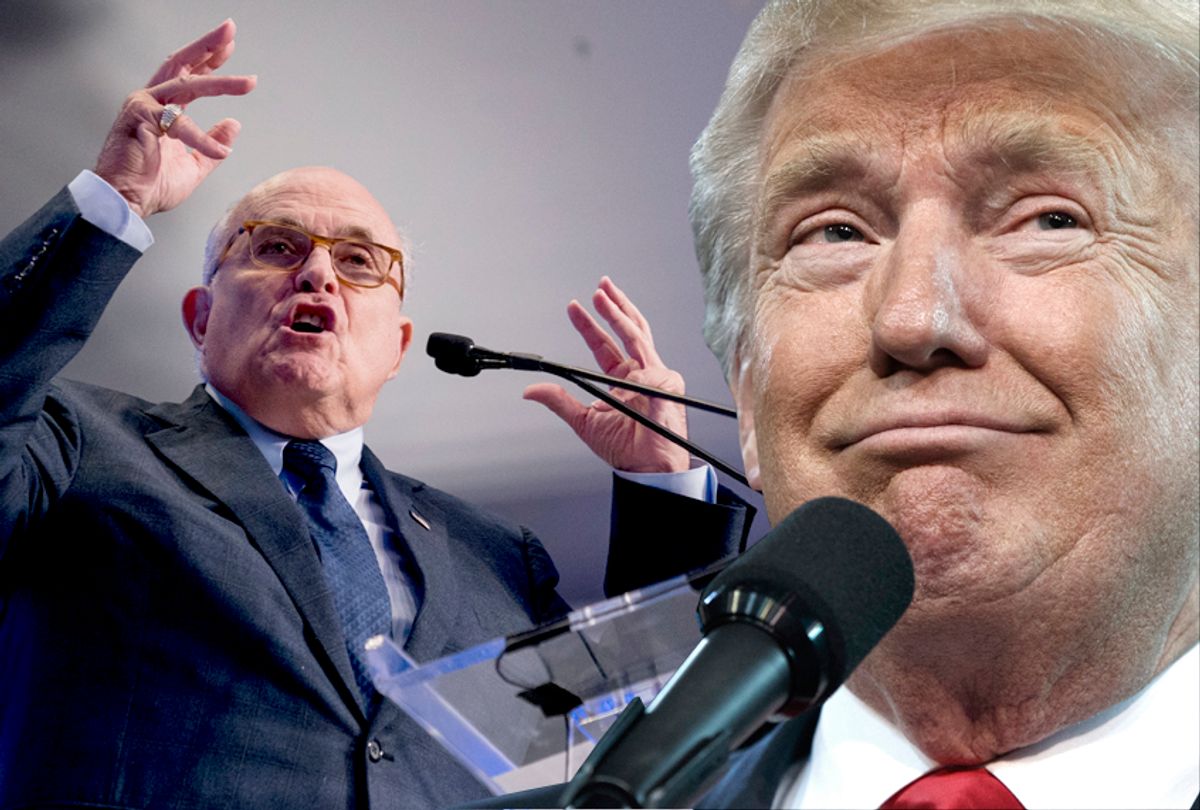 As one might expect in the Donald Trump era, instead of a long Memorial Day weekend of somber presidential ceremonies honoring the nation's fallen, we got a short wreath-laying ceremony and days of either self-aggrandizing or angry Trump tweeting and incoherent Rudy Giuliani blathering. Obviously the president was watching too much TV again, and his lawyer was currying favor by appearing on it and trying to tell him what he wanted to hear. But in the midst of all that craziness, we actually got a glimpse of the Trump legal strategy for dealing with the Russia investigation. It is really something.

The biggest brouhaha occurred around the following tweet, which was rapidly rebutted by reporters who had gotten the comment in question from a White House official during a background briefing. After that, the whole thing quickly devolved into an argument among journalists and others over the meaning of the word "lie."

Apparently, some reporters think it isn't a lie if the pathologically dishonest president has actually persuaded himself that it's the truth. I'll let others sort that out.

Trump also tweeted one of the more egregious "I know you are but what am I" comments of his tenure, in a cynical attempt to deflect criticism of his administration's inhumane border policy of separating kids from their parents at the border.

The horrible policy he speaks of is his own. Evidently he thinks he can persuade Democrats to build his godforsaken wall in exchange for allowing two-month-old babies to stay with their mothers rather than be forced into government detention. Essentially, he is holding infants and children hostage to get what he wants and blaming Democrats for refusing to give in to his demands. This is the logic of a thug, which is pretty much in keeping with how he operates in general.

Trump also pretended he hadn't sent that embarrassing seventh-grade breakup note to Kim Jong Un last week and tweeted in passing that the summit might be back on, writing, "Our United States team has arrived in North Korea to make arrangements for the Summit between Kim Jong Un and myself. I truly believe North Korea has brilliant potential and will be a great economic and financial Nation one day. Kim Jong Un agrees with me on this. It will happen!"

As Trump would say, "We shall see."

And he gave a moving tribute to the forgotten men and women of the Trump administration who gave their all for their country only to see the nation turn its back on them:

It's unclear exactly who he's talking about there. Perhaps it was fresh-faced Rob Porter, his former White House staff secretary who was forced out after multiple allegations that he was a violent domestic abuser. Or maybe it was the youthful and bright-eyed Anthony Scaramucci, a Wall Street fund manager who came to D.C. to serve his wealthy friend and mentor and flew too close to the sun. Poor, idealistic Sean Spicer and Reince Priebus just wanted to serve a GOP president no matter how unqualified and unfit he was and ended up having to go back on the GOP Wingnut Welfare dole, their reputations fully intact. It truly is a tragedy.

Aside from that, Trump devoted most of his tweeting energy to slagging what he calls the "witch hunt" and "Spygate," focusing his attention on Special Counsel Robert Mueller's team and blaming President Obama for failing to warn him about the Russian interference, while at the same time insisting that the whole story is a hoax. Here is a little amuse-bouche, just to get the flavor:

They did, of course. He got national security briefings from the moment he secured the nomination. They also briefed other Republican leaders such as House Speaker Paul Ryan and Senate Majority Leader Mitch McConnell, the latter of whom famously refused to allow the government to go public about Russian interference and threatened to say it was all partisan if anyone tried. Obama also personally warned Trump about Michael Flynn, and the new president's response was to immediately hire Flynn as his national security adviser.

You might be wondering what this new "13 Angry Democrats" meme he's coined is all about. He's speaking of the Mueller prosecutors, of course, and as absurd as this sounds, he seems to be referring to the movie "12 Angry Men," in which a single man is able to turn around a racist jury determined to find a defendant guilty despite little evidence of the crime. But in Trump's telling, he -- the man who demanded the execution of the innocent Central Park Five -- is the unjustly persecuted defendant and Mueller's prosecutors are the "angry" bigots determined to find him guilty. Indeed, in Trump's inverse reality, the racist juror No. 10 in the movie who declares "I'm sick and tired of facts!" must be Robert Mueller himself. This is too bonkers to be entirely thought out. It must be Trump hearing the echo of the title, vaguely recalling that it was something about a trial and unknowingly making the most ridiculously inapt allusion in history. No one could be that obtuse, not even him.

This fusillade of emotional tweets about the Russia investigation over the last week was helpfully explained by Rudy Giuliani, who did a tour of the Sunday talk shows and laid out the strategy for all the world to see. Salon's Taylor Link wrote up the bizarre interview with Dana Bash on CNN's "State of the Union," in which Bash said that Trump's team seemed to be waging a campaign to undermine the Mueller investigation. Giuliani replied:

Of course we have to do it to defend the president. It is for public opinion. Because eventually the decision here is going to be impeach or not impeach. Members of Congress, Democrats and Republicans, are going to be informed a lot by their constituents. And so our jury – and it should be – is the American people.

So Republicans largely, many independents, even some Democrats now question the legitimacy of [the Mueller investigation.] Democrats, I would suggest for their own self-interest, this is not a good issue to go into the midterms.

Basically, he's saying they expect this to end up with a serious impeachment debate, and since they cannot defend their client on the facts and the evidence, they are aggressively working to taint the jury pool. So now we know.

For all of Trump's lies, the one thing we can count on right now is that Rudy will go on TV and spill the beans.

The former director of national intelligence on what motivated Russian involvement in the 2016 election campaign.