Trump tweeted his complaint that Valerie Jarrett received an apology from ABC and he did not. Kimmel may know why 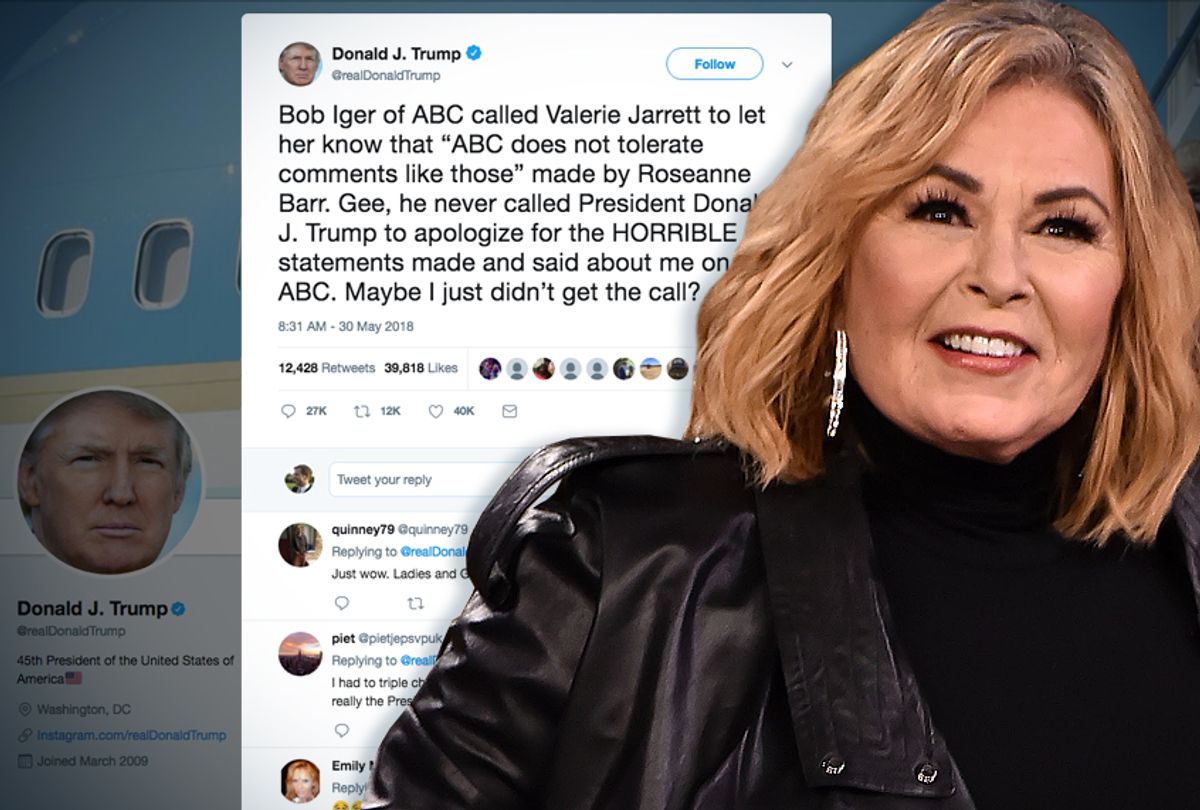 President Donald Trump on Wednesday made the Roseanne Barr controversy about himself when he criticized Disney CEO Bob Iger for apologizing to Valerie Jarrett for the comedian's racist tweets that led to the cancellation of the hit ABC sitcom "Roseanne."  Trump complained that the network failed to express remorse about statements made about the president on the network.

In a tweet, the president acknowledged that Iger apologized to Jarrett, a top advisor to former President Barack Obama whom Barr said is a combination of the Muslim Brotherhood and the "Planet of the Apes." However, Trump did not address the substance of what Barr tweeted or ABC's decision to pull the plug on "Roseanne."

Instead, he noted that Iger never called him "to apologize for the HORRIBLE statements made and said about me on ABC."

In response to Trump's hypothesis that he "maybe . . . just didn't get the call" from Iger, late-night talk show host Jimmy Kimmel pulled the ultimate trump card, writing, "Maybe you were out playing golf?"

On Tuesday, White House Press Secretary Sarah Huckabee Sanders told reporters during an Air Force One gaggle that the president has been "extremely focused" on the upcoming summit with North Korea and other matters, not Roseanne's controversy.

Trump's Wednesday tweets suggest he is focused on "other things," though — particularly the drama with "Roseanne" — a sign that the president is far more interested in talking about the culture wars rather than things related more closely to his job.

Previously, Trump has publicly praised the show's "unbelievable" ratings and personally called the comedian to congratulate her. "Look at Roseanne. Look at her ratings," Trump said during a March speech in Ohio focused on infrastructure. "They were unbelievable . . . and it was about us."

It seems that Trump and the disgraced comedian are putting on the same show by pulling out the victim card. Earlier on Wednesday, Barr retweeted a comment from a follower that claimed her co-stars didn’t deserve sympathy because "they threw her under the bus instead of having their non-racists' co-stars back!"

To the actor who plays Gilbert's son on the show, Michael Fishman, Roseanne responded to his statement criticizing her racist post, by accusing him of throwing her under the bus.

"I created the platform for that inclusivity and you know it.ME. You throw me under the bus. nice!" the comedian tweeted.