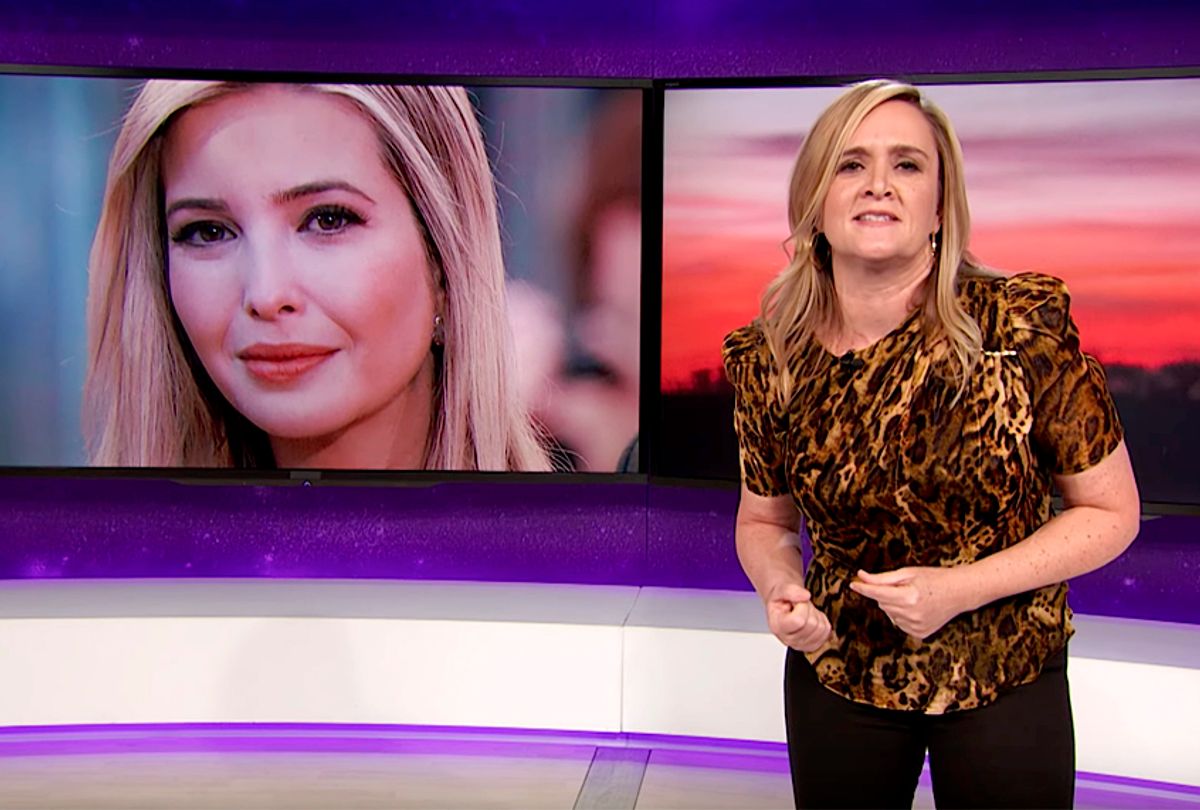 UPDATE: Samantha Bee has issued the following apology in response to the backlash:

Samantha Bee really did not want to discuss Roseanne Barr's racist tweet that led to the cancellation of her ABC sitcom "Roseanne" this week on "Full Frontal." Instead, she started a controversy of her own.

"We're going to talk about racism and I just popped an Ambien, so buck up everyone!" she said during her monologue as Barr's photograph flashed briefly on the screen behind her. "Believe it or not, something even more important was on Twitter this week."

The host acknowledged that Trump was "half right" when he blamed the policy on Democrats. "No, Donald Trump didn't invent this issue, he's just making it so much worse," she said.

"So now, after decades of ignoring the issue, Americans are finally paying attention," the host said later.

That sparked Bee to plea to Ivanka Trump, President Donald Trump's eldest daughter and senior White House adviser, who came under scrutiny after she shared a photo of herself and her son on Twitter last Sunday amid reports her father's regime had lost track of 1,500 immigrant children who were separated from their parents and placed in foster care in the last three months of 2017.

"Ivanka Trump, who works at the White House, chose to post the second most oblivious tweet we've seen this week," Bee said, taking a jab at Roseanne. "You know, Ivanka, that's a beautiful photo of you and your child, but let me just say, one mother to another, do something about immigration practices, you feckless c**t!"

"He listens to you," Bee continued. "Put on something tight and low cut and tell your father to f**king stop it. Tell him it was an Obama thing and see how it goes.

Conservative blogger Erick Erickson tweeted, "So ABC just fired Roseanne for her tweet. Will TBS fire Samantha Bee for her actual on-air monologue? Seems to me that calling Ivanka a 'feckless c*nt' is just as bad as suggesting Valerie Jarrett is an ape."

"All they have to do is not act insane. And they can't do it," far-right political activist Stephen Miller wrote in response to a tweet criticizing the left's response to Ivanka's picture with her son.

Kyle Morris, a contributor at the conservative news publication the Daily Caller, said, "If this statement had been addressed to a child of a former president, Samantha Bee would be out of a job."

Akash Chougule, director of policy at Americans for Prosperity, a conservative political advocacy group founded by the Koch brothers, wrote: "Roseanne deserved to get fired for her comment. Samantha Bee called Ivanka a 'c*nt' on air and Keith Olbermann routinely calls the President a 'motherf*cker.' Do you think either will get fired?"

"Maybe see why so many Americans think there's a media double-standard for liberals?" he concluded.