Medication abortion is safe enough to do at home. Arkansas wants to claim women need a hospital for it 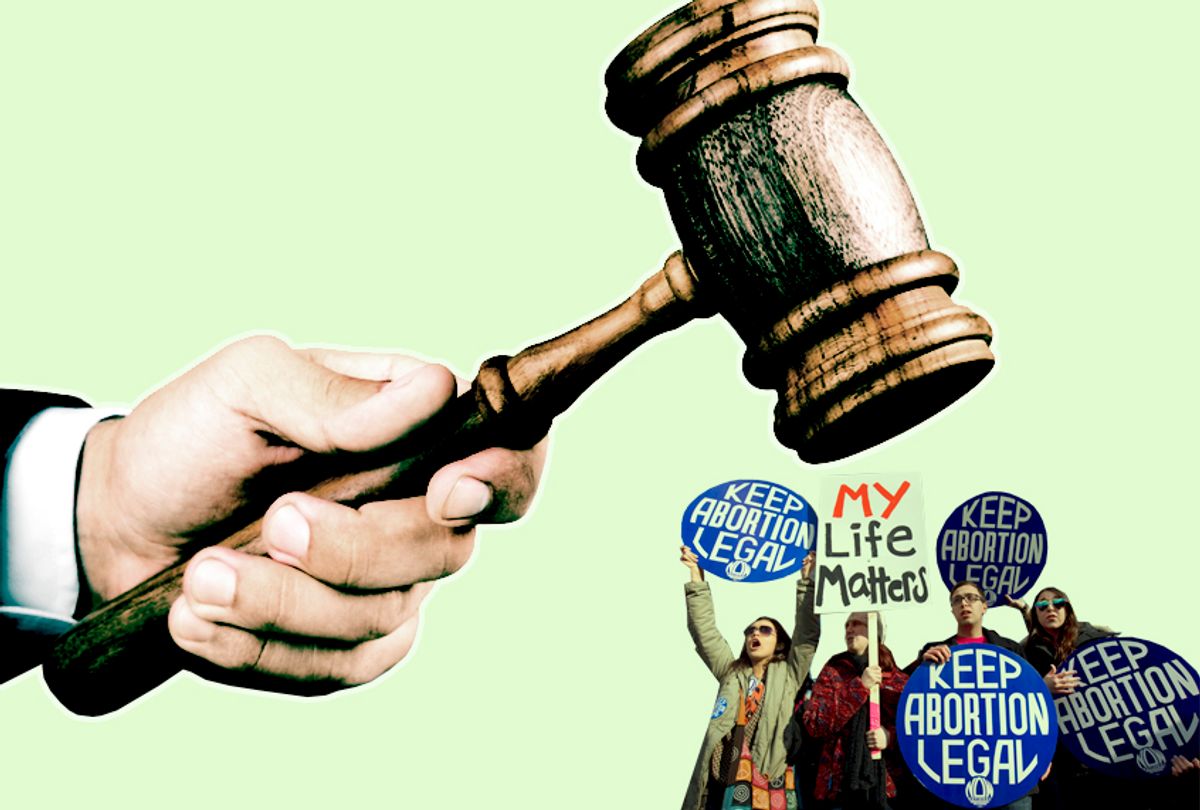 Despite the Supreme Court striking down Texas' medically unnecessary regulations on abortion in 2016, the justices, in a perplexing move, opened the door this week for red states to return to the strategy of eliminating legal access to abortion by burying clinics in red tape. On Tuesday, the court refused to hear a case challenging an Arkansas law that requires clinics who provide abortion pills to contract with doctors who have hospital admitting privileges. It's a standard designed to sound reasonable on paper, but one that is in fact nearly impossible to meet: Most hospitals only extend admitting privileges to doctors who use them, and abortion is an outpatient procedure that does not require a hospital visit.

Dawn Laguens, the executive vice president of the Planned Parenthood Federation of America, emailed a statement describing this law as a backdoor way for Arkansas to be "the first state to ban medication abortion" and noted that it will reduce the number of clinics in Arkansas from three to one.

"Accessing abortion in Arkansas was already a struggle for many patients, and it is now even harder to come by," said Dr. Stephanie Ho, a family doctor in Arkansas who is also a fellow with Physicians for Reproductive Health. "For many patients — particularly those who are young, low-income, living in rural areas, or people of color — being forced to travel hundreds of miles is a serious, even insurmountable barrier."

Ian Millhiser of ThinkProgress worried that "anti-abortion judges are likely to read the court’s non-decision in Jegley [the case in question] as a signal that they can once again start playing games" with prohibitive abortion laws. It may serve as an encouragement to stop taking seriously the court's 2016 decision in Whole Woman's Health v. Hellerstedt, which was supposed to force states to adhere to scientific evidence when crafting abortion regulation.

Here's what is quite clear: This Arkansas law is an overt rejection of scientific evidence regarding the safety of medication abortion.

Research by Advancing New Standards in Reproductive Health (ANSIRH) that looked at nearly 55,000 abortions performed in 2009 and 2010 found that less than one-quarter of 1 percent of patients experienced serious complications, and only 1 in 50 women had any complications at all, most of them extremely minor. Fewer than 1 percent of women who get abortions require any emergency room treatment.

“That rate is lower than the complication rate for Tylenol or Viagra," explained Ushma Upadhyay, a public health researcher for ANSIRH. "So it is really surprising that Arkansas could enforce a law like this, given the current evidence and what we know about the safety of medication abortion.”

The notion that abortion is dangerous is particularly ridiculous when it's compared to the only viable alternative, which is continuing a pregnancy. Almost 29 percent of hospital deliveries have some kind of complication, compared to 2 percent of abortions. The major complication rate for childbirth is nearly six times higher than the rate for abortion, and a woman is 14 times likelier to die giving birth than because of an abortion.

Even when it comes to the slim chance that a woman might feel the need to go to a hospital after an abortion, Upadhyay argued, the admitting privileges required under the Arkansas law are functionally useless, because medication abortions are done at home, using pills provided by a doctor's office.

“In the rare chance that a woman has a complication from a medication abortion, she’s already at home, which could be 100 miles away from where she got the abortion pills in the first place," Upadhyay explained. "So the likelihood she would go to the hospital where the abortion provider has admitting privileges is almost nil."

In the real world, when women have complications after an abortion, they don't call the doctor and arrange the lengthy process of being admitted. Most just go to the local emergency room, where, research shows, 67 percent will be released without treatment because their symptoms did not indicate any serious complications.

Medication abortion is as safe as aspiration abortion done in a doctor's office, and even in the rare instances where hospital care is needed, women are better off going to the emergency room than trying to get a hospital admittance. So why did Arkansas single out medication abortion for onerous requirements? Likely in a punitive effort to shut down this simple abortion method as much as possible.

Medication abortion is “a much easier method to offer," Upadhyay said. "It doesn’t require special equipment. It’s a way of offering more outlets, more places where women can get an abortion with minimal effort.”

Another ANSIRH study, published earlier this year in the Journal of Medical Internet Research, found that the gradual erosion of abortion access, largely due to unnecessary red tape, has created a problem of "abortion deserts," meaning an area where women have to drive 100 miles or more to get care. Having the ability to offer medication abortion helps some clinics that might not otherwise be able to offer abortion services do so.

Upadhyay noted that many women prefer medication abortion because they may feel it’s "more natural" to be at home, where the experience is "more like a miscarriage" than a medical procedure.

This level of convenience attracts extra opposition from abortion opponents, who are keen to make abortion as onerous and punishing as possible, if they can't ban it outright. In Arkansas, the strategy will almost certainly be effective. Previously, there was a clinic for every 223,000 women of reproductive age in the state. Now there will be only one for every 668,000.

According to the Guttmacher Institute, there were 4,590 abortions obtained in Arkansas in 2014, the last year on record. The state's sole remaining clinic will have to handle 88 abortions a week — more than 12 a day, not counting holidays — in order to keep up with that demand. That is literally an impossible workload.

"Patients seeking these services are less likely to get the kind of individualized attention, serious conversation, and emotional support that doctors at less taxed facilities may have offered," Justice Stephen Breyer argued.

“It is beyond rational belief that H.B. 2 [the Texas law] could genuinely protect the health of women, and certain that the law ‘would simply make it more difficult for them to obtain abortions,'" Justice Ruth Bader Ginsburg wrote in concurrence.

Yet this is exactly what the refusal to overturn this medication-abortion law in Arkansas has done: Harmed women's health and reduced the access and quality of care they can get in the state. Which was always the point, of course, a reality underscored by the highly specific attack on a form of abortion that's safer than taking Viagra.

Latest news and most recent guests from SalonTV