Can lawsuits slow the tide of right-wing conspiracy theory? Seth Rich's family wants to find out

As right-wing conspiracy theories metastasize, is there a legal way to limit the damage to people's lives? 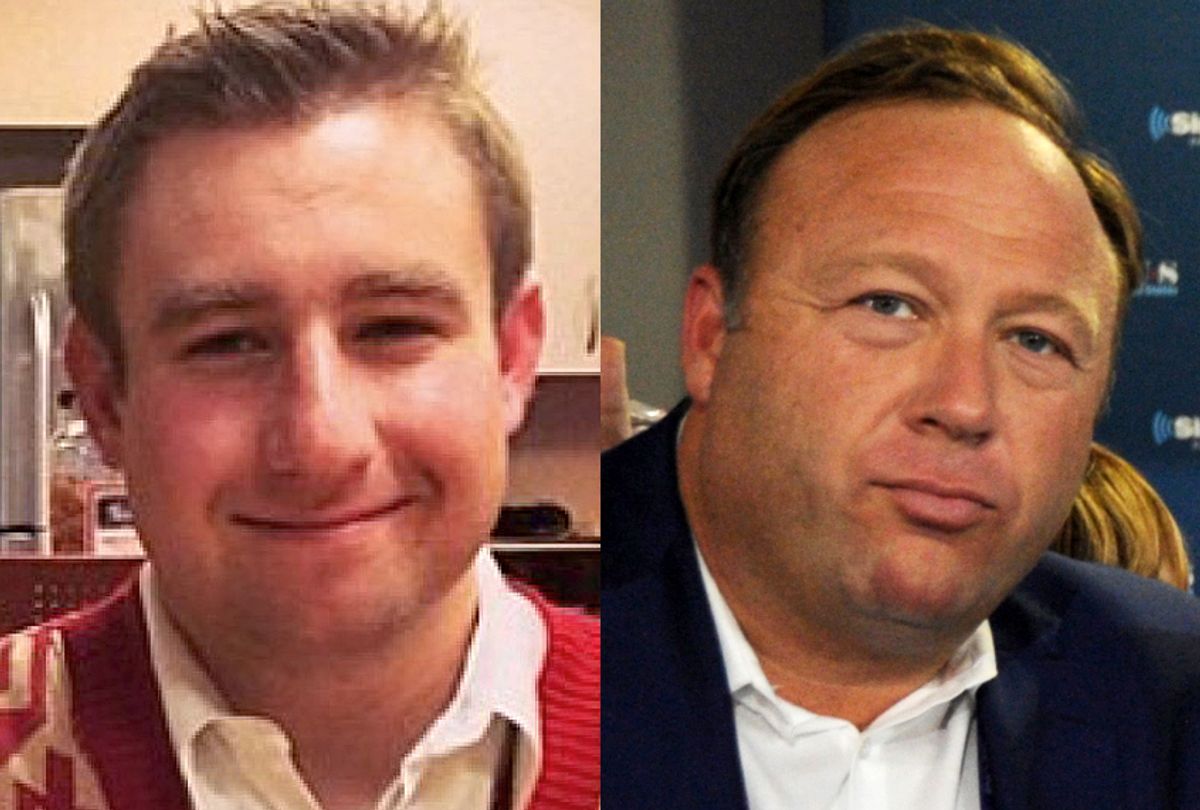 In the era of Donald Trump, conspiracy theories aren't just getting more prominent and more numerous. They're also becoming more personal. One of the hallmarks of the modern era of social media-fueled, right-wing paranoia is the increasing tendency of conspiracy theorists to target not just politicians and celebrities for their lurid myth-making. Now such concoctions may affect the lives of ordinary people who, in the past, would likely have not had a high enough profile to attract this kind of obsessive rumor-mongering.

Now the targets are turning to the courts to fight back. The parents of the Sandy Hook massacre victims are suing Infowars founder Alex Jones for spreading conspiracy theories alleging that they faked their children's deaths. (Perhaps in an effort to shield himself, Jones has backed away from such theories and now says he believes the killings actually happened.)

Brennan Gilmore, a Virginia activist who happened to film the attack that killed Heather Heyer at the Charlottesville protests last summer, is also suing Jones and a blogger behind Gateway Pundit for conspiracy theories meant to discredit him. And the family members of Seth Rich, a Democratic National Committee staffer murdered in July 2016, in what police say was a botched robbery, are suing Fox News and others for stoking conspiracy theories that Rich, rather than Russian agents, may have been behind the hack of Democratic emails given to WikiLeaks -- and was murdered in retaliation.

Now the circle of litigants has opened up further, as Brad Bauman, a public relations expert who has volunteered as the Rich family's spokesperson, is also suing a series of conservative figures for defamation, alleging that they have spread conspiracy theories accusing him of covering up for a nefarious Democratic Party plot.

Bauman's case is of particular interest to me, because it illustrates the way Trump-era conspiracy theories metastasize, growing ever more complicated and strange as conspiracy theorists attempt to integrate conflicting evidence into their overarching theory — and how, in the process, the number of people who become targets for harassment and abuse can grow.

“Having watched what Brad went through," Melissa Ryan, a progressive activist and friend of Bauman's, said to Salon, "it gave me a new understanding for the kind of hell that conspiracy theories can wreak on a person’s life that I wouldn’t have understood otherwise.”

Bauman was unable, for legal reasons, to speak to Salon. But his legal complaint lays out a (relatively) simple story: As the conspiracy theories around Rich's murder started to grow louder, friends and colleagues of Rich asked Bauman to help the family, which he says he did on a volunteer basis for no payment. Soon, the right-wing rumor mill began to focus on Bauman, and accusations began to fly that he was an agent working for the DNC to help cover up Rich's murder. Bauman's suit says he was then doxxed by internet trolls (meaning that his home address and other private information was revealed) and that articles on right wing websites and social media accusing him of engaging in a cover-up have caused him emotional distress and damaged his business.

I reached out to Ed Butowsky, a financial adviser who lives in Texas and is one of the defendants in Bauman's lawsuit. Butowsky has been active on right wing sites like Gateway Pundit and WorldNetDaily in pushing the idea that Bauman was somehow "assigned" by the DNC to the Rich family. (Bauman denies this and says, in his suit, that he has never worked for the DNC.)

The conversation was a maddening glimpse into the rhetorical spiderwebs that form around conspiracy theories.

“It’s a nuisance lawsuit. There’s absolutely nothing behind it," Butowsky insisted, having called me back at 7:38 a.m. after a day of phone tag. "I still don’t understand this, nor many of these other lawsuits against me.”

Butowsky is being sued not just by Bauman, but by the Rich family for allegedly ingratiating himself with them under false pretenses, in order to promote his conspiracy theory about their son. Butowsky hired a private detective, claiming he was acting on the family's behalf, but allegedly used that detective instead to push insinuations, on Fox News and other outlets, that Rich was murdered as part of a Democratic conspiracy.

Our brief conversation — under 15 minutes — was whiplash-inducing. At one point, Butowsky told me, “Fly down to Dallas. I’ll give you your Ph.D. in the Seth Rich story."

But when I followed up by asking him why he's so interested in Rich's death, he got miffed: “I don’t have a huge interest in this story.”

Then how could he claim, I asked, to give someone a Ph.D. on a topic he claimed to have little interest in? "Because I’ve been sued by everybody," Butowsky said.

I noted that all these lawsuits came after Butowsky -- as he admitted in a 45-minute interview published on Gateway Pundit -- reached out to the Rich family and hired a detective to look into the case. All of which, I suggested, constituted a reasonable definition of someone "interested" in this story.

At that point, Butowsky became agitated, and insisted that instead of asking him any further questions myself, I watch the 45-minute interview at Gateway Pundit. Then he got off the phone.

That interview at Gateway Pundit is a confusing mess of digressions, self-pity and elaborate, complex insinuations that are largely impenetrable to outsiders to the Seth Rich conspiracy-theory crowd. The crux of it, as someone who had to watch it for professional reasons, is that Butowsky would like viewers to believe he was a disinterested party who, for somewhat mysterious but totally innocent reasons, ended up spending huge amounts of time ingratiating himself to this family and thousands of dollars on a private detective to look into an internet conspiracy theory.

This itself provides a major insight into how these conspiracy theories work in the age of the internet. The dense complexity, the crushing amount of content that no human being has the time to thoroughly consume, the use of insinuations to push noxious ideas while retaining plausible deniability: All this serves to disorient people such that they give up even trying to understand the truth of the situation.

“They’re undermining the ability of the average American to discern what is true, what is false, what to believe and what not to believe," Bauman said on a press call in September, regarding what he's learned from being caught up in this.

"Even if you’re not actively sharing conspiracy theories, you’re sort of exposed to it," Ryan argued, saying this leads to "the dehumanization" of the figures involved, even for right-wing audiences who don't necessarily follow or believe all the ins and outs of whatever conspiracy theory is burning up conservative media at the moment.

For instance, Ryan continued, many right-wing figures at first "weren’t comfortable sharing conspiracies about the Parkland students, calling them crisis actors." But after a month of such content swirling around the internet, the students started to seem less human, and ordinary people who consumed right-wing media became "very comfortable sharing doctored images of the students that weren’t true.”

During September's press call, Bauman attested to the power of humanization, noting that after trolls had made his phone number public, he decided to just start taking the calls when conspiracy theorists rang him. He said that most of them, after a person-to-person conversation, had dialed down their outrage and paranoia, which made him feel it's possible to "bring people back to a place where they’re thinking much more clearly about things."

Unfortunately, however, getting every conspiracy theorist on the phone to hammer it out is a task more onerous than watching every conspiracy theorist's lengthy YouTube video. Which is why these theories are now being brought to court, not just to correct false or damaging assertions, but to exact real-life consequences on people who spread them. In their suit against Fox News and Butowsky, the Riches explicitly state that they "seek to help prevent similar malicious and reckless conduct to protect future innocent victims from similarly becoming political fodder."

Whether that will work remains to be seen. In the meantime, the ecosystem supporting all these conspiracy theories, which all too often target ordinary private citizens, continues to expand through social media, blogs and internet forums. Far more must be done to protect people who, often through no fault of their own, become enmeshed in major news stories that make them into leading targets of conspiracy theorists.