The art of war: "Brothers of the Gun" illustrates the Syrian War with dignity and depth 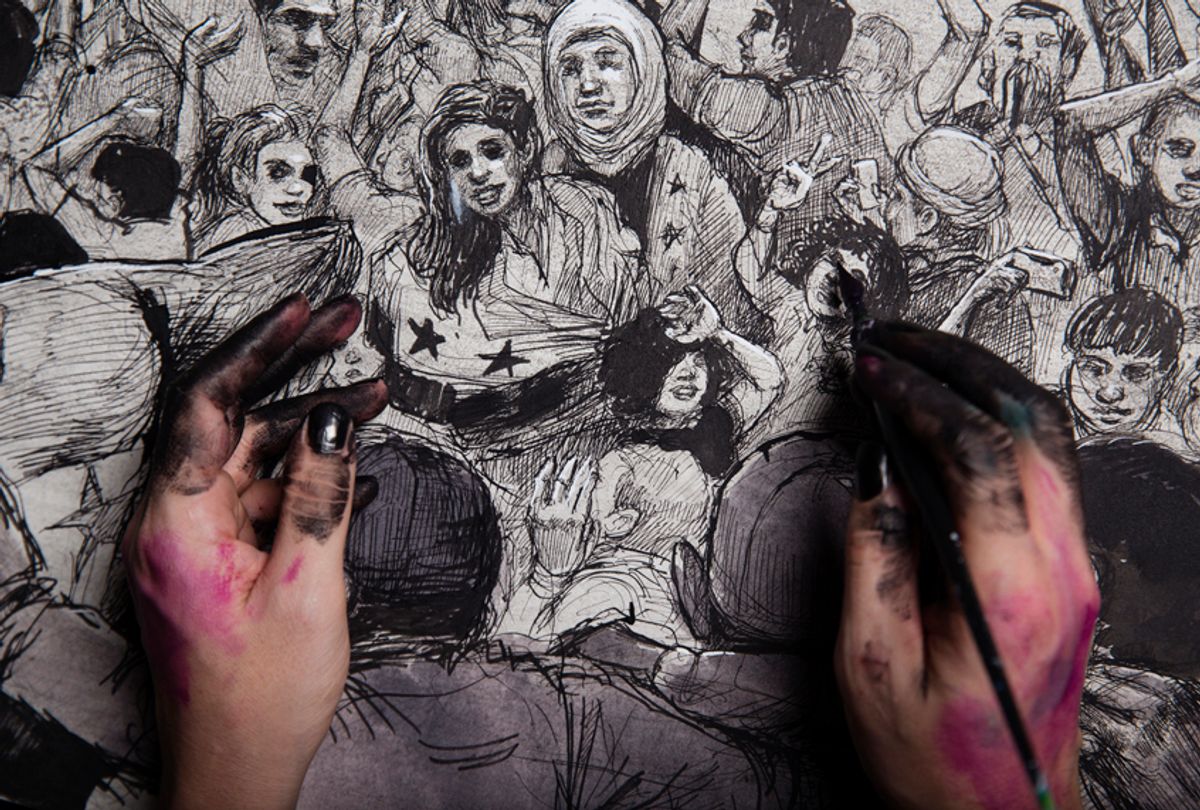 Award-winning artist and journalist Molly Crabapple is changing how the world views war and resistance movements. Through her ink and splatter style illustrations, Crabapple has covered the Occupy Wall Street protests in New York, the anti-austerity movement in Greece, terrorist hearings on Guantanamo Bay, and worked with Jay-Z for a project on the contradictions of the War on Drugs.

On a recent episode of "Salon Talks," Crabapple shared the inspiration behind her latest assignment, co-writing and illustrating "Brothers of the Gun: A Memoir of the Syrian War" with Syrian journalist Marwan Hisham.

It traces Hisham's story from pre-war Syria, through the early aughts of the people's revolution, which was anchored in demands against poverty and injustice, and how that revolution was co-opted and betrayed, over and over again. The memoir is tangled in universal questions of identity, nationality, blunder, religion and tragically shows how Syrian civilians have become the overwhelming casualties in the process for such answers.

Crabapple and I sat down to talk about her collaboration with Hisham, who co-wrote "Brothers of the Gun" while living in his hometown in ISIS-occupied Raqqa, and why people resisting in any capacity fuels her art.

How did you connect with Marwan?

I started covering the Syrian war in 2013. My first piece was about refugees in Lebanon, the Beqaa Valley. There is a small group of people that would kind of discuss the war on Twitter. Some of them were Syrians. Some of them were journalists and analysts and Marwan was one of them. At first, I got to know Marwan as a source. He gave me information about life in ISIS-occupied Raqqa, which is his hometown. But then as I started to learn Arabic, we got to be pretty close friends and we did a series of collaborations for Vanity Fair where he would take photos at massive, lunatic personal risk to himself, because he’s just a crazy baller journalist and then he would send them to me and I would draw from them. After the third of those, we decided we wanted to do something better, something bigger or something more cohesive, and we decided to do a book.

Why was illustrations important for this memoir?

I feel like the Syrian War is perhaps the most photographed, documented war in history, with a possible exemption of course of Palestine. But, I feel that with these photos, sometimes all these photos of broken bodies, of broken cities can commove sort of numbness.

The illustrator talks about "Brothers of the Gun"

One thing that’s really incredible and I think important in the illustrations in this book, is while Marwan talks about absolute devastation and violence and hardship, there's still a dignity to the photos. It's not just the worst experiences on display for the shock factor. Was that conscious for you as you were illustrating?

Very much so. There is of course a reason to show photos of people dead in a gas attack for instance and that's to prove war crimes, but art doesn't — it’s not going to be used at a tribunal. It's not going to be used at the International Criminal Court. Because of that I wanted to do something else. I feel that so many of the portrayals of the Middle East that we see in America, it's just as this like terrible, savage war-torn country that is always fighting each other. I actually feel this narrative is so dangerous and it actually regularizes more attacks and more bombings on the Middle East. We really wanted to show people with dignity, with humanity, with nuance, with depth, with interiority.

Can you talk about your communication process? In the book Marwan talks about being in this internet cafes surrounded by ISIS, holding his phone at a perfect angle so no one could see his screen. Can you talk about how that happened? How that worked? How you guys communicated about writing and illustrations and deadlines and things like that?

I was in Raqqa two different times in the course of writing this book. The first time, the internet was pretty normal. He worked at an internet cafe, he had access to that and we would just communicate on WhatsApp. Then he went to Turkey, in parts so that we could start writing the book together and I flew to Turkey about 12 times in the course of this and basically, I would just sit next to him for 10 hours and type, type, type, edit, edit, edit, type, type, type. But then he went back to Raqqa and that was — I mean, probably the most horrifying point of my life, certainly, and that was something where he would be at an internet cafe and he would send me WhatsApp images of the guy in a suicide belt in front of him. At that time, Marwan was filing for the New York Times and for Foreign Policy from these internet cafes. The daring that he had and the commitment to journalism is something that can’t be overstated.

Can you talk about your illustrative process for the book?

Well, at first, these ones were all done in a paper with pen and ink and wet acrylic and lots of splatter and stuff. They’re all done by hand. But for my first pieces, Marwan would send me these photos and I would draw quite faithfully to those photos. Of course, I would do things like change people’s faces. But, as the book went on, we started wanting to draw things that there were no photos of, that there couldn’t be photos of, like enslaved Yazidi women that were brought into Marwan’s cafe, or memories of Marwan’s religious school. And for work like this, I would work so closely with Marwan, like I’d interview him and then he would do sketches. Sometimes, he’d even pose for me. I really think of these as our co-creations, these drawings.

Then, for other work like several drawings of protests that there are these huge crowd scenes, what I would do is I would look up citizen videos of those protests and I mean, this video is taken by people who’re running away from tear gas, running away from the government security services, it’s crazy. But if you look at it and you freeze from it over and over again, you can kind of get panoramic shots. I would take maybe a hundred fifty freeze frames. I would print them all out. I would lay them out. I would sometimes repose models because once you freeze frame that stuff, it just looks like blurs, it doesn’t look like people anymore. Then, I would try as closely as possible to get these big panoramic scenes that would make you feel as if you were there.

What developed your interest in the Middle East and Syria?

I think, the reason that I was initially drawn to covering Syria was perhaps the same reason many journalists were, which was that in 2011, I saw Arab Spring as almost a sister movement. . .I felt a great deal of sympathy. Then, in Syria, as the government cracked down, it got worse and it grew bloodier and bloodier and as the protests developed into a civil war, there was a lot of confusion about what was going on and I wanted to go and speak to people myself so that I would learn. I had the intense privilege of meeting many, many people of all walks of life. Both when I was reporting in Lebanon and Iraq. I went to Syria for one day only. Also, I stopped into camps in Greece. I was, I guess, compelled by both the intense courage and commitment I saw by a lot of people and also by the devastation and horror and betrayal of the entire world.

Can you talk about some of the challenges in writing about the Middle East for an American audience?

One of the things Marwan really didn’t want to do is Marwan hates spoon feeding. He hates the idea that he would write a book that is 'Syria is a country in the Middle East. It is predominantly Muslim.' This is demeaning to us all. We really struggled and I think we got a good balance in between making something that’s accessible to Americans, but that’s not babying them. It’s not talking down to them. That’s not writing 'Syria 101' for dummies book.

When we’re doing this, we actually looked at "The Handmaid’s Tale," the book, a lot, because Gilead is a place that doesn’t exist. It’s unfamiliar to Americans. But Margaret Atwood conveys a complete world and she’s able to convey and portray that without everyone saying, 'Handmaidens are the women who wear red dresses and have to bear the commanders children.' She shows.

There’s also so much propaganda that we are fed about the Middle East. One thing that really struck me in the beginning of the book is when Marwan talks about what if felt like for him and his peers when the U.S. invaded Iraq and this fear that Americans were coming to just kill Muslims, that unshakeable fear and that’s something we never hear. I’m wondering if it was also a goal for this text to work as a corrective or a reclaiming of the narrative, in a way?

Oh, God, yeah. I mean, people from the Middle East are so, so dehumanized in American discourse. For the right, 'they’re scary terrorists, must ban.' But, even if there a lot of Liberals, there’s this well meaning but ultimately dehumanizing like, 'Look at these pitiful refugees, they need our help.'

Which is so humiliating. Right? – What we wanted to do with this book is we wanted to show Syrian characters with all of the depth and nuance and all of the interiority and especially all of the complexity that you would give to any other character. We didn’t want to make it something where it’s like everyone is cardboard cut out heroic revolutionary or heroic mom. But we also didn’t want to do the usual cardboard villain, 'Oh, my God! He has a beard. He’s an Islamist. He’s a baddy, baddy, baddy.' We wanted to do something where we showed them as these people really were.

The other part that was really fascinating and important for me as a reader was the way both of you contextualized the betrayal of the revolution. Often in the U.S. we get this narrative that there’s the regime and then there’s the rebels. When in fact, there’s so many rebel groups with different factions and that, well, maybe some people’s ideas changed as those rebel groups have gained power, but there was an earnest revolution that began in 2011.

There are countless, countless, young men or countless men, not just young, that picked up guns and basically joined the equivalent of neighborhood watch groups to protect their area and to fight a regime that they thought of as a fascistic and irreconcilably violent. However, once external backers started to get involved, Qatar and Saudi first, but also the U.S. and Turkey, the dynamics really, really started to shift and also groups like Al Qaeda that later took huge advantage of it.

Marwan talks about these European ISIS fighters coming in as like colonizers.

In this book, there’s literally a guy from Belgium with a college degree, who goes on to sexually enslave Iraqi women. They’re exactly the same as any Belgian who is going into the Congo to murder people and rape people.

I like to say your illustrative beat is people resisting.

I was always attracted to stories of smart people, who perhaps were being done by very unfairly by the world, but who are also fighting back against that.

Why do you think illustrations are particularly powerful?

I think, because they’re rarer.