Trump wants Samantha Bee fired over her Ivanka diss but praised Nugent, who once called Hillary Clinton the same 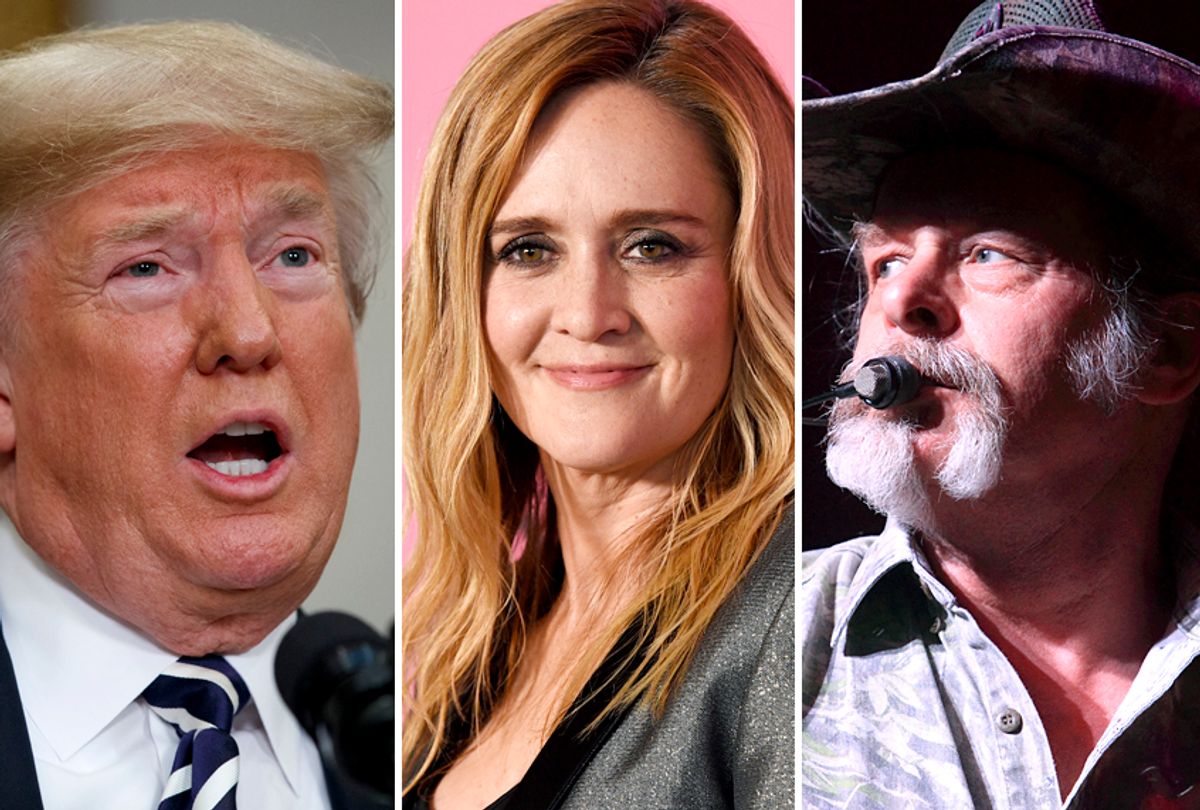 "Why aren't they firing no talent Samantha Bee for the horrible language used on her low ratings show?" Trump tweeted. "A total double standard but that's O.K., we are Winning, and will be doing so for a long time to come!"

Bee's remark outraged may conservatives who said she crossed a line and drew cries of a liberal double standard. In a statement, the White House said Bee's show was not "fit for broadcast, and executives at  Time Warner and TBS must demonstrate that such explicit profanity about female members of this administration will not be condoned on its network."

One observer pointed out the hypocrisy in the Trump administration's criticism.

Oliver Willis, a writer at the progressive news site Shareblue, uncovered a 1994 interview in which musician Ted Nugent used the same offensive language to refer to then-first lady Hillary Clinton. He pointed out that Nugent's remark has done nothing to effect his reputation among conservatives. In fact, Republicans, including President Trump, praised him. Willis tweeted a recent photo of Nugent shaking hands with the president in the White House:

"I keep hoping for consistency too, Oliver," Clinton commented in response to the tweet. "Though I’m not holding my breath!"

The picture was taken on April 19, 2017, when Trump dined with Nugent, Kid Rock and Sarah Palin at the White House. The two musicians and the former vice presidential candidate also posed together for a withering photo in front of Hillary Clinton's official White House portrait.

Nugent's inflammatory remark about Clinton surfaced in a July 27, 1994, issue of Westword, an alternative weekly newspaper based in Denver, in which he lambasted a wide-range of political topics.

"You probably can’t use the term 'toxic c**t' in your magazine, but that's what she is. Her very existence insults the spirit of individualism in this country," he said. "This b**ch is nothing but a two-bit wh**e for Fidel Castro."

Nugent's comments have incited controversy in the past. Ahead of the 2012 presidential election, the musician spoke about killing then-President Barack Obama at a National Rifle Association meeting in St. Louis. He never apologized for that comment.

The "Full Frontal" house, on the other hand, issued an apology for her Ivanka diss Thursday afternoon, saying that she had "crossed a line." Bee was criticizing inaction on the migrant crisis taken by the president's eldest daughter, who recently came under scrutiny after she shared a photo of herself and her son on Twitter amid reports her father's regime had lost track of 1,500 immigrant children who were separated from their parents and placed in foster care in the last three months of 2017.

Indeed when it comes to women, the President of the United States is no hero. Trump himself has made lewd, sexist comments about women, most infamously in the "Access Hollywood" tape that was unearthed during the 2016 election, in which he bragged about committing sexual assault.

Trump has also called women "fat," "beautiful piece of ass," and said, "You have to treat them like s**t." He has also threatened the wife of Senator Tex Cruz (R-TX) and joked about dating girls under 17. That is in addition to calling a woman the c-word. Jennifer Lin, then a financial correspondent for the Philadelphia Inquirer, wrote that Trump once referred to her as "that c**t."

The president's latest tweet comes days after ABC pulled the plug on Roseanne Barr's hit sitcom, "Roseanne," after the comedian made a racist remark, during which she joked that Valerie Jarrett, senior adviser to former President Barack Obama, is a combination of the Muslim Brotherhood and the "Planet of the Apes."