"I am not food correct," says Eddie Hernandez, chef and author of "Turnip Greens & Tortillas"

Born in Mexico, the chef Eddie Hernandez now calls Atlanta home, where he breaks every cooking rule he can find 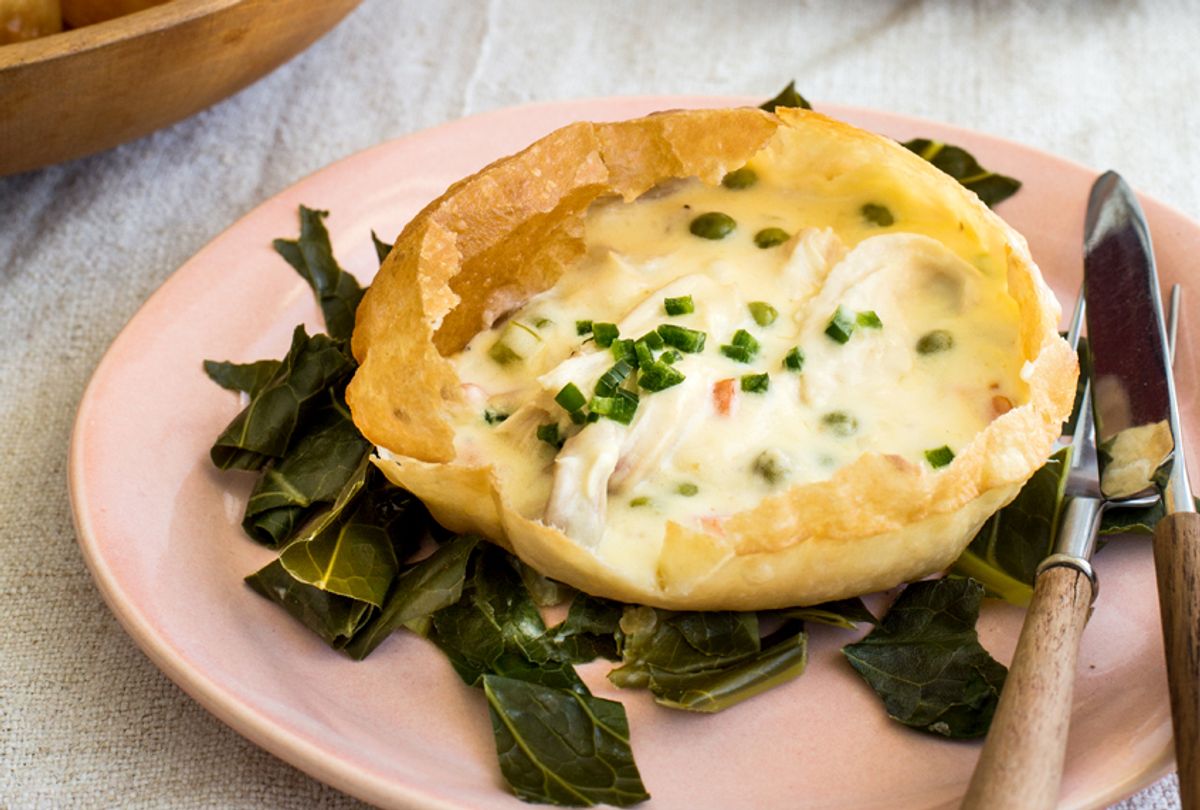 I live in a city where I can listen to a bluegrass band on one night, and on another night I can go hear the blues. During football season I cheer for my two home teams — the UGA Bulldogs and the Georgia Tech Yellow Jackets — except when they play each other, and then I am a Tech fan all the way.

When I have a few days off, one of my favorite things to do is take a long, slow drive on the back roads of rural Georgia, along the bayous of Louisiana, or through the mountains of Tennessee. Wherever I go, I stop at every little café and roadside stand I can to try the fried chicken, the barbecue, the boudin sausage, or whatever it is the locals eat. As I taste, I start to get ideas about how I would recreate them — my way. In Nashville I try the famous hot fried chicken at a place called Hattie B’s and think how it would taste cut into strips and wrapped in a tortilla together with lime and jalapeño mayonnaise and shredded lettuce to cool the spice.

So what if it doesn’t work out? I will try it again until I get it right, or I will move on to the next thing. That is how I educate myself. I am not afraid to fail. Since I was a boy, I have always loved to figure out how to take things apart and put them back together — whether it was a truck engine or a tamale.

I have no family photographs to show because my family didn’t own a camera. We didn’t keep scrapbooks. I only have my cooking to trigger the memories. I was born in Monterrey, Mexico, one of the largest cities in the country. It lies in the foothills of the Sierra Madre Oriental about 115 miles from the Texas border. We lived in a working-class neighborhood of cement-block houses occupied by big families — up to thirty people. Every morning as we kids walked to school — we walked pretty much everywhere — there would be five, ten, fifteen moms out sweeping the streets, criticizing our wardrobes.

“Why are you wearing that shirt?” “I hope you changed your socks!”

My mother fed our family home-cooked food every day. We had lunch between twelve and one, and dinner between six and seven. Always. If you weren’t there, you would either have to heat your meal up yourself, if there was anything left, or go hungry. The other kids and I did our share of arguing and fighting, but never at the table. That was our time to sit down together in peace.Everything we ate was fresh. No one had gardens in my neighborhood, other than maybe some herbs or chiles in pots, because it was the big city and there wasn’t space. Instead the mothers went to the market every day. They bought what looked good to them and was a good price.

Our markets were nothing like the mainstream supermarkets in the U.S. They were more like open-air farmers’ markets with butcher shops, bakeries, and stalls filled with tomatoes, fresh corn, avocados, peppers, cabbages, zucchini, mangoes — you name it. Living in a climate that rarely dips below 70 degrees, even in winter, we were used to having access to a huge assortment of fresh produce year-round. Most people didn’t have refrigerators in their homes, and in poor rural areas, that’s often still the case. Electronics had to be imported and were very expensive. My family was fortunate enough to have those appliances. We even had a blender! But we still shopped daily. It was our way of life.

My dad was a mechanic. He worked on a steam engine in the railyard, and I watched him with fascination. He wore suits every day to work and came home covered in diesel oil, looking like he just crawled out of the earth. After he showered, he would put on a fresh suit and go out looking like a million bucks. I was nine when he died.

I lived with my mother and grandmother, neither of whom had a husband. Then my stepfather, Leonardo, came into the picture. And when he and my mother had kids — five of them — I couldn’t help feeling neglected. I started to make my own course in life.

My mother’s brother was like a father figure to me. Uncle José taught me mechanical skills like welding, bolting, and painting cars. He also taught me a lot about food. We ate things no one would eat but us — like goats’ brains. He would buy whole pine nuts for us to crack and eat.

He never bought them shelled because he thought it was more fun to crack them ourselves. When I got older, we liked to drink and listen to music together. But it was my grandmother who gave me the desire to learn to cook. Her name was Consuela, but everybody called her Chelo. She was a strong-willed entrepreneur who owned seven different bars and convenience stores around Monterrey. One place was three doors down from where we lived. It didn’t have a name. Everyone just knew it as Chelo’s place. As a kid I hung out there.Nobody messed with Chelo.

She was a big woman, at least 5 foot 8, with blond hair and blue eyes. Her voice could make grown men run. We used to joke that she’d never die because neither God nor the devil would take her. She knew how to handle all kinds of situations. But whenever she raised her voice to me, I raised mine back. I think she liked that. We respected each other.

I’m not going to say Chelo was a chef, because back then there was no such thing as a chef. Everybody just cooked. Guys who would go to her pub for a beer liked the fact that they could get a good meal and free homemade snacks there. She was big on fresh food, and she never made the same things two days in a row. I loved watching Chelo cook things that I had never seen anyone else make. Pickled pork skin was one of my favorites.

In Mexico it’s a good bar food and a side dish for tacos. I would ask her to make some just for me. But she would say, “If you want to eat it, then learn how to make it yourself, because I’m not going to be here one day and who is going to cook it for you?” And so I learned, and eventually became pretty good at it. I taught myself to drive a truck when I was twelve, and Chelo would send me to the market to pick up groceries.

I got my first job delivering newspapers when I was thirteen, and when I was fifteen, I bought a car and opened a torta stand on the street. I made a pot of carnitas — pork meat simmered in oil until tender — and served it on bread three different ways: with cold salsa made with tomatoes and chiles; with cooked salsa; and plain, with just some chopped avocado. It looked fancy but it was as simple as could be.

Many customers have told me this is the best potpie they’ve ever tried. The creamy chicken and vegetable filling, punched up with sour cream, fresh thyme, and jalapeños, is hard to beat. But what really makes it memorable is the presentation. Instead of a traditional crust, I drop flour tortillas one at a time into hot oil for just a minute, long enough for them to puff up and turn golden brown. Then I carefully crack the tops open and spoon the filling in. I recommend using La Banderita tortillas, as they are a little thicker than other brands and puff up better. If you don’t want to mess with the hot oil, you can substitute baked puff pastry shells or even hot biscuits for the tortillas.

2 jalapeños, stemmed and minced (remove some or all of the seeds and membranes for less heat)

3 to 4 tablespoons Blond Roux (below)

½ cup roasted, peeled, stemmed and chopped jalapeños (remove some or all of the seeds and membranes for less heat) (or use canned Ortega)

Place the chicken pieces and 1 tablespoon of the salt in a large pot, cover with water, and bring to a boil.

Reduce the heat to maintain a simmer and cook just until the chicken is tender, about 30 minutes.

Remove the chicken from the pot and cool slightly. Reserve 2 cups of the stock for the gravy. Remove and discard the skin and bones. Shred the meat and set aside.

Melt the butter in the pot over medium heat. Add the carrots, onions, celery, jalapeños, and remaining 1 teaspoon salt and cook, stirring frequently, for 5 to 7 minutes, until the onion is translucent. Add the thyme and garlic and cook for 1 minute. Add the reserved stock, cream, and sour cream. Bring to a boil and cook for 2 minutes. Stir in the cheese and cook until melted.

Lower the heat to medium. Stir in 3 tablespoons of the roux, and simmer, stirring frequently, for 3 minutes. Stir in a little more roux if needed until the mixture reaches the desired thickness. Add the shredded chicken and the peas, lower the heat, and simmer for 3 minutes. Taste and adjust the seasonings as desired. Keep warm.

To make the puffy tortillas: Line a platter with paper towels. Heat 1 1/2 inches of oil in a Dutch oven or other large, heavy pot over high heat to 400 degrees. Add the tortillas, one at a time. Let each cook for about a minute, until puffed up and lightly browned, spooning oil over the top as they cook (do not flip). Remove to the paper towel–lined platter to drain. Allow the oil to return to 400 degrees between each tortilla.

To serve, poke a hole in the top of each tortilla, ladle 1 to 1 1/2 cups of the chicken mixture into the hole and garnish with the roasted jalapeños.

Makes about 1/3 cup or enough to thicken 1 quart of liquid.

I like sauce and gravy—and lots of it. You can thicken sauces and gravies with a paste of flour (or cornstarch) and cold water, or make a beurre manié the way the French do, by blending softened butter and flour with your fingers or a spoon, and stirring in bits at the end of the cooking. You have to be very careful with the methods, though, because if you don’t cook the sauce long enough, it will have a raw flour taste. But you will never have this problem if you make a blond, or white, roux, as cooks do in Louisiana. In a blond roux, the butter and flour mixture is cooked, and it thickens without imparting much flavor and with little risk of lumps forming. Unlike the more time-consuming dark roux used for gumbo, this cream-colored roux is hard to mess up and takes only a few minutes to make.

Melt the butter in a small saucepan set over medium heat. Add the flour all at once and whisk vigorously until smooth. When the mixture thins and starts to bubble, reduce the heat to low.

Cook for 1 or 2 minutes, whisking slowly, until the mixture smells nutty and toasty and is still lightly colored. Cook for 2 more minutes, stirring occasionally.

Cool at least to room temperature before adding to hot liquids. The roux stores well, tightly covered, in the refrigerator for up to 1 month.