Washington Post decrees: U.S. must help destroy Yemen in order to save it

After a year of silence on the U.S. role in Yemen, Washington Post editors now argue bombing is the humane option 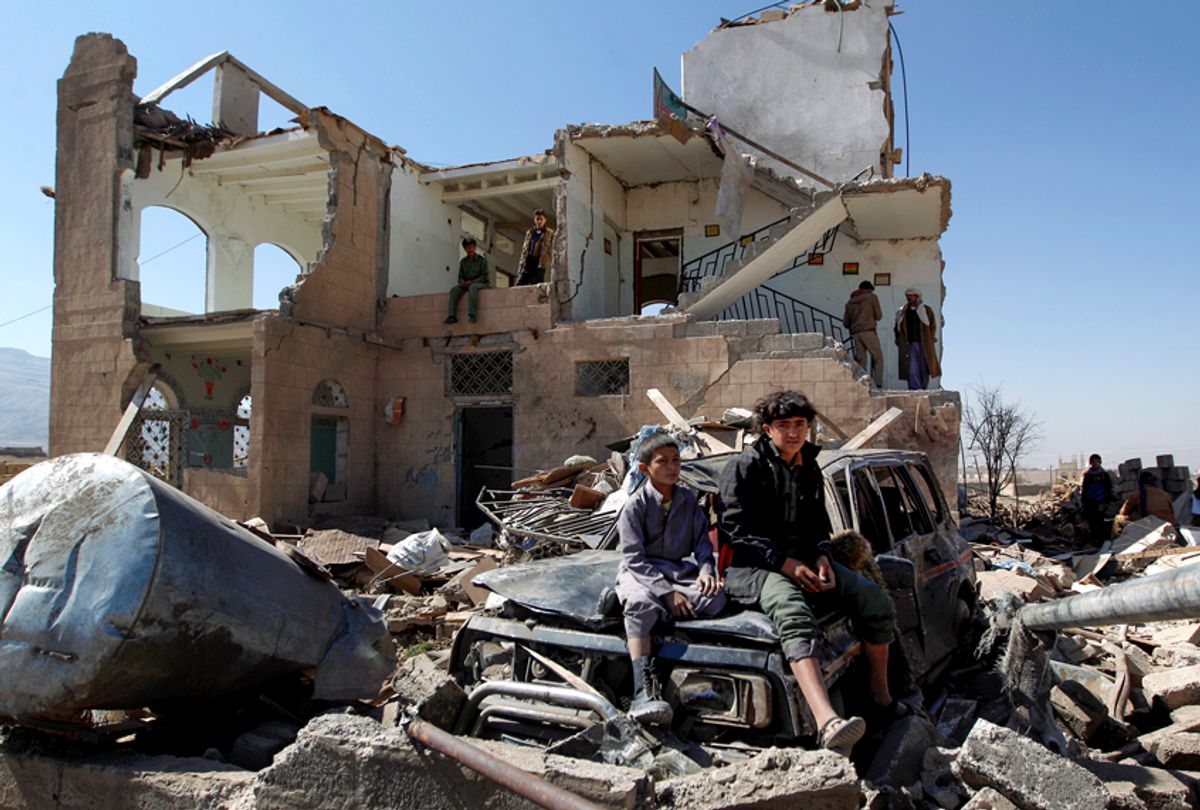 Children sit amidst the rubble of a Saudi-led coalition air strike two days earlier on the outskirts of the Yemeni capital Sanaa on November 14, 2016. (Getty/Mohammed Huwais)
--

Over the past year, the Washington Post editorial board has routinely ignored U.S. involvement in the siege of Yemen — a bombing and starvation campaign that has killed over 15,000 civilians and left roughly a million with cholera. As FAIR noted last November, the Washington Post ran a major editorial and then an explainer detailing the carnage in Yemen without once mentioning the U.S. role in the conflict — instead pinning it on the seemingly rogue Saudis and the dastardly Iranians. 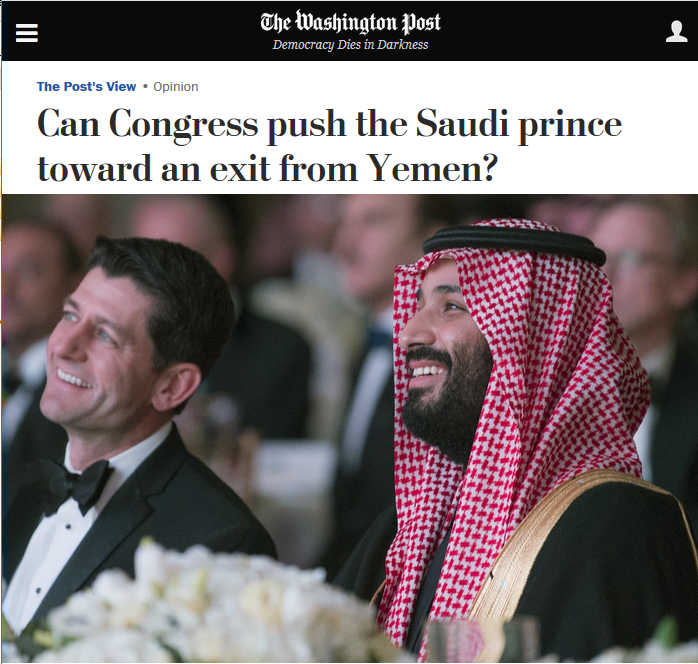 This was in addition to an op-ed that summer by editorial page editor Jackson Diehl, which not only ignored the U.S. support of Saudi bombing but actually spun the U.S. as the savior of Yemenis, holding up Saudi Arabia’s biggest backer in the Senate, Lindsey Graham, R-S.C., as a champion of human rights.

In recent months, however, the Post has charted a new course: vaguely acknowledging Washington’s role in the bloody siege, but insisting that the U.S. should remain involved in the bombing of Yemen for the sake of humanitarianism.

In two recent editorials, “Can Congress Push the Saudi Prince Toward an Exit From Yemen?” on March 24 and “The World’s Worst Humanitarian Crisis Could Get Even Worse” on May 28, the Washington Post board has cooked up a new, tortured position that the U.S. should not stop supporting the Saudis — a move 30-year CIA veteran and Brookings fellow Bruce Riedel argued in 2016 would “end the war overnight” — but mildly chide the Saudis into committing slightly fewer war crimes while moving towards some vague exit strategy.

In the March editorial, the Post insisted “the United States … should use its leverage to stop this reckless venture,” and that President Trump should “condition further American military aid on humanitarian relief measures.” A step in the right direction, right? Quite the opposite. When one reads closer, it’s clear that while the Post wanted Trump to moderately roll back the most egregious war crimes, it still lobbied against the Lee-Sanders bill that would have actually ended the war. 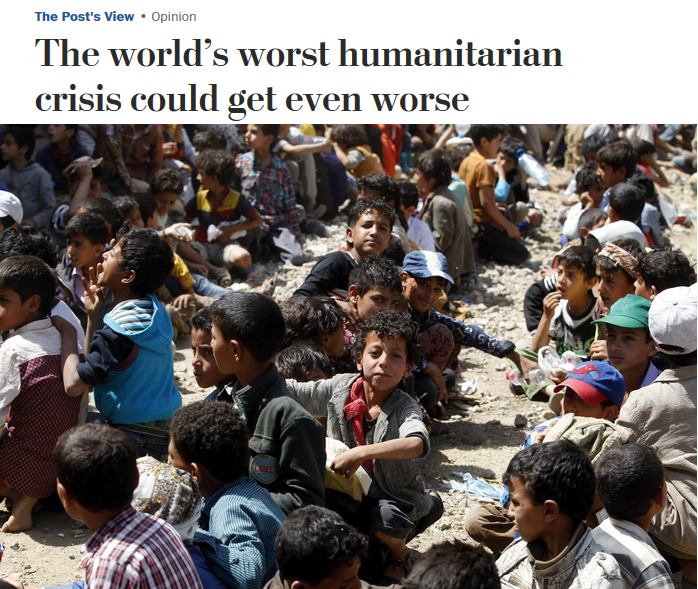 Last week’s editorial took this faux-humanitarian half-measure one step further with this bit of revisionist history:

Both the Obama and Trump administrations have offered limited support to the Saudi coalition, while trying to restrain reckless bombing and the exacerbation of the humanitarian crisis.

The idea that Obama and Trump offered the Saudis “limited” support is a glaring lie. U.S. support — from logistical support to refueling to selling $110 billion in arms to political cover at the UN to literally choosing targets on a map — has been crucial to carrying out the three-and-a-half-year campaign. Again, according to one of the most white-bread, establishment commentators, U.S. support isn’t ancillary, it’s essential. Without it, there is no bombing campaign.

The problem is, the Washington Post is charged with a contradictory task: to act as a Very Concerned champion of human rights while propping up the core tenets of America’s imperial foreign policy. It’s an extremely difficult sleight-of-hand when the U.S. is backing a bombing campaign targeting some of the poorest people on Earth, so their support of this slaughter is actually spun as an attempt to rein it in. The U.S. is going to bring down the system from the inside!

The most logical way the U.S. can stop the slaughter of Yemen is to stop engaging it in it. But to the Washington Post, this runs against the U.S. policy of bombing and/or sanctioning anything that has the most remote connection to Iran, so this simple course is just not on the table. Instead, the Post’s propaganda objective — after years of simply ignoring the U.S. role altogether — is to paint its participation in war crimes as a way of preventing slightly worse war crimes; a good cop to Saudi’s bad cop. This permits business as usual while maintaining the pretense that the U.S. cares about human rights — in other words, the Post’s basic ideological purpose.

Check out the biggest stories and latest guests on SalonTV.