Trump's EPA head grabs headlines for his greed and corruption, but his attack on science is more destructive 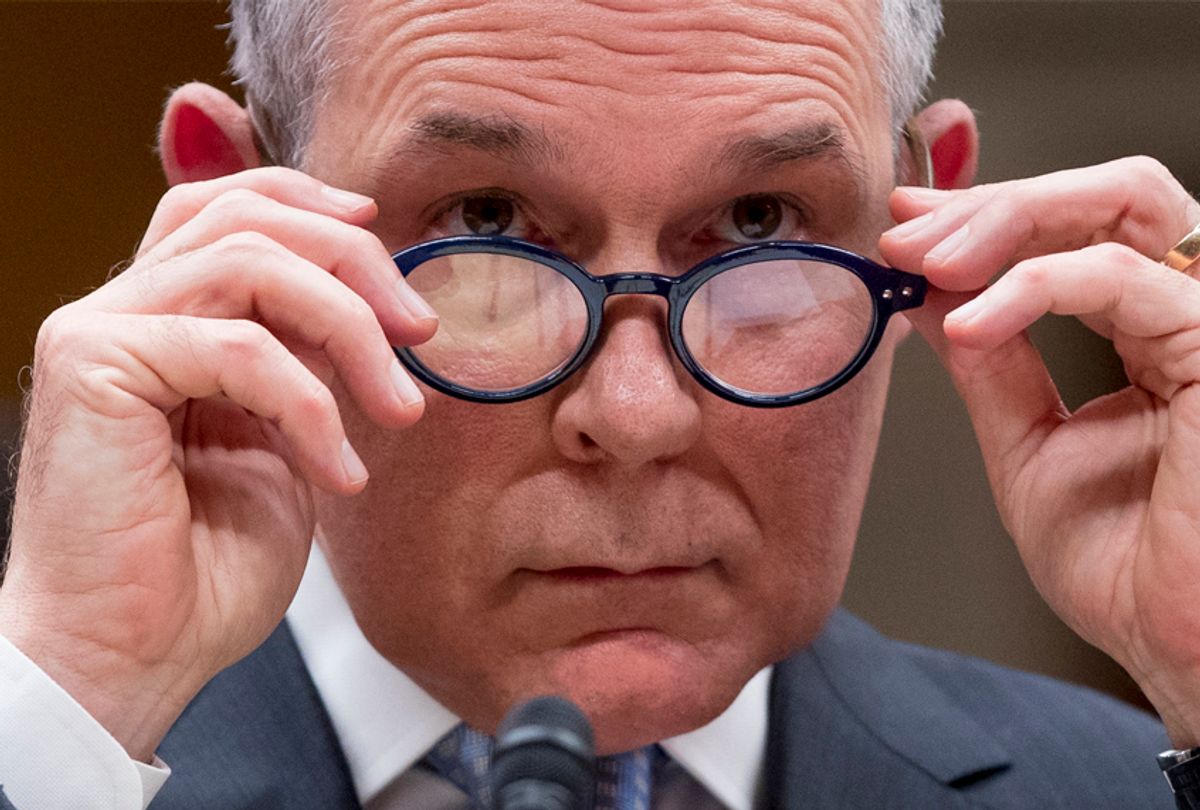 Despite heavy competition, EPA head Scott Pruitt has emerged as the most self-evidently greedy and corrupt figure in Donald Trump's administration. Pruitt's desire to live like a Hollywood depiction of a wealthy drug lord on the taxpayer dime has drawn enormous media attention, social media chatter and official investigation, and it's no wonder. It seems every story of his antics is more ridiculous than the last. In just the past couple of weeks, for instance, it's been reported that Pruitt spent $3.5 million on security in the past year, that he was allegedly using government aides to apartment hunt for him and even that his office bought 12 custom pens from a jewelry store for $1,560 with government funds.

As aggravating as all these stories of corruption may be, they may be less important, in both the short and long run, than what Pruitt is doing to the EPA itself -- and not just its budget. Pruitt's hatred of science may actually exceed his love of free money. He's doing everything in his power to destroy the importance of scientific evidence in the decision-making process at the agency tasked with protecting people's air and water.

Throughout May, emails obtained by environmental groups through FOIA requests show that Pruitt and his team at the EPA have been eager to create the illusion that climate change is controversial rather than settled science and have engaged in shady practices in order to do so. Publicly, Pruitt announced he wanted a "debate" over the issue, a position no doubt struck to make him look fair and open-minded. In reality, emails showing communications with right-wing groups that deny the scientific realities of climate change make clear that Pruitt's thumb has been firmly on the scale.

Toward the end of the month, another cache of emails shows that top EPA officials had been coordinating with climate-denial groups to stack audiences at EPA public hearings with people who buy into the conspiracy theory that climate change is an international hoax.

These disingenuous tactics are necessary because the EPA, on its website, declares that its mission requires decisions "based on the best available scientific information." So Pruitt's strategy is to find as many ways as he can to minimize what scientific information is available. The "debate" strategy — so dumb that even the White House nixed it — is clearly about injecting so much noise into the discourse that it confuses people, and especially federal judges, about the realities of the evidence. Another strategy is to monkey-wrench the information-gathering efforts of the EPA so there's a disconnect between real scientific evidence and what is used to make policy decisions.

Last week, the EPA's science advisory board met and, as USA Today reported, "the makeup of the panel sent an unmistakably clear message: industry and state officials are going to have a larger say in shaping environmental and public health policies under the Trump administration."

Not only has Pruitt predictably appointed industry-friendly people hostile to science to the board, he's found a backdoor method to push more environmentally conscious scientists off the board. Pruitt is barring those who have gotten research grants from the EPA from sitting on committees, claiming it represents a conflict of interest. This excuse doesn't hold water, of course, as Pruitt wants to have industry voices in the process, a far more overt conflict of interest. It's a convenient excuse to push out people who have knowledge and experience from serving as advisers.

Even this rejiggered science advisory board balked at some of Pruitt's practices and demanded a chance to review multiple deregulation efforts by Pruitt's EPA on the grounds that the agency did not give proper credence to the scientific evidence when making those decisions. At the top of the list was Pruitt's decision to seek to reassess previous auto emissions standards, which the committee feels was done without sufficient research on environmental and public safety effects.

Pruitt has another trick up his sleeve for reducing the amount of scientific evidence available to the EPA for decision-making: Ban huge swaths of it from even being looked at in the first place.

In April, Pruitt announced, under the guise of transparency, that the EPA would consider a new regulation banning the use of studies whose full underlying data isn't public. That sounds nice on its surface, but scientific experts are outraged, because the real effect would be to prevent the EPA from examining relevant public health information when making decisions.

"For instance, epidemiologists often agree not to release study participants’ addresses or other private, identifying information in order to gain access to their medical data," explained Jeff Tollefson in Nature, noting that regulated industries have objected in the past to the use of anonymized studies on health outcomes in an effort to discredit regulations that may follow.

Ultimately, Pruitt's great white whale is to find some reason for the EPA to stop regulating greenhouse gas emissions. In 2007, in a decision called Massachusetts v. EPA, the Supreme Court ruled that Bush-era foot-dragging on this issue was a direct violation of the Clean Air Act, because the overwhelming scientific information shows that climate change is both real and a threat to human health.

Pruitt has repeatedly suggested in public that he rejects this assessment, suggesting it's a "breach of process" to use scientific evidence gathered by international bodies. He has claimed that nowhere "in the equation has Congress spoken" and that the "legislative branch has not addressed this issue at all," when it comes to regulating greenhouse gases like carbon dioxide.

This is flat-out false. Congress passed the Clean Air Act, a flexible law that specifically indicates that the EPA should be responsive to emerging pollution threats -- which greenhouse gases certainly are -- due to their effect on climate. But this also indicates why Pruitt is doing everything in his power to undermine science. He can't get rid of the Clean Air or Clean Water Acts, nor can he make the court reverse its ruling requiring their enforcement. But he can try to disrupt the use of good scientific evidence in making decisions.

No doubt there's a huge scandal regarding Pruitt's love of first-class travel and his belief that he needs more security than Beyoncé has at a concert. But that kind of corruption is easy to fix, especially if he's replaced in 2021 by a Democratic administration. But the damage Pruitt may do to the EPA's ability to use the best available science for decision-making will be harder to undo, and the damage from his policies to the planet and the people living on it could, in many cases, be irreversible.

City leaders are trying to hold the fossil-fuel industry accountable, since the feds refuse to.