What comes next in Trump's big power-grab: How close is he to staging a coup?

If Trump purges the Justice Department and seizes "emergency" powers, will his fans stand by him? Don't even ask 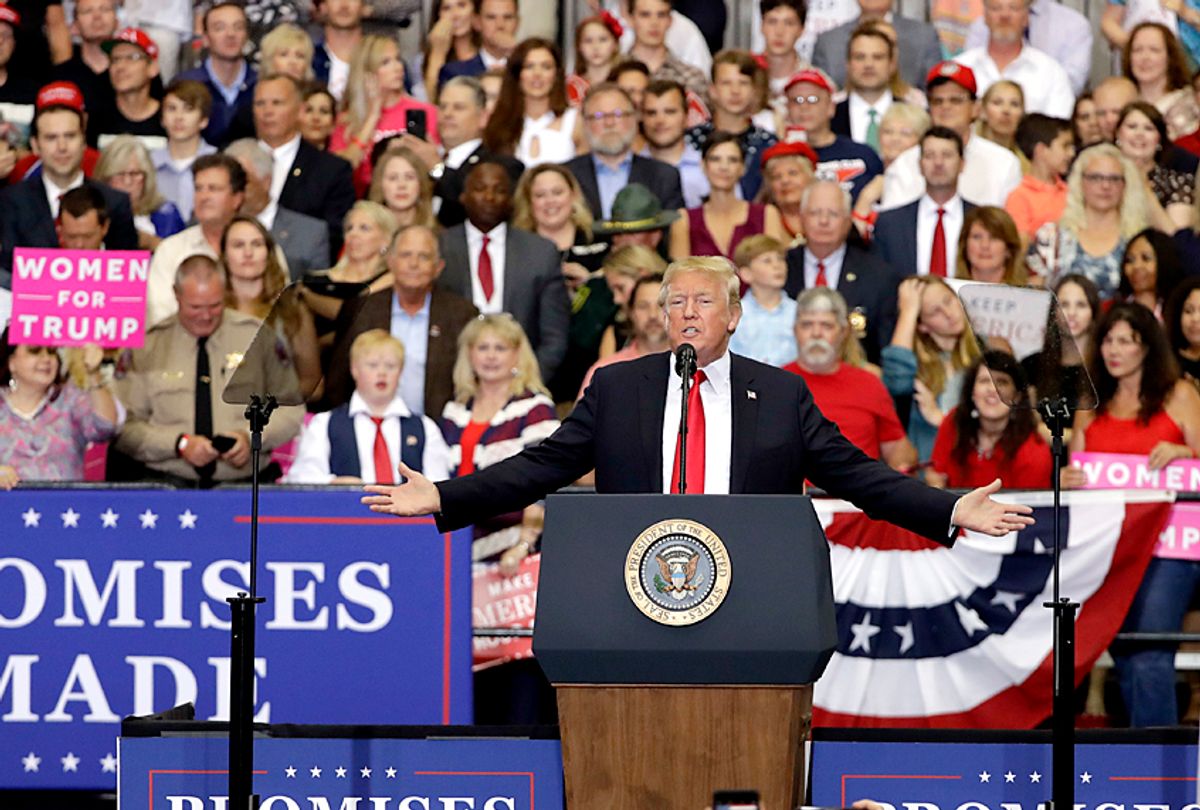 There was a time when Donald Trump’s corruption and Richard Nixon’s corruption were much closer to a one-to-one ratio. Both sets of crimes began as malfeasance aimed at subverting the other party during an election, and both sets of crimes involved power-drunk chief executives doing their best to wiggle out of legal peril -- and only managing to make themselves look guiltier with every ill-conceived gambit.

This comparison flourished a long time ago, in a relative sense. Now matters pertaining to Trump have escalated to a point well beyond Nixon and beyond all available examples of previous presidential corruption. We’ve passed the zero-barrier, a point of no return, sliding recklessly into new territory: a phantom zone of political madness without precedent. Zero visibility. This is the Space Mountain of political eras -- too dark to see what new forms of devilry lurk around the next bend. Hell, we can’t even see the next bend. If you’re already suffering from whiplash, you’re not alone.

To suggest everything will be just fine because bad times have always worked themselves out in America -- that if we just hold our breath and hang tight, justice will be served and the wheels of democracy will keep on spinning as before -- is supremely foolish thinking. Here’s why.

The New York Times on Saturday published a letter signed in March by Trump’s former attorney John Dowd and his longstanding television attorney Jay Sekulow. The lawyers argue, in Trump’s name that: 1) The president can’t be subpoenaed, and 2) the president, if he so chooses, can’t be investigated by the Justice Department.

Put into broader terms, Trump believes he controls the entirety of federal law enforcement and therefore isn’t beholden to it. So he can't obstruct an investigation in which he’s technically both a subject and the chief investigator, per Article II of the Constitution. Likewise, Trump maintains that he can fire anyone serving in the executive branch, including the FBI director or, yes, the Justice Department special counsel currently investigating him. Specifically, the letter states: “[Trump] could, if he wished, terminate the inquiry, or even exercise his power to pardon if he so desired.”

I take the “terminate the inquiry” line to mean Trump is asserting that if the special counsel’s investigation steps over a particular (if unspecified) line, Trump could start firing people, from Attorney General Jeff Sessions on down, certainly including Robert Mueller. But that’s merely a near-term concern.

Let’s not forget that Trump has relentlessly repeated for at least a year now that the Russia investigation is a “witch hunt,” with the not-so-subtle subtext being that the Justice Department, including the FBI, is filled with criminal traitors engaged in a coup d’état against the entire Trump regime. The “deep state” conspiracy theory, it’s called. While those of us on the normal side of the ledger know it’s all nonsense, pro-Trump trolls and loyalists like Kurt Schlichter and Franklin Graham, among many others, believe -- or at least claim to believe -- that the deep state is in the midst of a coup against the president. Worse, it’s not out of bounds to assume that most of Trump’s base, which currently hovers at around 44 percent of American voters, agree with the coup theory. Seventy-four percent of Americans believe the "deep state" controls policy, thanks in part to Trump.

If Trump’s base is firm, then 44 percent of American voters, give or take, might be willing to go along with the president if he retaliates against the (fictitious) coup by clearing house at the DOJ. The base would perceive this as in itself a form of justice being served, when the true goal would be to kill off the Russia investigation and, by extension, the investigation into Trump’s fixer Michael Cohen by federal prosecutors in New York. Furthermore, it’s not utterly unimaginable that Trump could use his commander-in-chief powers to order the arrest of Justice Department officials who, as the White House and Fox News would repeatedly allege, were participants in the coup.

On Sunday, Trump tweeted a quote by former 2008 Hillary Clinton campaign chief Mark Penn in which Penn referred to the Justice Department’s tactics as that of “stormtroopers.” Given the way the investigators are being framed as Nazis and criminals dozens of times every day by Trump and his cult-like disciples, and given how Trump’s lawyers have enumerated his perceived executive powers to include absolute purview over the Justice Department, would anyone be surprised if Trump decided to press forward with firing or perhaps arresting federal law enforcement officials en masse? That would be profoundly dangerous and disturbing, to be sure. But it shouldn’t be surprising, knowing what we know now.

There is no doubt the Red Hats would stand with Trump throughout every despotic move, as they have since the election. It would be a grave mistake to trivialize their loyalty, or assume that at some point they will have had enough and turn on their leader. Notice how, as Trump’s legal jeopardy escalates and instances of his incompetence grow more frequent, his poll numbers seem to magically rise. It turns out H.L. Mencken was right when he said, “No one in this world . . . has ever lost money by underestimating the intelligence of the great masses of the plain people. Nor has anyone ever lost public office thereby.”

Pro-Trump propaganda has been so thick, so pervasive and so effective that millions of Americans will continue to chant “Drain the swamp!” while their leader seizes control over the law itself, granting himself near-total immunity to do and say anything that pops into his head, no matter how dictatorial. Watching Trump’s rallies as well as the ceaseless burlesque shows of fealty to Trump on Fox News, I can only wonder how much cash Trump supporters have wired to Nigerian princes over the years.

Trump's Red Hat loyalists don’t realize that unless their cartoon dictator decides to retain the presidency for life (who or what can stop him, should law enforcement be subjugated beneath him?) there will be other presidents, some of them Democrats, who could sashay right through some of the gaping loopholes created or exploited by Trump’s maneuvers. Not unlike Trump himself, his fans don’t see the long view: There are catastrophically damaging repercussions to Trump's self-interested decisions. If Trump tried to grant himself Putin-like authority, the 44-percenters would insist that he’s simply making America great again. With this degree of popular support, Trump is this close to doing whatever the hell he wants.

The Republican Party, meanwhile, which rose to power after Watergate by taking a long-term, strategic approach to gaining electoral majorities, is guided today by transactional, nearsighted thinking. Trump’s “eternal now” mindset rules the party, to the great detriment of both American democracy and the future of the GOP itself. Indeed, as Trump consolidates his power, congressional Republicans will be rightfully viewed by history as impotent and irresponsible, lapsing into political torpor while the leader of their party seizes broader control over its elected officials and the people.

We’re closer than ever before to a president seizing unparalleled non-wartime authority. Anyone who’s studied the history of such actions throughout human civilization knows that leaders who grab emergency powers in the context of a political crisis (real or alleged) rarely give up those powers when the crisis is over.

Trump, being a political novice, has zero respect for the strictures traditionally placed on the office of the presidency. Nor does he have any respect for how his actions may resonate long into the future, establishing new and perilous latitude for the White House. The most incompetent, most corrupt and most damaging president in history -- a president with zero expertise in constitutional law or political tradition -- believes he has greater powers than all previous chief executives. It’s in writing now, visible in the public domain, and it enjoys the fist-pumping enthusiasm of way too many citizens. This is harrowing.

Four warning signs of an authoritarian

Democracies can collapse without tanks in the street, warn Harvard professors Steven Levitsky and Daniel Ziblatt.