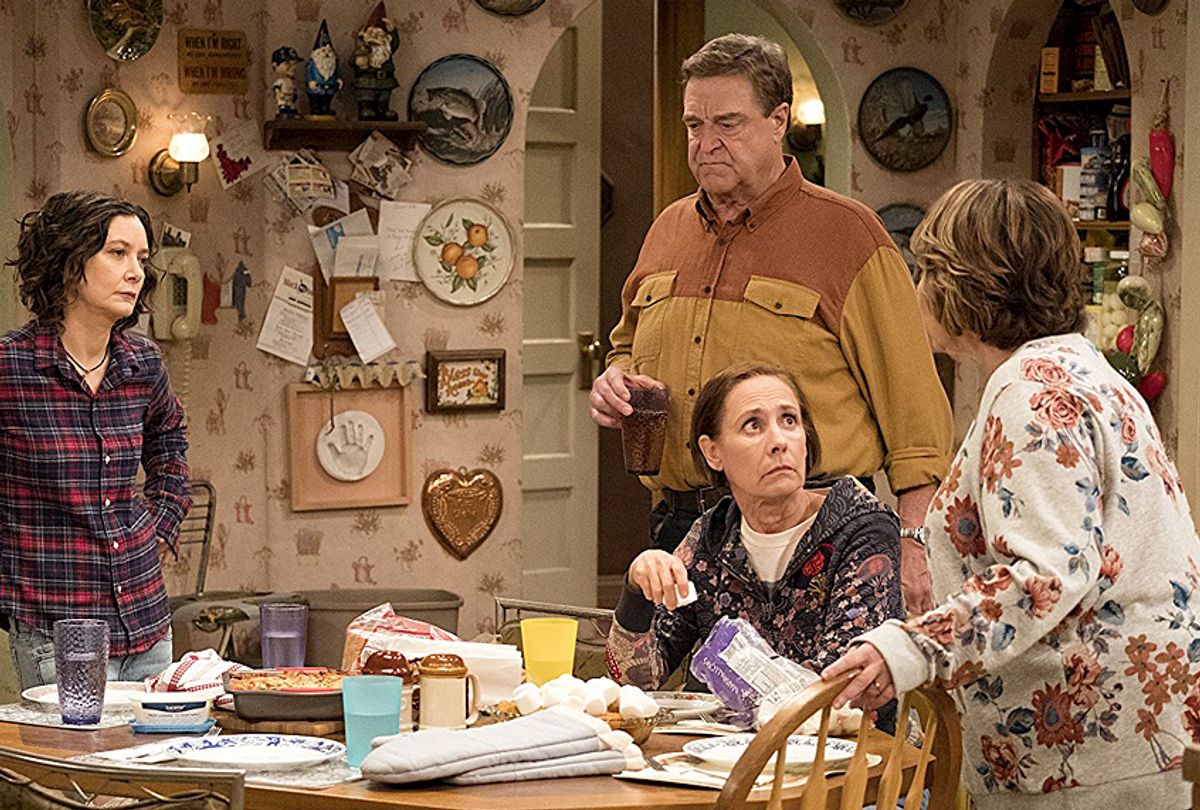 There may be a "Roseanne" spinoff in the works – and an official announcement could arrive this week. According to the Hollywood Reporter, ABC is "knee-deep in conversation with executive producers" for an off-shoot of the series. The news comes less than a week after the network cancelled the '90s revival in the wake of star Roseanne Barr's racist Twitter tirade.

Veteran executive producer Tom Werner, who was behind the original series and the reboot is reportedly "highly engaged in finding a way to continue the franchise with stars Sara Gilbert (who plays Darlene), John Goodman (Dan) and Laurie Metcalf (Jackie)," THR writes. "Sources note that it's likely the entire cast — sans star Roseanne Barr — and creative team, including showrunner Bruce Helford, and the same writing staff and crew would return for whatever the new incarnation is. Multiple ideas are being discussed, including one focused on Darlene, as Gilbert was the driving force behind the ABC revival."

"Roseanne" returned to TV in March after two decades of being off the air. The show enjoyed a wide viewership, praise from President Donald Trump and tons of buzz — both positive and negative — for depicting a working-class family, including a character who, just as in real life, is a Trump supporter.

Hours after Roseanne Barr tweeted that Valerie Jarrett, a senior adviser to former President Barack Obama was the combination of "muslim brotherhood & planet of the apes," ABC announced the show's cancellation. Barr deleted the tweet and even went so far as to blame her racist comments on the sleep medication Ambien. In a statement, ABC’s entertainment president, Channing Dungey, said, "Roseanne’s Twitter statement is abhorrent, repugnant and inconsistent with our values."

Barr's ex-husband, Tom Arnold agreed with the network. He said that the star is "obviously" a racist during an interview with "Good Morning Britain" Monday, adding that Barr needs to "get off Twitter."

"I have to say, I saw it coming. I warned everybody," Arnold said, who was married to Barr for four turbulent years. Arnold was a writer and actor on the original "Roseanne," but was fired by Barr in 1994 – the same year the couple divorced.

Other cast members have been speaking out in the past week as well, clearly stunned by the news, even though Barr's tweet was not unprecedented. "A lot of people have been hurt by this," co-star Sara Gilbert said on "The Talk" Monday. "I will say I’m proud of the show we made. This show has always been about diversity, love and inclusion. And it’s sad to see it end in this way. I’m sad for the people who lost their jobs in the process. However, I do stand behind the decision ABC made."

Viacom also pulled reruns of "Roseanne" from three of its channels; so did Hulu and Laff digital. ICM Partners, Barr's talent agency, dropped her as a client.

The Season 10 comeback was complete before the controversy, but the show was expected to return in the fall for 13 more episodes. But now, "ABC scheduled a meeting with producers to discuss potential ways to continue the show," according to THR. "Those talks are said to have heated up over the weekend, with Werner highly engaged in finding a way to keep the series going."

ABC reportedly wants to expunge Barr and her financial involvement from any new incarnation from the show, but "The series was created by Matt Williams and is based upon a character created by Barr," THR reports. "That could make an offshoot a thorny debate as it's unclear if just the character of Roseanne Conner falls under Barr's oversight."

Compensation for the other actors on the show, as well as the showrunners and other staff members is up in the air for the now-scraped upcoming season. And it seems ABC is both concerned with the now-unemployed staff and with their fall lineup, which is missing "Roseanne" and will also not have a new season of "Grey's Anatomy."

"Much has been said and written about yesterday’s decision to cancel the Roseanne show," Ben Sherwood, Disney-ABC TV Group chief, wrote in an email to the show's staff at the time. "Not enough, however, has been said about the many men and women who poured their hearts and lives into the show and were just getting started on next season."