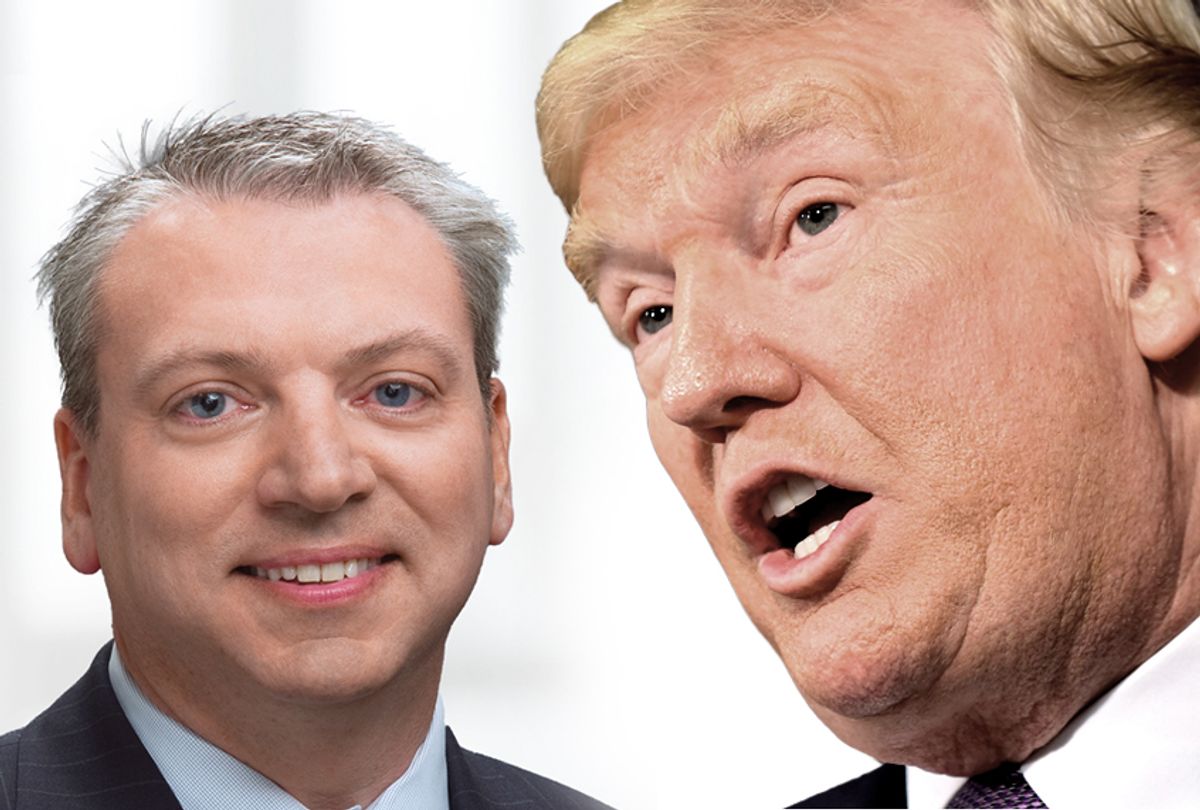 David Porter, Donald Trump's nominee to sit on the Third Circuit Court of Appeals -- which covers Pennsylvania, New Jersey and Delaware -- wants people to believe he possesses a impartial, sober-minded judicial worldview that respects precedent and the right of Congress to pass human rights legislation. During his hearing in front of the Senate Judiciary Committee on Wednesday morning, Porter spent much of his time distancing himself from his far-right associations and his past writings that demonstrate a rejection of government's right to ensure health care access or to protect workers, LGBT people and women from violence and oppression.

“Judges don’t have a position," Porter said at one point. "They’re not advocating for anything. Their job is to follow the law wherever it leads.”

Repeatedly, Porter, a lawyer from Pennsylvania with extensive ties to the hardline Christian right, assured the committee, under pointed questioning, that despite his voluminous writings suggesting otherwise, he was a great fan of "binding precedent" and would not seek to undermine major court cases he had previously and repeatedly attacked, such as those that secured abortion rights or protected the Affordable Care Act.

Civil rights groups are skeptical of Porter's claims to be a fair-minded jurist.

"If you look at President Trump’s judicial nominees," Mike Zubrensky, chief counsel for the Leadership Conference on Civil and Human Rights, told Salon, many of them "made the same types of assurances that David Porter did and then ruled in very conservative, ideological ways once they got to the bench."

Dan Goldberg, legal director of Alliance for Justice, agreed that this is a common strategy for Trump's judicial nominees.

“One of their tactics is to try to pull one over on the Senate and the American people, try to hide from everything they’ve ever written or said or believed, and try to give the false impression that all of a sudden, when they put on a robe, they become a completely different person," he explained. "The reality is that these people are being nominated precisely because the Trump administration, the Federalist Society and far-right folks know exactly who they are. They know what they will do to roll back critical rights for the next 30 or 40 years.”

Porter, who spent much of the Wednesday hearing stammering and looking nervous, has an extensive history to run away from. In 2012, he wrote an article for the Center for Vision & Values in which he decried what he clearly saw an overuse of congressional powers through the constitution's commerce clause, which gives the federal government power over interstate commerce. He cast a dim light on the courts for upholding "far-reaching New Deal laws," specifically singling out the National Labor Relations Act, which protects the right of workers to unionize, as an example of what he clearly intended audiences to see as governmental overreach.

In the same piece, Porter sneered at the Obama administration's arguments asserting that all people will need to access doctors and health care at some point in their lives, calling the assertion a "metaphysical abstraction" that would "break the Framers’ structural design that for 225 years has preserved individual liberty."

When asked about this, as well as his documented hostility to LGBT rights, Porter demurred, painting his previous writings as thought experiments rather than clear indicators of his behavior on the federal bench.

To be clear, the lack of liberty to comment on one's opinions and principles is not a legal restriction. It might better be described as a self-imposed restriction designed to deflect questions aimed at figuring out how a nominee intends to conduct himself as a judge.

In its letter to the judiciary committee opposing Porter's nomination, the Leadership Conference noted that Porter was "co-founder of an organization – the Pennsylvania Judicial Network – that formed in 2009 to oppose the nomination of Sonia Sotomayor to the Supreme Court."

During his confirmation hearing, Porter aggressively denied this claim, portraying his association with the group as merely a 15-second phone conversation and suggesting that he could not explain how his name wound up at the top of a letter announcing his role in founding the organization. The link provided by the Leadership Conference to document Porter's association now leads to an error message at the Judicial Crisis Network that informs visitors, "The page you are looking for no longer exists." A Google search makes clear that the page did, at one time, exist.

In fact, a copy of the press release is still up at a site called PA Town Hall, and it lists Porter as one of the "initial coalition members" of the Pennsylvania Judicial Network.

“He ran away from his record because he’s embarrassed by it," Zubrensky said in response.

As he has done with many other Trump judicial nominees, Sen. Richard Blumenthal, D-Conn., asked Porter whether he felt that Roe v. Wade and Brown v. Board of Education -- the Supreme Court decisions that legalized abortion and ended school segregation, respectively -- had been correctly decided. Porter repeatedly dodged the question, saying that he considered them "binding precedent" but wouldn't express his personal views on the merits of those cases. Blumenthal kept pressing the point until Porter finally cracked and tried to explain why he was demurring.

"I could give you an answer to that question, but there are reasons why I and other nominees don’t," he said, aligning himself with other Trump nominees, such as Wendy Vitter, who have similarly evaded on the issue of whether they agree with the legal reasoning that led to school desegregation. "We don’t want to appear to be giving an answer that would please you in order to obtain a vote."

Dan Goldberg of Alliance for Justice pointed to Trump's Supreme Court pick, Neil Gorsuch, as evidence as to why it's dangerous to rate a judicial nominee based on their answers before a congressional hearing rather than their history. During Gorsuch's confirmation hearing, he downplayed the importance of his track record of ruling against worker's rights, even in an infamous case where Gorsuch ruled against a man who was fired for refusing to freeze to death in his truck. But one of Gorsuch's first decisions as a Supreme Court justice, in which he granted the right of employers to steal wages from workers, fit more with his history than with his promise to hold no ill will towards labor in his confirmation hearing.

Porter is, like many other Trump nominees, being crammed through as quickly as possible and without any regard to Senate tradition. Sen. Bob Casey, D-Pa., refused to submit a "blue slip" for Porter or introduce him at the hearing, saying, "Porter has advocated legal theories that stack the deck against workers, deny Pennsylvanians access to health care and undermine the equal protection of our laws for all Americans." Traditionally, this refusal to participate from a home-state senator would be considered a valid reason to withdraw the nomination, but Judiciary Committee chair Sen. Chuck Grassley, R-Iowa, decided to upend tradition to get Porter onto the court.

Senate Majority Leader Mitch McConnell is so adamant about stacking the courts with Trump nominees that he has now cancelled the Senate's traditional August recess in order to push through more nominees before the fall elections that might slow down the rubber-stamping. Porter is just one of many nominees that Trump, along with Grassley and McConnell, is using to remake the federal judiciary into an authoritarian institution with little regard for human rights. Unfortunately, Porter sailed through Wednesday's confirmation hearing by acting as if he had only the vaguest recollection of his past beliefs and will likely continue to play that game until he's seated on the Third Circuit Court.