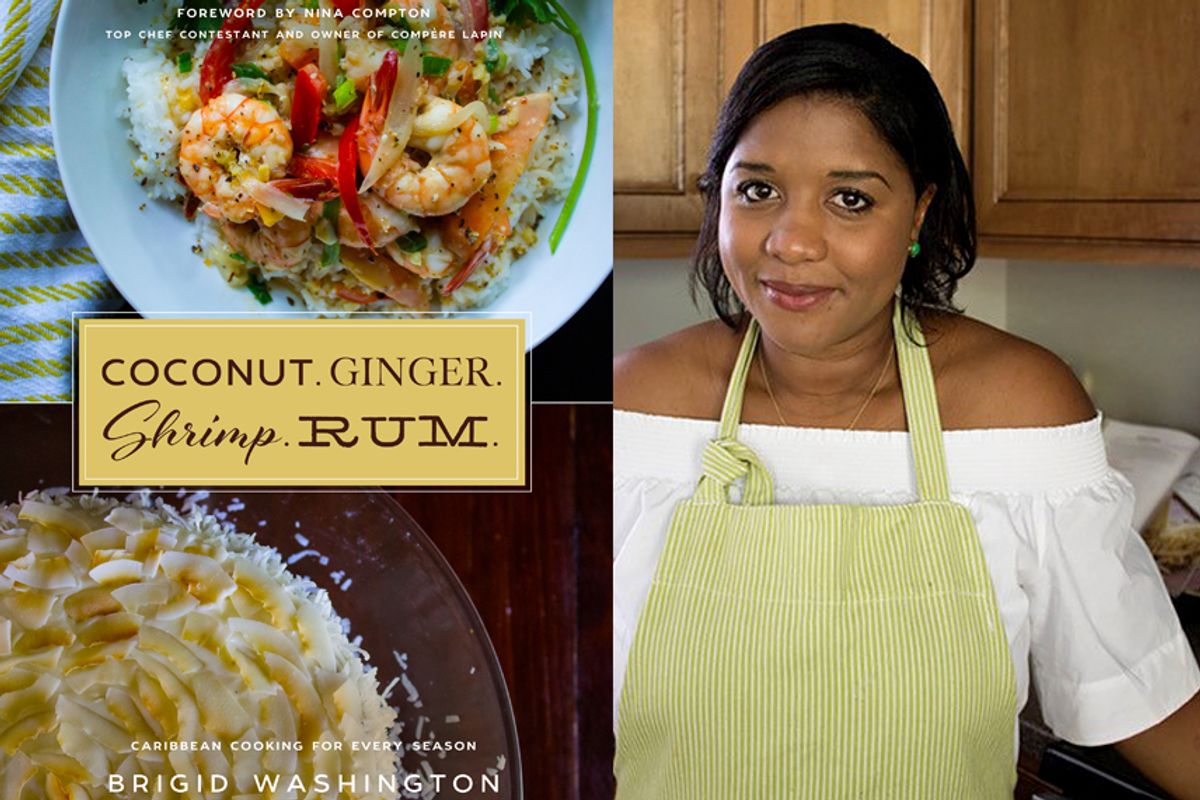 Born and raised in Trinidad and Tobago, Brigid Washington has created truly innovative, mouthwatering recipes so you can bring the flavor of the islands home. The recipes in "Coconut. Ginger. Shrimp. Rum." highlight seasonal bounties and four major ingredients that are integral to Caribbean cuisine and culture. Through a chapter for each season, Brigid focuses on simple, fundamental ingredients, and lots of fresh, farm-stand produce that will guide and delight any cook through the year.

In writing this book, it became apparent that the greatest tragedy of Caribbean cuisine is misconception. Too often the food of the islands is translated to American restaurant tables as simple, fruit-forward fare; these tourist-friendly dishes portray a shallow concept of the West Indies’ rich and enduring culinary history. The narrative of the Caribbean is best told through the unfurled flags of the countries that once colonized the region. The settlers from those countries—both indigenous and conquistadors—translated their cui­sines into a tradition, honing in on the wonts of their past whilst simultaneously bucking them to befit their new locale.

What happened next was probable. The island nations cultivated their distinct social norms and cash crops in ways that still strongly demark the socio-economic and cul­tural identity of each isle. The ill-fated identity of slavery and the burns of sugar were bonds of historical proportions. And even though time and technology have advanced the Caribbean agenda—far beyond tourism—each island remains forever fused to the others, largely by traditions of a bygone era. But there remains a special brand of magic found in the islands—its people, and especially its food.

For you, I have written this book to be an approachable, buttoned-down way to incorpo­rate an often misrepresented yet vibrant cuisine with the seasonal fare you already adore. The mezze, Roasted Cauliflower Coconut Tabbouleh, for instance, is equal parts delight and discovery. This recipe traces a path to the Mideast, making the Cauliflower the star ingredient and without the use of fussy, far-flung ingredients.

In writing this book, I watched how old memories and recipes came to life beneath my fingers, connecting my past as a child and teenager in Trinidad & Tobago to my present life as a wife and mother of two in Raleigh, North Carolina. If nothing else, this project is a work of syncretism, integrating two worlds, through four ingredients. Within these pages, my goal is to elevate and celebrate the bounty of each American season in a way that salutes the taste of the tropics. And doing so requires a triage of, in my opinion, the most essential West Indian ingredients: coconuts, ginger, shrimp, and rum.

Early on, I realized my culinary curiosity was linked to my upbringing in Trinidad and Tobago. As a child, my mother taught me about the wonder of diversity; one that is an inextricable part of the country to which I belonged. I saw how salient the food-ways of Africans, East Indians, Spanish, Chinese, French, Syrians, Portuguese and Germans coalesced and gently infiltrated our day-to-day lives. Our dinners were edible geography; from East Indian dahlpuri roti to West African yams. And that was the norm throughout Trinidad & Tobago and throughout the Caribbean. Island folk ate in a way that honored the cultures that formed the region and also in a way that complemented the ebb and flow of their physical environment. It was this intuitive relationship with food and how it shapes my sense of place that drove me to pursue it purely and professionally.

My time at the Culinary Institute of America formalized my rough understanding of food as it pertains to the cultures of yesteryear and the economies of today. It was in the dignified kitchens of the Hyde Park campus where I learned the scope – as well as tedium and toil – that is the business of food. Quick, accurate knife-cuts and rote recollection of cooking ratios boosted my muscle memory in ways I never thought possible. I became a disciplined cook, simply because it was expected of me. And surprisingly enough, I enjoyed the romance of the routine. By way of being Editor in Chief of CIA’s monthly publication, I reported on the shape-shifting nature of the industry, interviewing some of its most formidable gatekeepers. At that time, I didn’t know these encounters would lead me to this project. I knew with certainty that my experiences would eventually lead me home, but I didn’t know it would be via a cookbook, where I would write the story of home.

From my first taste of from-the-nut coconut water as a toddler in South Trinidad to writing this book, all of my experiences have been part of a powerful education. This knowledge of the salience of community, the rhythm of the seasons, and the indomitable healing nature of simple ingredients, will forever form the core my approach to food and life. Because, I wasn’t just raised in the Caribbean—but rather, the Caribbean raised me.

I hope you enjoy this recipe and a taste of the islands, from my heart to your kitchen. 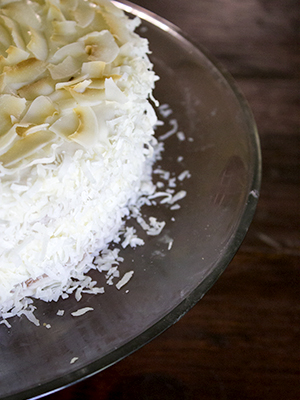 This deceptively straightforward darling confection of the American South will make a master-baker out of many reluctant home cooks. The use of some ingenious tricks camouflages any faux-pas, producing a cake that looks (almost) as good as it tastes.

Rind of a small orange

Prepare the cake: Preheat oven to 350. Outfit your cake pans first with a generous spread of butter, following with parchment paper then butter again, and finishing with slight dusting of flour. In an electric mixer fitted with the paddle attachment, cream together the butter and granulated sugar for 5–7 minutes on high speed until it is airy and pale yellow. Following this, lower the speed to a slow-medium and add the room temperature eggs one at a time. Then add the orange rind. The mixture will look a bit curdled. Fret not. Add the vanilla and almond extracts. In a separate bowl combine the cake flour, baking powder, baking soda, and salt. Ready your coconut milk. Working in batches, add the flour to the mixing bowl, then a bit of the coconut milk. Continue this alternating process, always starting and ending with the flour mixture and scraping the bowl in between with a rubber spatula. Mix for another 2–3 minutes. Remove the rind. Pour into prepared cake pans and bake for 35 minutes. Gingerly remove from cake pans and allow to cool on a wire rack.

For the icing: In the bowl of an electric mixer fitted with the paddle attachment, combine the cream cheese, butter, coconut milk, and vanilla extract on low speed. Add the confectioners’ sugar and mix until very smooth.

To assemble: On a cake stand, take one layer, top side down and smear with icing. Place the second layer atop, and frost the top as well as the sides. Use a spatula to frost the cake as evenly and smoothly as possible. Take the shredded coconut and lightly press onto the sides of the cake and decorate the top of the cake with the toasted coconut flakes. Serve room temperature with a glass of for-no-reason-at-all champagne.