Will “Fallout: 76” pay homage to the Appalachian region’s unique history and traditions without stereotyping? 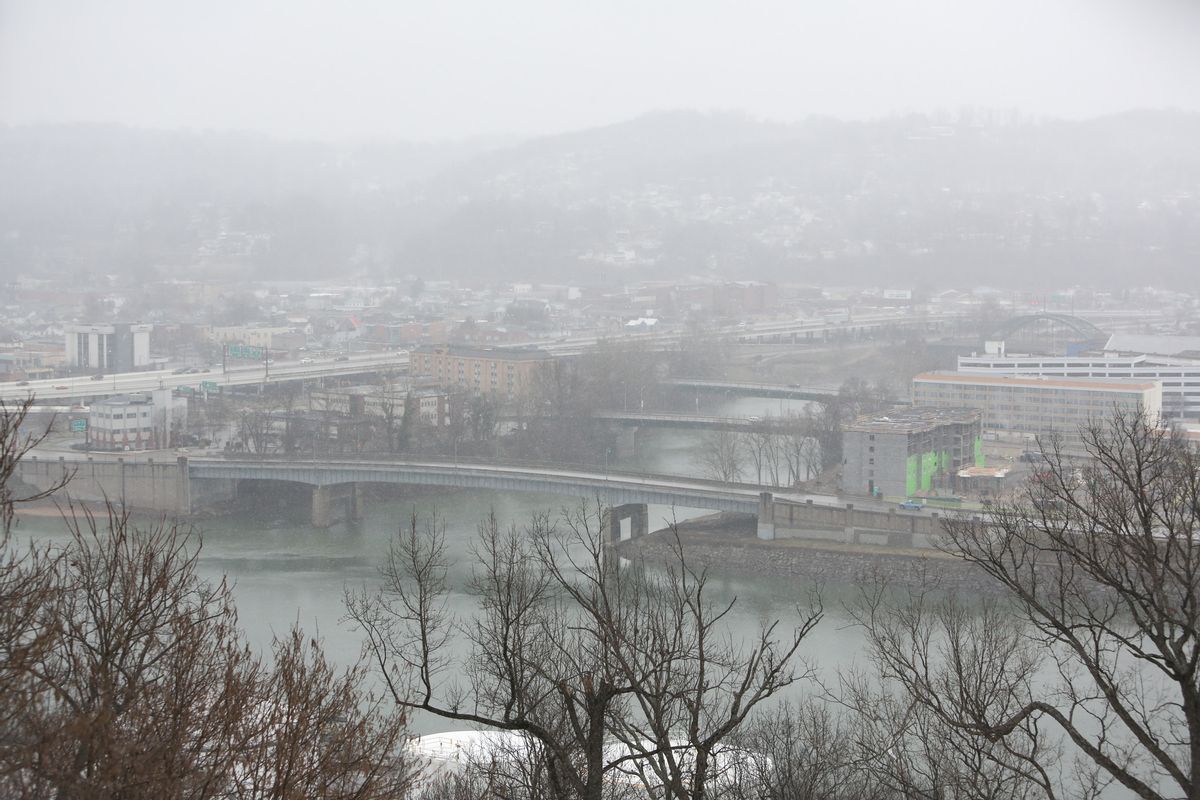 Snow falls over the confluence of the Elk and Kanawha Rivers, Sunday, March 16, 2014, in Charleston, W.Va. (Marcus Constantino)
--

Video games are often not great at depicting rural life. But all signs indicate that the next game in the “Fallout” series, “Fallout: 76,” is going to be set somewhere in the mountains of West Virginia — for better or worse. The news has been met with a range of responses, from celebratory to cautionary, but either way the short trailer released last week serves as a conscious choice on the part of the game’s developer Bethesda to diverge from expectations that their next big release would continue their popular “Elder Scrolls” series.

Information found in earlier “Fallout” games referring to a “Vault 76” located somewhere in Virginia, as well as a certain iconic West Virginian song making its way into the recent teaser, make it pretty clear that Bethesda is eyeing the Mountain State as the setting for the next big iteration of its best-selling game series.

But while the “Fallout” video game series has never properly given the Appalachian region its unique retrofuturist/post-apocalyptic treatment, the game series’ history of portraying rural areas proves that it might not handle its own vision of West Virginia in a way that’s responsible to the state’s real-life residents.

The “Fallout” series has always been about loss and its implications. The word “fallout” itself has multiple meanings as far as the game’s themes are concerned. Nuclear fallout from a brief but devastating world war results in the physical state of the game’s world (once a gleaming sci-fi utopia, now a decimated landscape dominated by twisting metal and debris), but there’s an altogether different sort of fallout visible in the disastrous condition of so many of that same world’s civilizations and people — namely, that they’ve regressed to a point where killing or attacking strangers has become part of the new post-apocalyptic way of life.

A hefty percentage of the folks who players encounter in the game will either immediately try to kill them or else will ask them to complete some kind of quest on their behalf (at the end of which they may also try to kill the player). But most of them are just trying to survive in any way they can. They’re fighting every day with whatever vaguely weapon-shaped implements they have on hand in order to hold on to what little land they have left. The people of the “Fallout” series’ world are deeply connected to and shaped by their local landscapes, forgotten or ignored by whatever remains of the government, wary of outsiders, and fiercely loyal to whoever (or in some cases, WHATever) they’ve chosen to call their family.

Those images might start to sound pretty familiar to many Southerners, particularly those who have lived or grown up in the Appalachian Mountains. But those hoping that their rural experiences will be responsibly represented in the newest “Fallout” iteration have reason to worry; for an explanation, look no further than “Fallout 3” (the first major game in the series with current developer Bethesda at the helm) and its downloadable content “Point Lookout.”

Instead, the area looks like something out of the movie “Deliverance.”

Deranged “swampfolk” roam the land, killing anyone without “the marks” (disfiguring mutations) and worshipping eldritch gods through blood sacrifices and worse. It’s later explained in-game that the swampfolks’ appearances are the result of intense nuclear radiation as well as (naturally) generations of inbreeding. Much like the horror film “Wrong Turn”, the game trades in on its audience’s preconceived notions of rural residents in order to instill fear and create a feeling of otherness or strangeness in its players. Everything about these enemies is designed to call to mind the “dangerous hillbilly” stereotype, from their threadbare overalls to their broken shouts of “There you is!” when they spot the player character roaming their lands.

These characters are not human, a fact that the game telegraphs to the player in various ways (some more subtle than others). The swampfolk are implied to be capable of trade and interact offscreen with certain non-player characters. Despite this, there is only one true swampfolk character players can interact with directly, and it’s a young boy who has specifically been outcast from the swampfolks’ society due to lacking their distinguishing disfigurements. The way to know in-game who is a friend and who’s a foe starts to become a question of simply who looks the most traditionally “human.”

One of the few humans tolerated by the swampfolk is a local moonshiner, because of course the swampfolk love moonshine. They use scavenged teddy bears, bizarre idols and wood carvings to mark the boundaries of their territory, and occasionally dead swampfolk can be found carrying around human flesh in their pockets. Even the game’s official downloadable editor lists the swampfolk as “creatures” rather than human enemies, despite their ability to speak, obvious culture, and mostly-human appearances. Consistently, the gameplay and story of “Point Lookout” work in tandem to “other” the swampfolk through stereotypical redneck characteristics, only to follow up this othering by dehumanizing them so the player won’t feel bad later about killing dozens and dozens of them over the course of the DLC.

Again, none of this is surprising on its own, given how important it is in a video game to develop a visual language to signal to players who and what their enemies are. But Bethesda’s use of harmful rural stereotypes as a shorthand for “enemy” reinforces these stereotypes within American culture at large, and its dehumanization of the characters that embody these stereotypes can’t help but also dehumanize people in the real world with the same characteristics.

It’s possible, even given this track record, that “Fallout: 76” will pay homage to the Appalachian region’s unique history and traditions without stereotyping and minimizing the culture it depicts, and many in the game industry are hopeful that it will . And to be fair, we’ll all have to wait until Bethesda’s E3 conference on June 10 to know for sure that the game is even set in West Virginia in the first place.

But Bethesda’s past missteps have made it unclear whether or not the company values making the kind of effort required to portray rural working class people with any kind of dignity. And if other recent big budget games like “Far Cry 5” are anything to go by, mass-appeal games still have a long way to go before they’re able to evoke rural themes and imagery without completely flattening or misrepresenting the very folks they’re working so hard to call to mind.