Chasing Anthony Bourdain's "perfect little things": Kitchen work and what I hungered for

I spent my 20s in restaurants. There was no room for my depression in this work, I thought 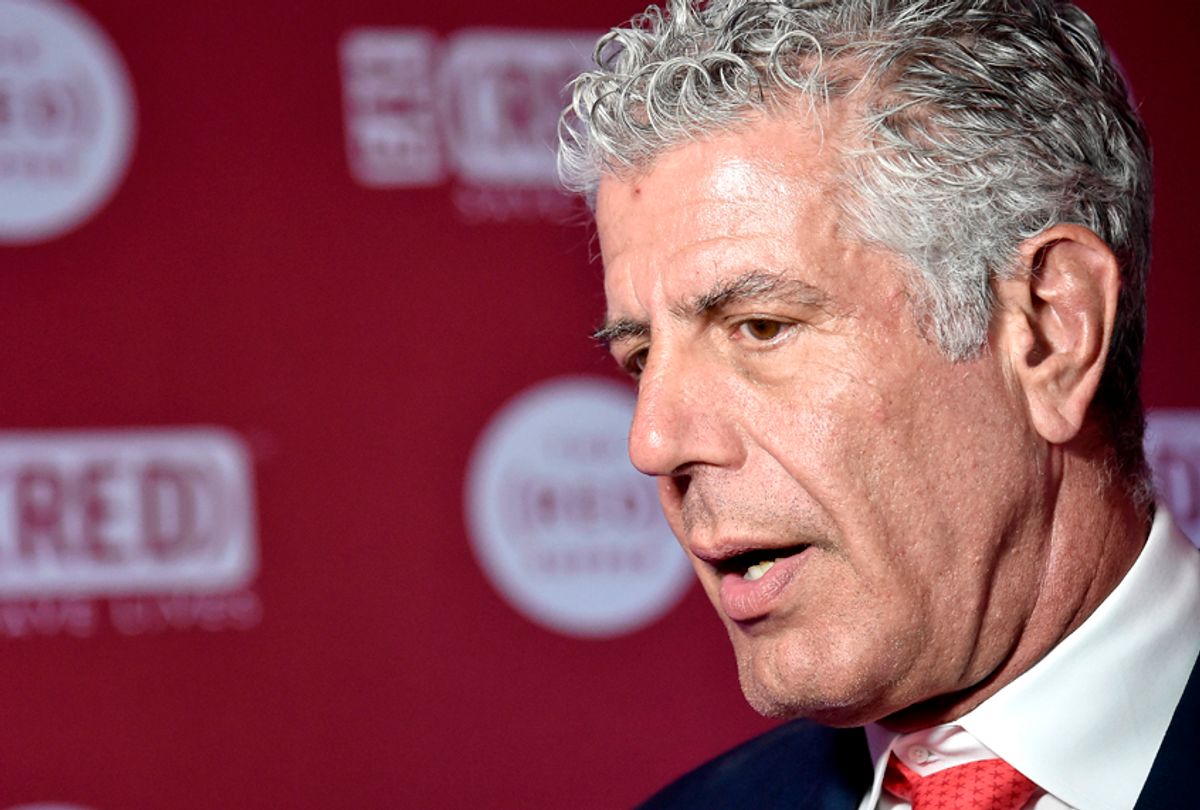 I melted a knob of butter, and, when the fat was liquid and gold, I cracked black peppercorns — they glistened in the milk solids, sizzled and bloomed. On the next burner, a pot of water rose to a boil: I salted it, stirred in spaghetti, and stole a few ladles to join the butter and pepper. The mixture clouded; I wasn't worried. I was making cacio e pepe for dinner precisely because I needed a reprieve from worry. It's five ingredients — pasta, pepper, pecorino, butter, water — a dish of few frills, the flourish its inarguable simplicity. In Anthony Bourdain's words: "A perfect little thing."

Revealing and reveling in those "perfect little things" was Bourdain's forte. A maitre d' of the globe as much as a chef, he built an empire out of his comportment, a charismatic freewheeler who'd cut his teeth in New York kitchens. He knew his Mother Sauces as well as the guy who knew a guy who'd get you a seat with the locals.

Like many food-lovers, I revered his persona second, his palate first. I discovered him at the end of my own culinary career, prepping hors d'oeuvres in a banquet kitchen. The last chef I worked under knew I was a writer, and between stuffing mushroom caps and plating airline chicken for rehearsal dinners and bat mitzvahs, we talked books. The chef's taste ran male, vagabond-ish: Cormac McCarthy, Paul Auster and, of course, Anthony Bourdain.

Ping-ponging between poetry and plating, running on the fumes of chronic depression that meant I subsisted on green juice and sadness, I admired what those writers revered, be it baseball or bánh mì. Bourdain's empire was synonymous with a reverence for edible culture, a respect for indulgence not ostentatious but inevitable: beer in an alley, fritters in Little Guatemala. He was an eating, drinking reminder that hungry can mean curious, all around the world.

"We are all what we pretend to be," Kurt Vonnegut writes in "Mother Night," and when "No Reservations" takes Bourdain to Rome he pretends to be a suave star of '60s Italian cinema. Shot in black-and-white, he Dolce Vitas before the Trevi Fountain, cavorts with a clown in Fellini homage. "What bleak meaningless existences we have without this," he muses, and that's before he's twirled his tagliarini, his cacio e pepe, served in a Parmesan bowl.

Perhaps it's that awe, coupled with his sense of curiosity, that makes Bourdain's death by suicide, and perhaps the reveal of his depression, so devastating. Here was a man whose appreciation for the "perfect little things" led him to ask: "In order to enjoy this plate of food, what would I be willing to sacrifice from my past?" (His first sexual encounter and "The Catcher and the Rye" make the chopping block.)

Bourdain epitomized the 21st century update on Aristotle's eudaimonia: the good life, one of pleasure and productivity. To the public's eye, he ate well, traveled dauntlessly, explored with vim and curiosity. Perhaps "Kitchen Confidential" alone would have cemented his reputation, but as his recent guide to Guatemalan food in Los Angeles, reporter Carolina Miranda, notes, "Bourdain wasn't simply a food writer. He was a broad-minded, intellectually curious cultural critic."

He was, like fashion designer Kate Spade, who preceded him in death by suicide as well last week, a figurehead for an industry, the paragon of creative success. Though both Spade and Bourdain leave behind manifold legacies, each made simplicity a hallmark. "The simple perfect dish" or Kate Spade's iconic Sam bags: an achievement, a solution, and inadvertently, a ruse. Is cacio e pepe an answer to existential or psychological yearnings? Can one bag really go with everything?

I spent my twenties in restaurants, hungry for a sense of purpose that my early go at becoming a writer couldn't quell. The pastry station seemed so much more welcoming than the writer's desk. There were other people, for starters, and there was a hierarchy. (I was stage, pastry cook, pastry assistant, pastry chef.) The station had its drawers and checklists: there were sorbets to spin and sables to bake off, pears to poach and oranges to carve into supremes. There was no room for my depression in this work, I thought, even if I found myself sobbing in bathrooms or getting dizzy from hunger or ruminating as I plucked the tiniest, most garnish-worthy mint sprigs.

I wanted to be like I perceived Bourdain to be: adventurous in my abandon. Even at its most wearisome, I told myself the weight of the work was pleasing, like the rounded heel of a sourdough boule, and if I worked enough, I believed, I might become impervious to despair. The cracks in my sense of self-worth and sense of meaning could, like a tart crust, be patched.

And at times, the kitchen did let me be busier than sadness, but the same hunger that once drove me there forced me to clock out for good. How could one be a writer and work twelve-hour shifts, five days straight? (Bourdain, all the more impressive.) How quickly I transferred the logic of recipes, like the ratio for Italian meringue buttercream: combine three part focus with two parts elbow-grease and a dash of grit, and depression could be beat.

Whenever there is news of a death like this, grief pours out and tributes amass and, collectively, we flinch. And maybe that's what my reaction to Bourdain's death amounts to: one woman's shudder in the massive cultural flinch. It's a flinch that happens whenever I remember my own suicide attempts. Even more than a decade in the past, I still recoil, as though I'm witnessing a car wrap around a lamp pole. How many of us will experience the immense success of the Bourdains and Spades of the world? And if success or gustation or family is not enough to avoid the traps of existential despair, what is?

If my agent sold my next novel for seven figures, I'd still have burn marks on my arms from tangoing with sheet pans. "I suspect that many people wanted to be him, just as many wanted to be Spade," Frank Bruni wrote in a tribute. What being someone — even ourselves — means is routinely being accompanied by the surprise dinner guest of one demon or another: trauma, addiction, mental illness.

My therapist often uses this metaphor: setting a place at the table for depression. He tells me to give depression crayons and a placemat to color on. That if depression is a guest in my house, he needs to behave. Perhaps he's right. Or perhaps that uninvited dinner guest needs all the cacio e pepe I can muster. Because, as Bourdain deems it, it's "the simplest nicest thing in the world." The undercooked pasta grown toothsome in buttery broth; that liberal raining of Pecorino Romano, the salinity of the cheese brightening the low smoke of the pepper; and then the whole amalgamate gluing to the noodles. Such pleasing stickiness.

Five ingredients, 20 minutes. For a brief shining moment, or a few forkfuls: This is enough. Here is all you need.

If you or someone you know needs help, please call the National Suicide Prevention Lifeline at 1-800-273-TALK (8255) or contact the Crisis Text Line by texting TALK to 741741.