Is the lobster boom doomed to bust?

Is global warming driving lobster off the coast of Maine and North to Canada, crushing Maine's booming fishery? 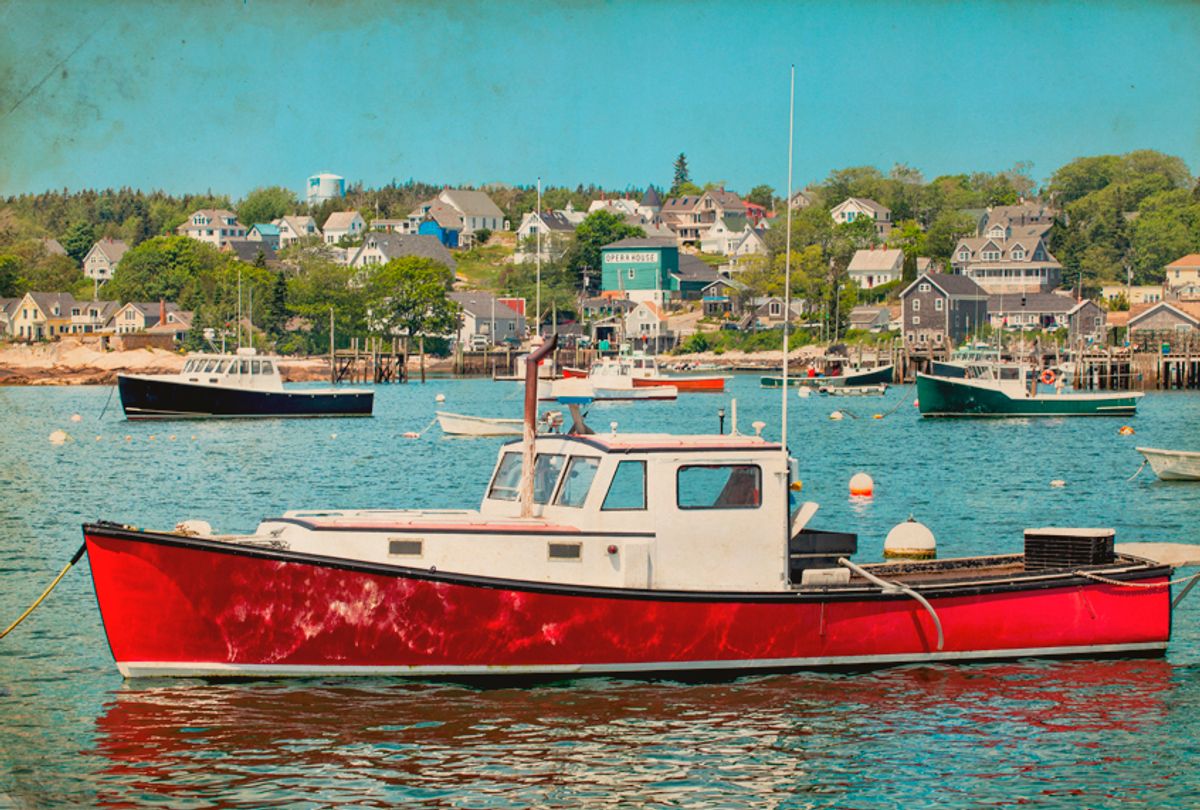 At three in the afternoon on Labor Day, the fog has not budged. Men are fishing blind. If the holiday is not going to keep them in port, then a little mist will not tie them up, either. The fog hovers like a bale of cotton suspended in midair, beginning three feet above the green water and reaching to the top of the radio antennae of the lobster boats. Above this white mass is blue sky. From my stance on the town wharf, my outstretched hands are lost in the void, but, to a toddler, my feet would appear clearly below the floor of the mist. Even at the edge of the basin, the fog has opened up at my boots and above my cap. It bunches in the middle.

My eyes strain into the mist, searching, trying to catch up with my ears, which have picked up a clue of boat traffic coming this way.

Out of the white bank emerges a red trawler, its nets stowed in the stern, its bow headed for me on the wharf. A trawler is a motor vessel that hauls weighted nets behind her. Stepping beside me now on the pine boards is Ed James, a lobster captain I met the year before. He used to catch finfish. Groundfish, like cod and pollock, were his domain—now all but gone. But that was years ago. He was a big fish killer, they say, which is a compliment. We shake hands. Ed, a small angular man, points to the red trawler, now coming alongside the wharf. “Here’s one of the last of the bottom trawlers,” he says. “A century’s worth, she’s at the end of the line.”

I nod at Ed just as the trawler swings her stern toward the wharf. Except for the folded nets, the decks are empty—no cod or other groundfish for sale. I notice the boat’s name on the transom: Ketch’s Catch Can.

Ed and I handle the lines, already bearing bowlines, and secure the boat to the pilings. Captain Ketch cinches them tight. He is a barrel- chested man, a little top-heavy. He seems to be a cantankerous fellow who is angry at the fog for some reason. Yet witty.

“You don’t have any laces in your boots,” says Ed.

Like any unemployed fisherman, Ketch has a lot on his mind and lays out his latest argument to Ed with intricate design—many strands braided together into a strong line, a pleated rope.

“They shut us down on Thursday,” Ketch says.

“I heard,” says Ed. “The cod closure is statewide. Only one-fourth of the grounds are open.”

“Not where I fish. All my secret spots are west of here—all closed. They’ve put a hurt on me.”

“The problem isn’t overfishing. The state has cut off the cod’s food by damming the rivers.”

“If we can’t have cod, at least we have haddock. The state has doubled the haddock quota to one point three million pounds.”

I do some quick arithmetic in my head and realize the haddock boom will not make up for the cod bust. Groundfishermen will have a hard go this year. More will turn to lobstering, putting increased pressure on a single resource. In the Gulf of Maine, the population of cod of reproductive age has hit an all-time low—only 3 to 4 percent of what’s required for a sustainable fishery, according to scientists. Cod will likely be a long time coming back.

Ed sits on a low pier piling. That’s seniority. “Some—flatlanders mostly—have the idea that cod are wicked predators of lobster,” he says. “So, to them, with cod disappearing, lobster is coming back.”

“Oh, I know it. In the winter, when cod and lobster are both hunkered down in the deep and it’s darker than the inside of yer pocket, all them cod can eat is baby lobster and other shellfish. Ah’m telling you, it’s a clambake down there.”

“Besides,” says Ed, “I doubt many cod are feasting on lobster anyway. In my thirty years of trawling and skinning cod—thousands of fish—I only found one lobster in the stomach of a cod. Go figure.”

“Maybe so. But all the groundfish in the Gulf of Maine—cod, haddock, pollock, redfish, halibut—add up to a lot of predators. They may not eat adult lobsters, but a three- or four-inch juvenile must be appealing. But lobsters aren’t hunted by all those groundfish like they use to be. That’s brought on the lobster bonanza. Lobster bottom is like a stadium full of Christians and no lions in sight.”

“I don’t know,” says Ed. “I’m more worried about the warming waters than the lack of predators. We’ve got too many lobsters, and the price suffers for it.”

“You’re not gonna preach that climate change bullshit, are you, Ed?” Before Ed can answer, Ketch trolls his eyes farther down the wharf. Along comes a young lobsterman named Kevin Joyce, wearing a Red Sox baseball cap. He doesn’t wave or hail Ketch or Ed or me. In Stonington, everyone’s family, and greetings rarely exceed a perfunctory grunt. Ketch sits down on the gunwale of his red boat, legs dangling over the wharf; Ed stands up to face him, joining the rest of us standing in a huddle—a half circle, with Ketch as the quarterback.

He throws the first pass. “We were just saying,” he tells Kevin, “that lobster is coming on strong, with few predators to keep ’em in check.”

“Maybe,” says Kevin. “Hard supposing. But I expect the size limits have something to do with the rush of lobster. We throw little lobsters back in the ocean. That’s gotta give some more time to breed. We spare the big lobsters, too. They the ones with the most juice. They make the most children.”

Ed nods his head at Kevin and picks up the ball. “The greatest help to the boom may be saving our egg-bearing females. I always said lobstermen love their mothers.”

“Ah-yuh,” says Ketch. “But what’s new today? Yer talking a century ago. Why have lobsters come on like gangbusters all of a sudden—in five or six years? It can’t be size limits, as wise as they are. If it’s not more breeding, it’s got to be a lack of dying—fewer teeth chasing after ’em.”

“Or else the water is changing,” Ed chimes in. “To a lobster, it’s pretty near a sauna out there. Maybe they’re breeding more because of it.”

“Heat’s been rising since the Civil War,” says Ketch.

Point taken. Both men know that seasonal temperatures—especially autumn and spring measurements—control the range of marine species and their migrations. Fishermen have seen the species profile of the Gulf change dramatically in the last decade. Their traps and nets are landing unfamiliar species. Northern shrimp have migrated from Maine into Canadian waters, canceling one fishery and enhancing another. Meanwhile, southern species like black sea bass are moving north of Cape Cod, new territory for them. Maine trawlers, opportunistic as ever, want to start a sea bass fishery. This may become important financially for fishermen in the southern stretch of the state. They have also seen the center point of the Maine lobster range shift from Portland to Down East, leaving southern lobstermen with near-empty traps.

If and when the bust does begin, a downturn predicted by most scientists, it will likely come in two waves. The first wave, the biological one, will be a direct result of poor settlement six to eight years before. Reduced settlement and landings will probably come from environmental factors, principally ocean warming.

The second wave, comprising harvest pressure, will add insult to injury. Due to inertia, it is possible fishermen will be slow to act upon the downturn. Instead, they may continue to fish at full throttle. When 3,822 active lobstermen each take eight hundred traps out on the Gulf of Maine, approximately three million traps splash into the water. While this level of fishing pressure has perhaps squared with a fishery posting landings of 120 million pounds, the same harvest pressure may overwhelm a reduced fishery of 60 to 90 million pounds (50 to 75 percent of the 2015 catch). Overfishing may ensue and the already depressed population may go into a tailspin. Admittedly, landings are a poor measure of population abundance. As the resource becomes rarer, the price per pound increases, fishing intensifies, and the fishery moves closer to a tipping point. This is what happened in Long Island Sound: A boom was tripped up by biological (and ocean-warming) forces, and then overfishing provided the coup de grâce.

Maine also has seen this duality before, though usually in reverse order. For both cod and northern shrimp, overfishing brought the stocks down to a crisis point first; then ocean warming kept them low.

“This may be the story of many modern fisheries,” says Bob Steneck in his office at Darling Marine Center. Like 98 percent of scientists globally, Steneck recognizes the seriousness of climate change.

“In the Gulf of Maine,” echoes Rick Wahle in the next room, “marine species are feeling the heat, so to speak. We can’t control ocean warming, except globally. However, fishermen can control the level of exploitation, if they choose. Typically, only a minor cut or limitation is put in place. The irony is that this might not be enough to stop local extinction of a fishery. Ocean warming coupled with insufficient catch limits may be too big a combined threat.”

One wonders whether, during the early days of the decimation of cod or hake or pollock, or northern shrimp or sea urchins, the fishermen saw it coming. Did Ketch and Ed anticipate the end of the line? Were there early telltale signs of the crash? Were captains observant? Or did fishermen just wake one day to empty nets?

To be certain, it will take prescient and enlightened minds to manage Maine’s last great fishery correctly. Right now, during the boom, little management is required. There are plenty of lobsters to fish. Yet the bonanza has a mind of its own. The day of reckoning may be coming.

Excerpt from "The Last Lobster: Boom or Bust for Maine's Greatest Fishery?" by Christopher White. Copyright © 2018 by the author and reprinted with permission of St. Martin's Press, LLC.

Christopher White has written numerous books, including "Skipjack: The Story of America’s Last Sailing Oystermen" and "The Melting World: A Journey Across America’s Vanishing Glaciers." His articles have appeared in Audubon, The Baltimore Sun, The New Mexican, National Geographic, and Exploration. He grew up on the shores of the Chesapeake Bay. Visit him at www.christopherwhitebooks.com.