What's next for Trump after G7: A supervillain alliance with Kim Jong-un, Xi Jinping and Putin? 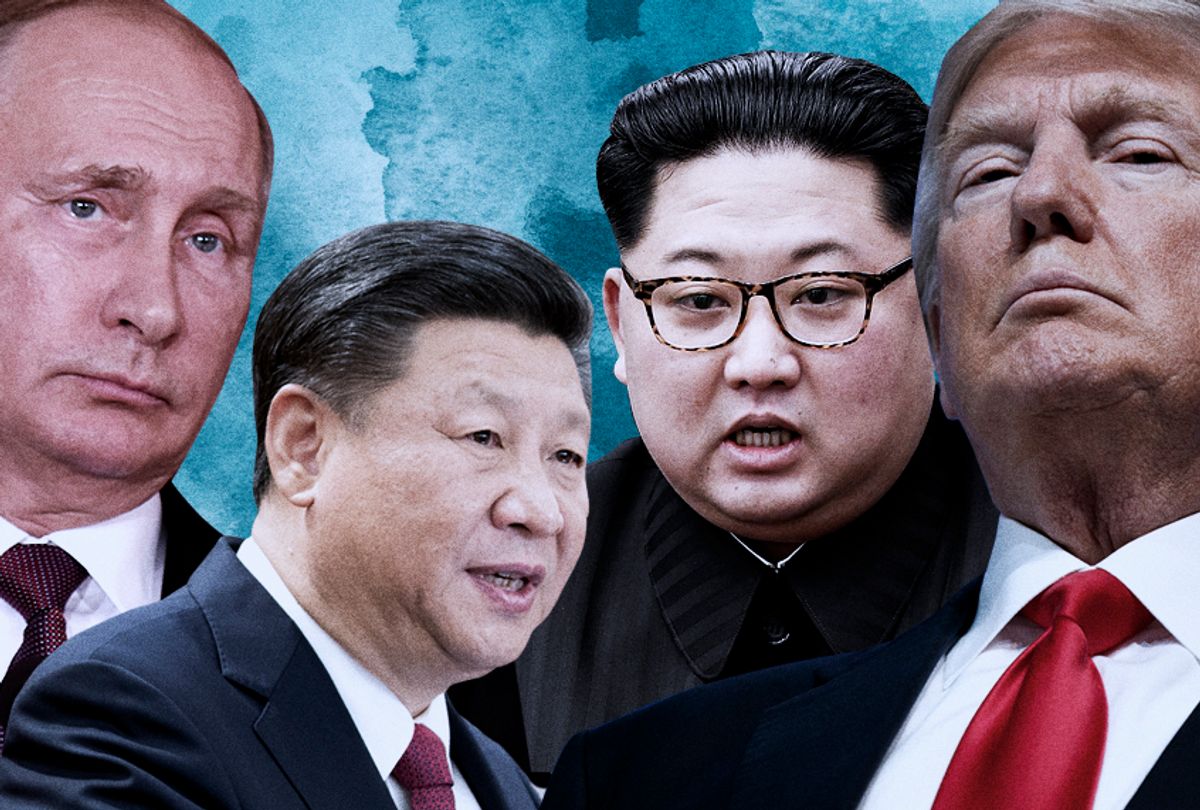 Covering Trump news every day feels similar to leaning too far back in your chair and catching yourself at the last second, just as you're about to fall backward and break your neck. Mainly it’s the awkward, unnerving uncertainty that goes along with having a foreign policy novice running a third of the federal government and representing us on the world stage, while not demonstrating even the slightest interest in learning how to do either of those things correctly. Donald Trump is a monkey with a machine gun, and everyone seems to be caught in the crossfire.

Such was the case once again as Trump lumbered into the G7 summit in Quebec over the weekend, acting as though he’s the hotshot on the scene only to become the subject of worldwide ridicule and embarrassing our nation in the faces of our closest allies.

In addition to other amateur-hour gaffes, Trump was the only G7 member to show up late to a breakfast roundtable on gender equality. During an especially erratic press conference, he stood on foreign soil and criticized the American press while also blaming Russia’s invasion of Crimea on Barack Obama. He ultimately refused to sign the G7 communiqué and called upon the other leaders to reinstate Russia into the group, emphasizing how badly compromised by the Kremlin he appears to be.

Trump rated the success of the summit as a “10.” Because that’s just what he does.

But Trump's most egregious move was to continue his laughable-if-it-wasn’t-so-stupid attack against Canada and Prime Minister Justin Trudeau. After bugging out of the summit early so he could meet with North Korean leader Kim Jong-un in Singapore, leaving the younger, better-looking and more capable North American leader behind, Trump referred to Trudeau as “meek and mild” and “very dishonest & weak.”

Trump is treating the prime minister of our closest neighbor and ally -- an ally that took in hundreds of grounded airliners on 9/11 and has invariably stood with us in wartime -- as if he’s our enemy, while jetting off to treat one of our most dangerous enemies like an ally. Don’t believe me? Peter Navarro, one of Trump’s top economic advisers, said “there’s a special place in hell” for Trudeau. Not a word about Kim.

Amid his blame-Canada tweetstorm, Trump claimed that U.S. trade tariffs “are in response to [Trudeau's] of 270% on dairy!” Trump doesn’t know this because he probably hasn’t read the Trans-Pacific Partnership deal, but that treaty addressed and resolved the Canadian dairy issue, in part by augmenting U.S. dairy exports to Canada. But, yeah, Trump canceled our participation in the pact. Oops. Richard Haass, president of the Council on Foreign Relations, noted that U.S.-Canadian trade is more or less balanced, and that dairy represents a minuscule percentage of that trade.

All told, we can safely assume that Trump’s base believes Trudeau is an enemy of the “America first” agenda, even though Trump’s grievances about Canada are almost entirely made up. Again, we’re talking about Canada. We’re also talking about an American president with a brainwashed, cult-like following, who has abandoned traditional governing in lieu of trolling and disruption. As long as the Red Hats keep chanting, Trump will keep dishing out the madness.

So where the hell do we go from here?

What’s become abundantly clear is that Trump’s well-documented fascination with overseas despots and dictators is emerging as a prime animator of his erratic, greenhorn foreign policy agenda. Trump appears to be actively penalizing and ostracizing our allies while tripping over his own tiny feet to appease our most brutal adversaries.

We’ve already observed his bootlicking of Vladimir Putin, and this week we can expect to see plenty of thumbs-up photo ops with Kim Jong-un, who is currently starving his people and has assassinated members of his own family using, shall we say, unconventional execution methods. This is who Trump bailed out on the G7 for. It’d be entirely in character for Trump to make up for the lost alliances by cutting deals with Putin, President Xi Jinping of China, Recep Tayyip Erdogan of Turkey, Rodrigo Duterte of the Philippines and others -- forming a sort of real-world Legion of Doom, with Trump as the costumed supervillain at the head of the table.

As Trump continues to allow nations like Russia to burrow into our national sovereignty, and as he prepares to negotiate with North Korea without any preparation (so he says) or any actual experts in the room, we ought to prepare ourselves for a slow entry into a pitch-dark corridor within an already dark presidential ride.

Frankly, we don’t know what will happen next because no president has ever behaved like this toward our allies. But we’ve observed similar behavior in other nations, most notably Russia and North Korea, as societal and political norms disintegrate under the weight of autocratic populists or soulless man-children who have no business leading a circus sideshow, much less an economic superpower. In these instances, the free world has often stepped up to apply sanctions against those regimes until the resulting cracks become too large to escape. And it’s all too easy right now to imagine a harrowing path that could include Western allies sanctioning the United States until, I don’t know, 40 percent of voters get kicked in the head by a mule, snapping them out of their hypnotic torpor.

Anti-American sanctions might sound like an extreme forecast -- until we begin to look at how our relationships are being crushed under the ponderous weight of Trumpism. The thing with trade is that when we stop trading, we start fighting. We’ve already stepped away from agreements like TPP and, likely soon, NAFTA. Now, Trump is yanking all the wires out of our one-on-one trade pacts, like a meth addict tweaking a VCR.

So let’s say Trump ends all trade with the G7 and other friendlies. They retaliate. Then, as we’ve observed, the Red Hats demand blood. Trump obliges and continues to insult and threaten our allies. Left without further recourse, sanctions or even regime change is discussed behind closed doors. The alternative, if you’re Canada, Germany, France, Japan or the UK, is to do nothing and hope American voters wise up (good luck with that), or to hope that Trump doesn’t continue to get more petulant, unpredictable or dangerous to the lives and well-being of world citizens and the prospects of continued peace. Trump’s spooning with Putin is especially threatening, given that American elections aren’t Putin’s only target. Just ask French President Emmanuel Macron.

Those of you who might be scurrying to the comments to tell me that I’m being an alarmist need to answer one question: What gives you the impression that Trump deserves the benefit of the doubt -- the latitude to miraculously pivot toward doing the right thing? We’d do well to prepare for the worst while hoping for the best. Nothing to date has given us any reason to believe Trump will ever de-escalate or repair any of the damage he has done. Indeed, everything we’ve observed so far suggests that Trump will continue to increase the loudness and frequency of his attacks, hardening the alienation and discontent of our soon-to-be former allies.