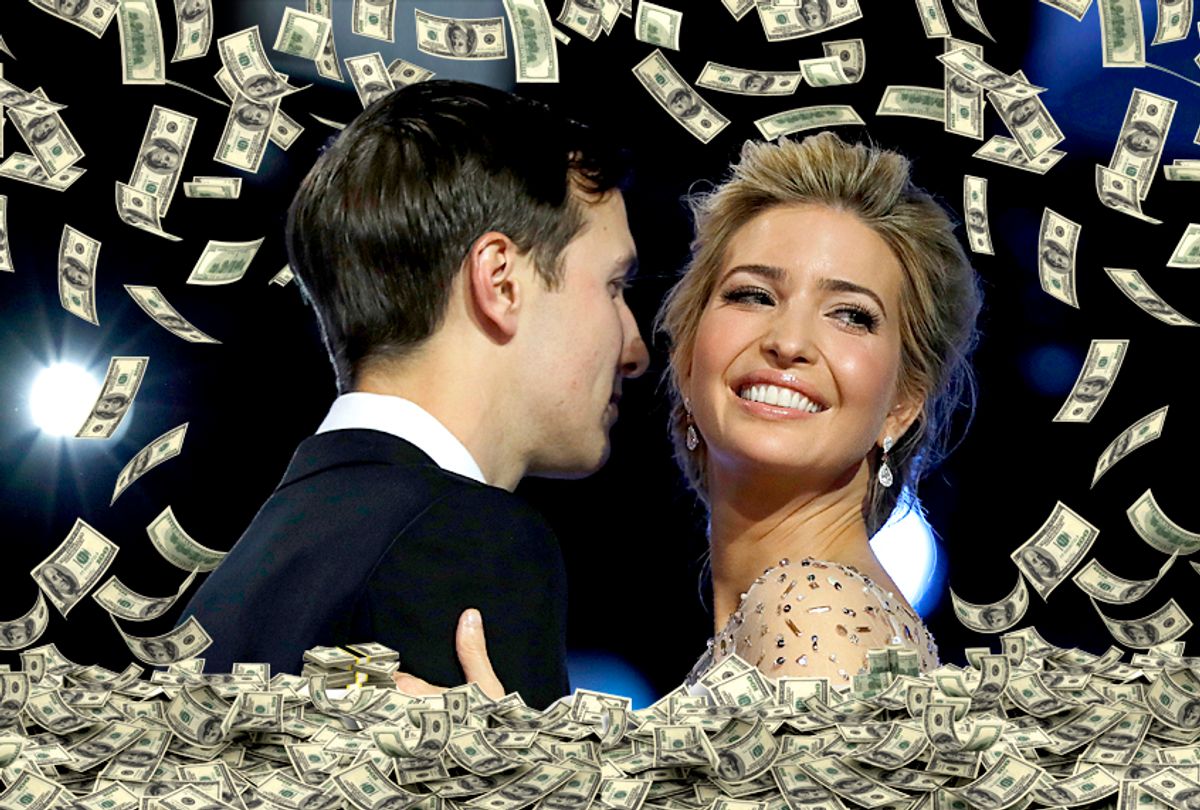 Financial disclosure forms logging a long list of fashion, investment and real estate assets show that Ivanka Trump and Jared Kushner have increased their wealth. The daughter and son-in-law of President Donald Trump also serve as senior advisers to his White House.

The forms, issued late Monday by 1600 Pennsylvania Avenue, disclose that Kushner held assets totaling at least $181 million, according to NBC News. In April 2017, Kushner last revealed assets in at least the $140 million range.

The first daughter held assets of at least $55 million by the end of 2017, which could total more than $75 million, a source familiar with the disclosures told CNN Money.

The majority of Ivanka Trump's assets, which are worth more than $50 million, were kept in a trust that holds her business and corporations. That trust generated more than $5 million in revenue last year.

A spokesperson for Abbe Lowell, the ethics counsel for Kushner and Ivanka Trump, said the couple's filing showed that both assets and debts had not changed much during the past year. The spokesperson also made a point to state that the pair had complied with all federal ethics rules.

"Since joining the administration, Mr. Kushner and Ms. Trump have complied with the rules and restrictions as set out by the Office of Government Ethics," said spokesman Peter Mirijanian. "As to the current filing, which OGE also reviews, their net worth remains largely the same, with changes reflecting more the way the form requires disclosure than any substantial difference in assets or liabilities."

Ivanka Trump earned at least $82 million in income in 2017, while Kushner's filing reported many of the same income sources and amounts, according to CNN Money.

"For one, some line items appear on both Kushner and Ivanka Trump's filings. It's also impossible to calculate precise totals of income and assets because the documents — which are used throughout government — ask officeholders to disclose figures in ranges, such as '$100,000 to $1,000,000.' Some disclosures are open ended, like 'over $50,000,000,'" the news organization reported.

The Trump family's foreign business dealings – and the potential conflicts of interest they present – have been a source of concern and controversy ever since Trump's inauguration in 2017. The president has resigned from his namesake company, the Trump Organization, and has turned over the operation of his business to his two eldest sons, Donald Jr. and Eric.

Since the election, Kushner and Ivanka Trump have also stepped away from the management of their businesses, although they have retained numerous ownership stakes. While they are not legally required to sell all their assets in order to work at the White House, rules prohibit federal employees from participating in matters in which they have a financial interest.

Ivanka Trump disclosed on her filings that she had secured trademarks related to her name and initials registered around the world, including in Brazil, China, Mexico, Mexico, the Philippines, Qatar, Russia, Saudi Arabia and the United Arab Emirates, according to CNN Money.

The first daughter also recently obtained seven new trademarks in China as her father continues to negotiate trade with Beijing, resulting in criticism from some ethics experts. The president of the Ivanka Trump brand has said in a statement that the fashion line regularly files for trademarks, "especially in regions where trademark infringement is rampant."

The filings are currently under review by the Office of Government Ethics and require certification from the agency.