AI can evaluate how societies change under stress

Religion is uniquely human, but computer simulations may help us understand religious behavior 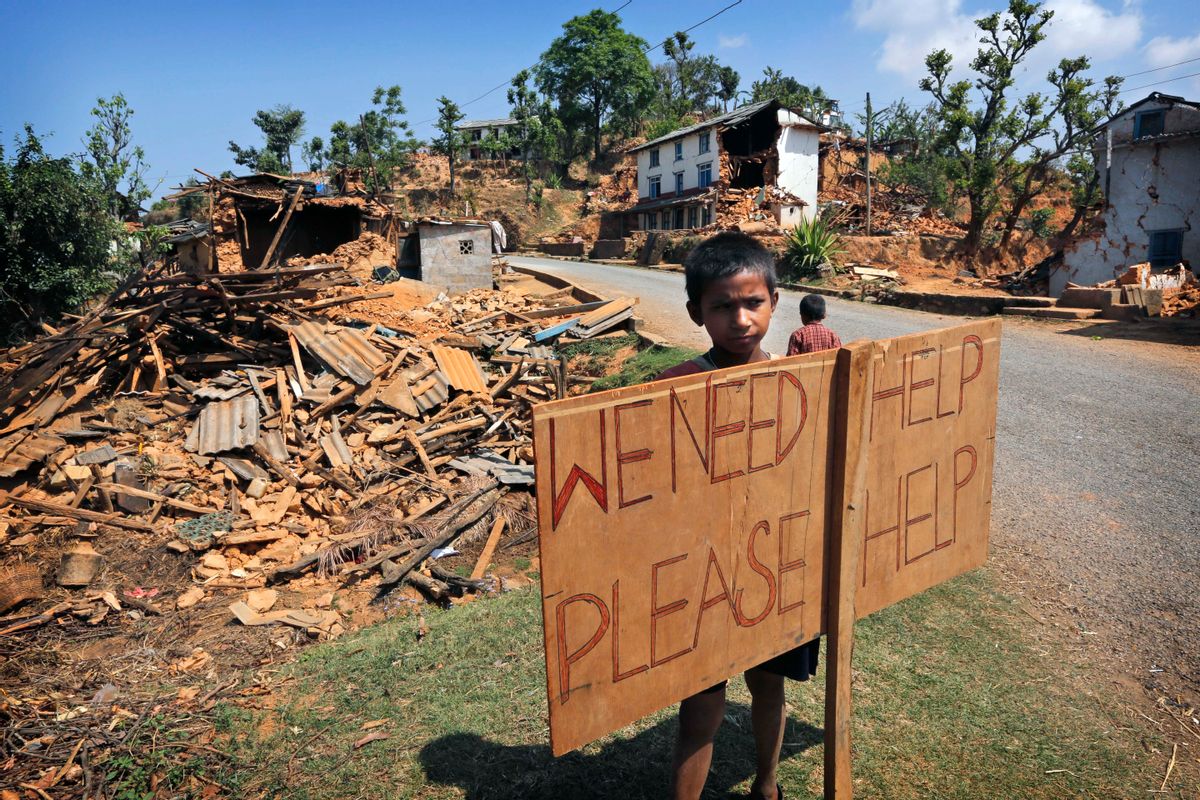 FILE - In this May 2, 2015 file photo, a Nepalese boy stands outside his village with a signboard asking for help in Pauwathok village, Sindhupalchok district, Nepal. A year after a set of devastating earthquakes plunged Nepal into chaos and economic decline, one question remains on everyones mind: what if it happens again? Scientists have been warning Nepal and other Himalayan countries for years that quake risks in the region are high. But while citizens are preparing for the worst by building sturdier homes and stockpiling emergency supplies, experts say officials still have a long way to go in preparing for possible, if not probable, disaster. (AP Photo/Manish Swarup, File) (AP)
--

When disaster strikes, people often turn to religion for comfort and support. A powerful recent example of this comes from a study called “Faith after an Earthquake,” by prominent New Zealand religion and society researchers Chris Sibley and Joseph Bulbulia. They document an uptick in religious service attendance in the city of Christchurch, New Zealand, after a large and deadly earthquake in early 2011 — even as New Zealanders as a whole went to church less. Eventually, though, things reverted to the way they had been, with religion in decline even in Christchurch.

As a scholar of religion, I found this striking because of the particular rigor of their research: The quake happened between installments of surveys in a long-term study about New Zealanders’ attitudes, values and religious beliefs. The results from 2009, before the quake, and in 2011, after it happened, let researchers observe the same individuals before and after the natural disaster. The findings showed that people living near the earthquake, whether religious or not before the event, became more religious in the wake of the tragedy, at least for a while.

I’m hardly alone in wondering what in human nature causes this to happen. One of my research teams uses computers to study how religion interacts with complex human minds, including in processes such as managing reactions to terrifying events. It’s quite common for engineers to use computational models to run virtual experiments — say, to make sure a bridge will stand up to a major hurricane — because it’s a lot cheaper and safer. We’re working to build a computational model whose virtual humans behave the way living humans do when they’re under threat.

Let’s face it, people often react in scary ways to terrifying events: They lash out, blame innocent people, escape from stress into self-protective hibernation or launch wars. Some people turn to religion for comfort, and some use religion to justify their scary behavior. It would be nice to know more about how this psycho-social system works.

Like those engineers who want to see how a bridge will move in high winds, my team’s work, part of an effort called the Modeling Religion Project, uses computational models to evaluate how societies change under stress. We have collaborators at the Center for Mind and Culture in Boston; the Virginia Modeling, Analysis and Simulation Center at Old Dominion University; and the University of Agder in Kristiansand, Norway. We have received financial support from the John Templeton Foundation.

Our team starts with the understanding that many aspects of human life, including religion, are extremely complex systems. Individuals’ activities, emotions and religious beliefs have far-reaching effects. Collectively, they influence global trends such as shifts in political power, declarations of war or the very organization of civilization itself. Even something as personal as deciding whether to have a child, when viewed across a society, can add up to a shift in population growth. Our team hasn’t yet identified connections that would allow us to make a lot of useful predictions, but we’re working on it.

Our research strategy is to use one complex system — a virtual environment in a computer — to study the real world’s complex systems, focusing on those in which religion plays a role. One example is the terror management system, which psychologists use to explain how people manage their reactions to terrifying events such as natural disasters, infectious disease outbreaks or social threats from outsiders. Religious beliefs and behaviors can play key roles.

The researchers in New Zealand suggest that religion directly comforts people who are suffering or reminds them of the resilience of others who suffered greatly too, like Jesus on the cross or martyrs who were tortured. The human approach to processing terrifying events involves an exquisitely complex system of deeply intuitive human responses to emotional, social and environmental threats and uncertainties.

To explore these human dynamics with a computer, we designed an artificial world populated by a large number of computer-controlled characters, called “agents.” The agents are programmed to follow rules and tendencies identified in humans through psychological experiments, ethnographic observation and social analysis. These include rules such as “seek comfort and protection when I’m frightened.” Then we watched for what happens in the artificial society — like whether the agents’ religious participation rises in the wake of a terrifying disaster.

As we build these agents and the artificial societies they inhabit, we test them against well-known real-world examples, such as the data gathered on church attendance before and after the Christchurch earthquake. The better our agents mimic the behavior of real humans in those sorts of circumstances, the more closely aligned the model is with reality, and the more comfortable we are saying humans are likely to behave the way the agents did in new and unexplored situations.

This artificial society is a simplified model of human society, but a reasonable facsimile in the respects that matter for making sense of reactions to terrifying events. One useful difference is that we can experiment with the artificial society. We can run all sorts of virtual “what-if” experiments: What happens to religious participation and personal prayer if the frequency of natural disasters increases? Is violence unleashed if a society is flooded with refugees from a foreign religious culture? Could we hold violent tendencies in check by training people to be less sensitive to perceived threats from unfamiliar people?

Experimenting in an artificial society

In one of our experiments, we watched the agents’ strength of religious conviction over time to see when it stayed constant, increased, decreased or fluctuated in a cycle. We set up a virtual world populated with 1,000 agents and gave them some rules (such as “band together when under threat”), some chance events (a disease outbreak or a natural disaster) and some settings our research team could customize each time we ran the simulation (such as how quickly agent anxiety eases over time). Over the course of weeks, we ran the simulation millions of times with a wide range of variations in model settings and evaluated the resulting data.

We found that both individual characteristics and environmental events affected the strength of an agent’s religious conviction. For instance, some agents got bored with religious rituals more quickly than others. Other factors included the severity and frequency of hazards such as dangerous earthquakes or disease outbreaks.

In the model’s virtual world, we also saw patterns in how different types of groups use religious rituals to manage their terror. Culturally diverse groups whose members dealt with hazards fairly well preferred coping through rituals with small groups of friends, which were unlikely to explode in violence. But culturally homogeneous populations whose members had low tolerance for hazards preferred rituals on a very large scale, and those kinds of rituals had the potential to be quite dangerous. Obviously there were real-world factors we didn’t simulate, but that sounds like what has been happening in the Kashmir region of India, in which massive funerals lead to demonstrations and feed a militant uprising. And it’s like the periodic explosions of violence against Jews when medieval Christians celebrated Easter in vast processions. It’s not difficult to think of other examples: They occur on a tragically frequent basis.

Our approach can’t predict all of human behavior — nor even all religious behavior by people in the face of natural disasters. But it does generate important insights and predictions that future research can test — such as how group diversity and different coping strategies might yield different results. Human simulation in action is messier than modeling bridges, but it can be a useful way for researchers to understand just why people behave the way they do.