The bizarre propaganda video touts Trump as a hero; some say it mimics Scientology recruitment video 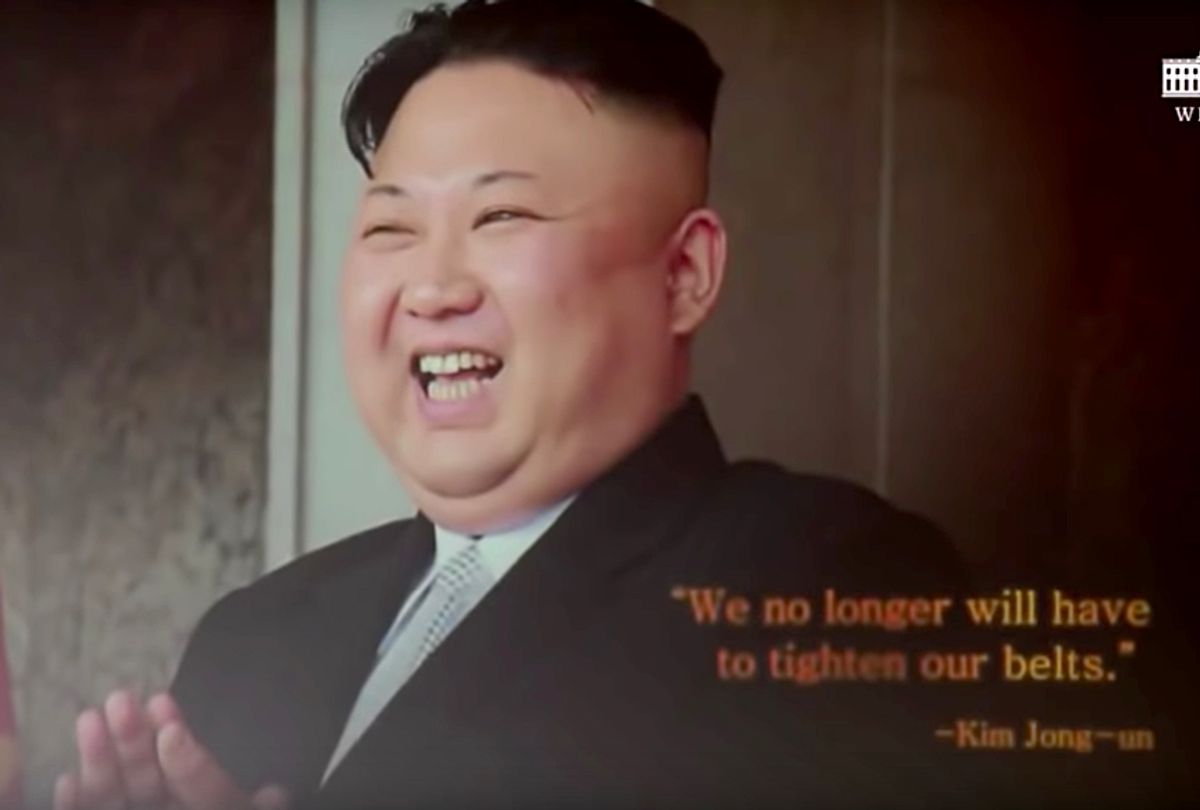 What is Donald Trump’s art of the deal when it comes to negotiating denuclearization with North Korean leader Kim Jong-un? A fake movie trailer, it turns out.

Reports surfaced on Tuesday that during Trump and Kim's historic deal-making summit in Singapore, a key portion of Trump’s pitch consisted of a middling propaganda video. Reporters viewed the video before Trump addressed reporters, telling them that the meeting was “honest, direct and productive.”

The four-minute video opens with the credits, “a Destiny Pictures production,” and cuts to an image of Earth from space. A narrator wielding a standard dramatic movie trailer voice begins the bizarre commentary, ostensibly showing Kim what denuclearization would look like. Thanks to Gizmodo, there is now a full transcription of the voiceover, but here are some excerpts that stood out:

Destiny Pictures presents a story of opportunity. A new story, a new beginning. One of peace. Two men, two leaders, one destiny. A story about a special moment in time, when a man is presented with one chance which may never be repeated. What will he choose? To show vision and leadership? Or not?

There can only be two results. One of moving back. Or one of moving forward. A new world can begin today. One of friendship, respect, and goodwill. Be part of that world, where the doors of opportunity are ready to be opened—investment from around the world, where you can have medical breakthroughs, an abundance of resources, innovative technology, and new discoveries.

Featuring President Donald Trump and Chairman Kim Jong Un.... in a meeting to remake history. To shine in the sun. One moment, one choice, what if? The future remains to be written.

The narration flashes between images of Americans creating the “innovative technology” and “new discoveries” the video speaks of, and North Koreans looking famished and/or happy. It clearly is meant to depict how North Korea has been slow to adopt Western-style capitalist values, suggesting that peace will lead to more resources and opportunity for the country.

Unsurprisingly, the video flatters Trump and describes him as one of the world’s leaders who “take actions that renew their homeland."

“My guess is that whoever made the video just used/ inserted ‘destiny’ metaphorically,” Castaldo told Salon in an email. “To convey what they wanted to see or what's in store for the future. That's my guess.”

The internet commentariat has had a lot to say about the head-scratching video. Some have noted how similar it is to Scientology recruitment videos, with its shots of rolling time-lapse clouds and Earth from space.

Others say it is “totalitarian kitsch.”

While NBC News' Monica Alba, quoted above, called the video "highly produced," others disagreed with that assessment of its production values.

The most surreal aspect of the "Destiny Pictures" video is how its presentation seems to reify the idea of Trump's presidency as comprehensible only as an extension of his reality show. As Salon writer Heather Digby Parton wrote, the summit appears to have been largely inconsequential from a foreign policy standpoint, and was mostly just another photo-op for Trump.

While Trump's hope was to get Kim to fully commit to denuclearization, Trump and Kim signed a throwaway “historic document” that only reaffirmed an agreement North Korea made with South Korea in April, in which North Korea promises to“work toward” denuclearization.

After reporters at the summit viewed the video, Trump explained that he showed the video to Kim on an iPad. It was meant to show him “what could happen," he explained.

“As an example, they have great beaches. You see that whenever they’re exploding their cannons into the ocean, right? I said, ‘Boy, look at that view. Wouldn’t that make a great condo behind … ?’ And I explained, I said, ‘You know, instead of doing that, you could have the best hotels in the world right there.’ Think of it from a real estate perspective,” he said.

There we have it. Trump was trying to persuade Kim to disarm his nukes by promising him condo developments on North Korea's beaches. No wonder this "deal" was so artless.