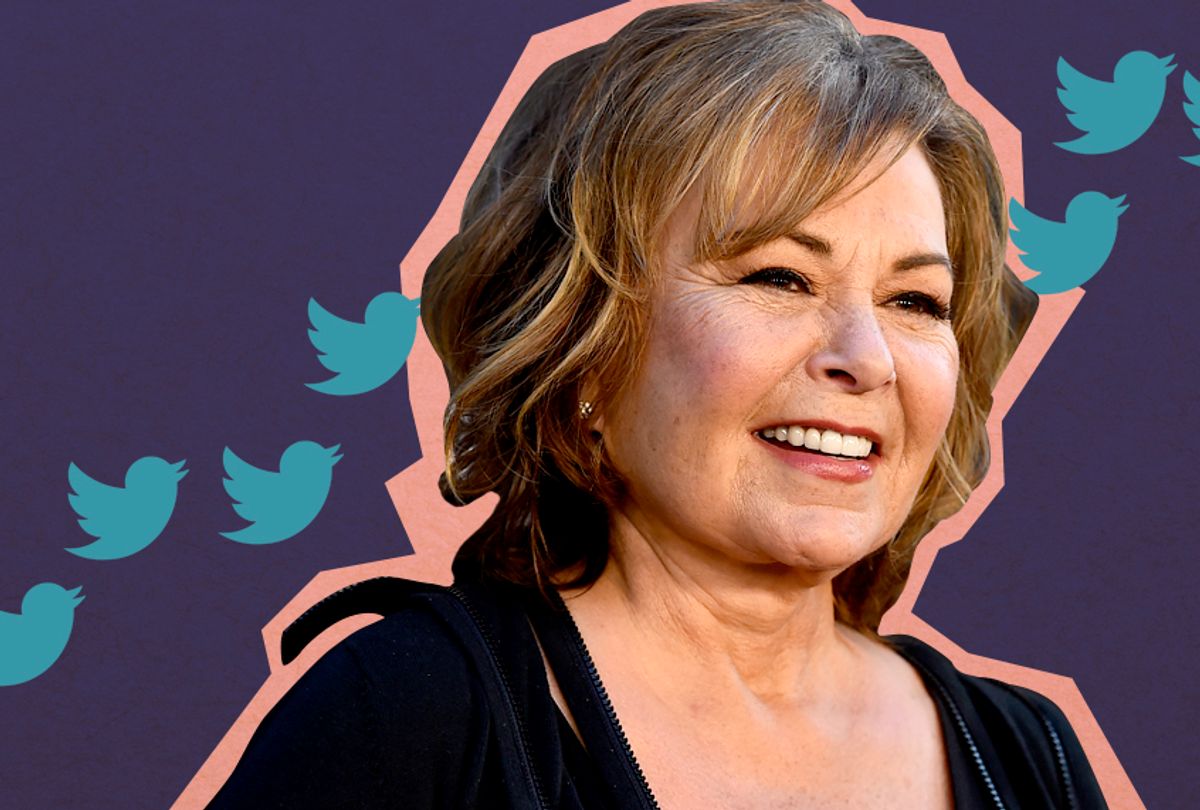 Roseanne Barr had a very active night on Twitter. It seems her strategy since being fired from ABC over her racist and vile tweets is to actually tweet a whole lot more.

Beginning at about 10 p.m. Wednesday night, Barr let her nearly 900,000 followers know that she is "fine" and has been using her time to "reflect" and "gain insight on what I said and how it was misunderstood."

In a tweet, Barr insisted that she is "NOT what people have accused me! I've never practiced 'RACISM' in my entire life & never will."

Seperately, she asserted that she has spent her entire life fighting for civil rights and against racism.

Then, Barr used language identical to President Donald Trump as she argued that anyone who does not understand her reasoning has a "low IQ."

"Rod Serling wrote Planet of The Apes," she said, referring to his adaptation of the 1968 film with Michael Wilson that is based on the novel by Pierre Boulle.

"It was about anti-semitism," Barr added. "That is what my tweet referred to-the anti semitism of the Iran deal. Low IQ ppl can think whatever they want."

ABC swiftly cancelled "Roseanne" after Barr wrote on Twitter last month that Valerie Jarrett, an African-American woman and former senior aide to President Barack Obama, was the offspring of the Muslim brotherhood and "Planet of the Apes."

Barr's original excuse for her overt racism was that she was tweeting was under the influence of the sleeping pill Ambien.

"While all pharmaceutical treatments have side effects, racism is not a known side effect of any Sanofi medication," the drug's manufacturer said at the time.

And, in case you were wondering, Barr provided an update on her use of Ambien in her Wednesday night tweet storm: She is learning to sleep without the medication now.

In an attempt to back up her claim that her slur against Jarrett was about the "anti-semitism of the Iran deal," Barr linked to a 2009 article from the magazine, Jewish Currents, which delved into Serling's background and the way he used his art to interrogate prejudice, racism and xenophobia.

Because of Barr's weaponization of the article, Jewish Currents added the following update Thursday to this nine-year-old piece:

Roseanne Barr linked to this article on June 14, 2018 in an apparent attempt to suggest that she is not a racist, after being fired from her namesake network TV show for a tweet likening former Obama aide Valerie Jarret to a character in the film 'The Planet of the Apes.' Nothing in this article suggests that that wasn't racist. To be clear, it was very racist.

Barr said in another tweet that she will "begin to speak for myself in media soon."

The actress also thanked comedian Rosie O'Donnell and Fox News' Sean Hannity, among others, "4 helping me when I was broken."

In addition to her original tweets, Barr also re-tweeted some fans who had asserted that she was treated unfairly by ABC and the American public. Is the actress more sorry that she had to face consequences for her racist words than for what she actually said?

Thursday morning, Barr continued to tweet. She said that she is an "advocate" for all "oppressed" people and "will always be 4 FREEDOM FROM MOB MENTALITY."

Despite promising to leave the social media platform, Barr's consistent Twitter presence seems to confirm that the actress has no plans to leave the public eye anytime soon.

And she reinforced her actions in words Thursday morning when she tweeted, "there's a lot more to say and believe me I will at the right time and the right place."

For the record, Barr also re-tweeted a birthday wish to the president and in addition to harmful and inflammatory propaganda about Palestinians.

There is much in common between Trump and Roseanne Barr, principally, their penchant for alternative facts.