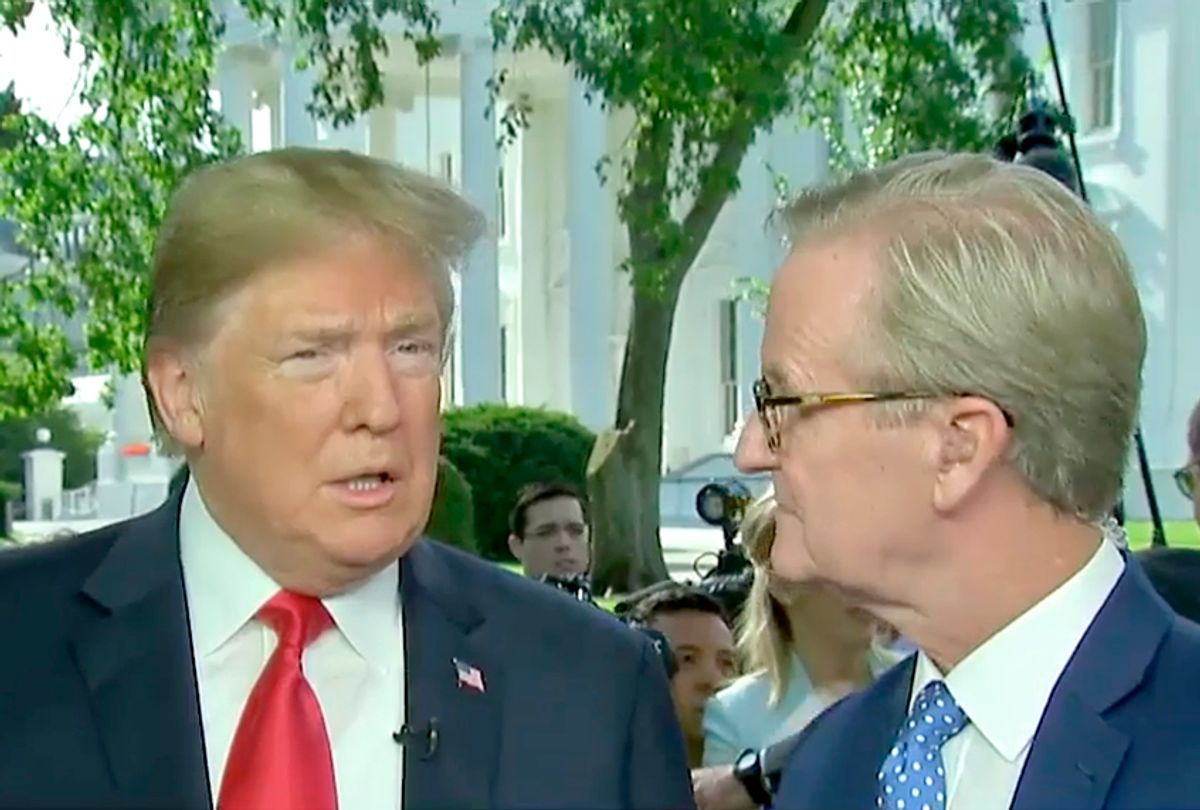 President Donald Trump on Friday went on the White House lawn and gave an absolutely bonkers impromptu press conference in which he spouted numerous falsehoods, absurdities and lies.

While it’s difficult to narrow down the craziest moments from the Trump press conference, here are seven particularly nutty moments.

“He’s the head of the country — and he’s the strong head, don’t let anyone think anything different,” Trump said during an interview with Fox News’ Steve Doocy. “He speaks and his people sit up in attention. I want my people to do the same.”

2.) Trump says he’s kissing up to Kim because he doesn’t want him to nuke the United States. When asked by a reporter why he praised Kim so much despite his atrocious human rights record, Trump said, “I don’t want to see a nuclear weapon destroy you and your family.”
3.) Trump lies about Democrats being responsible for his own administration’s policy of separating children from their families at the United States border. “Democrats forced that law on the nation,” Trump falsely claimed.
In reality, the separation of families is solely due to a policy change by Attorney General Jeff Sessions that insists on criminal prosecutions for any adults caught illegally entering the United States. Additionally, the administration is even separating children from people who are trying to legally enter the country through the asylum process.
4.) Trump says the DOJ Inspector General report “totally exonerates” him in the Mueller probe. In fact, the IG report had absolutely nothing to do with the Mueller probe or its findings.
5.) Trump says former campaign chairman Paul Manafort had “nothing” to do with his presidential campaign. Trump quickly backed off this statement by saying that Manafort only worked for his campaign for a “short period” of time. However, Manafort was essential to helping the Trump campaign secure delegates at the Republican National Convention in 2016, and he was present at the infamous Trump Tower meeting that Donald Trump Jr. arranged with Russian agents during the campaign.
6.) Trump says that “some people” say that former national security adviser Michael Flynn didn’t actually lie to the FBI. Trump himself has said that Flynn lied to the FBI and Flynn himself pleaded guilty to lying to the FBI last year.
7.) Blames Obama for “giving away” Crimea — and refuses to blame Russian President Vladimir Putin for illegally annexing it. Trump blamed his predecessor for Russia’s decision to annex Crimea from Ukraine, and he reiterated his call for Russia to be invited back to the G7.