Air pollution has an understudied impact on public health 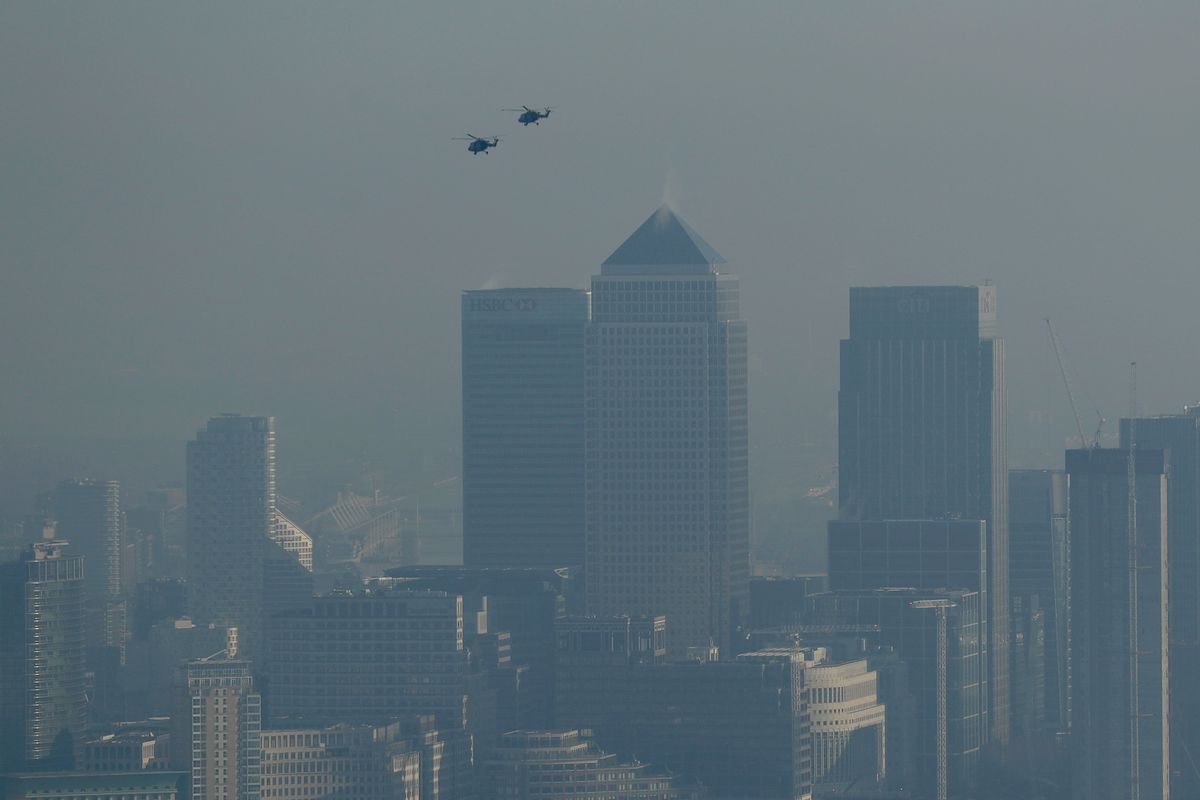 Helicopters fly through pollution over the Canary Wharf business district through a window in a viewing area of the 95-storey skyscraper The Shard, the tallest building in Britain at 309.6 metres, in London, Thursday, Jan. 19, 2017. Eight London boroughs issued high pollution warnings Thursday. (AP Photo/Matt Dunham) (AP)
--

The Dust Bowl in the 1930s was one of the worst environmental disasters of the 20th century. Intense dust storms relentlessly pounded the southern Great Plains of the United States, wreaking severe ecological damage, forcing 2.5 million people to leave the region and claiming unnumbered lives, mainly from “dust pneumonia.”

Research has shown that this disaster was fueled by a combination of severe droughts and over-cultivated lands. Today, climate change driven by human actions is enhancing the occurrence of droughts in multiple regions around the world.

As researchers working at the intersection of environmental health, air pollution and climate change, we wanted to know how increasing drought conditions and population growth in the U.S. Southwest could affect airborne dust levels and public health.

In a recently published study, we estimate that if the world stays on its current greenhouse gas emissions path, rising fine dust levels could increase premature deaths by 130 percent and triple hospitalizations due to fine dust exposure in this region.

If global greenhouse gas emissions are not sharply reduced, scientists project that the U.S. Southwest — already the nation’s hottest and driest region — will experience unprecedented multi-decade “mega-droughts” in the coming decades.

It is now well understood that short- and long-term exposures to airborne particles, including dust, pose major health risks. Effects range from increased hospital admissions to higher risk of premature death, primarily due to cardiovascular and respiratory disorders.

In our study, “dust” refers to soil-derived airborne particles generated by wind erosion or human activities, such as farming operations or travel on unpaved roads. Any soil particles smaller than 0.05 millimeters — roughly the width of a human hair — can be uplifted into the air. We focused on particles smaller than 0.0025 millimeters (2.5 microns), which are collectively known as “fine” particulate matter (PM). Particles this small stay in the air longer and cause the greatest harm to human health, since they can penetrate deep into the lungs.

Decades of epidemiological research have firmly established a link between exposure to fine PM and adverse health effects. Although more research is needed to differentiate between the potency and effects of various materials that make up fine PM, which also include emissions from fossil fuel combustion and other industrial sources, evidence suggests that dust is a significant contributor.

For example, silica, which makes up around 60 percent of windblown desert dust, is known to cause chronic lung inflammation, lung cancer and autoimmune diseases. Dust can also transport soil-borne pathogens and toxic contaminants over large areas. In the U.S. Southwest, dust episodes have been linked to outbreaks of valley fever and arsenic poisoning.

Dust and droughts in the U.S. Southwest

The southwestern United States, much of which consists of deserts and drylands, has the nation’s highest levels of airborne dust. The first question we investigated was how drought conditions occurring in different hydrologic systems, such as surface soils, river discharge areas and groundwater storage, have been influencing levels of airborne fine dust in recent years.

Indeed, we found that these changes were significantly correlated with soil moisture conditions across southwestern North America. Years with higher-than-normal fine dust levels were also marked by drier-than-normal soil moisture in areas spanning the Chihuahuan, Mojave and Sonoran deserts, the southern Great Plains and the Colorado Plateau.

In our next step, we quantified potential future changes in fine dust levels and associated public health impacts under two different climate change scenarios used in the Fifth Assessment Report of the Intergovernmental Panel on Climate Change. The so-called “worst-case” scenario in the report is characterized by unabated, increasing greenhouse gas emissions over time. In the “best-case” scenario, dramatic cuts in emissions are required to hold global warming below two degrees Celsius.

First, we used projections of temperature and precipitation for the years 2076-2095 from an ensemble of 22 climate models in conjunction with our derived dust-soil moisture relationships to quantify future changes in dust due to changing drought conditions under the two climate scenarios. Since there is variation among climate model projections, using a large group of them allows us to gauge the robustness of the results.

We then estimated the resulting public health impacts by applying relationships drawn from studies that have quantified increases in risk of premature deaths and hospitalizations in representative U.S. populations due to exposure to fine PM. In these calculations, we also took into account projections of population growth for the Southwest and changing vulnerability to disease.

Even under the best-case climate mitigation scenario, we project that fine dust levels in the region could increase by 10 percent. This rise would increase premature deaths and hospital admissions due to fine dust exposure by 20 percent and 60 percent respectively, compared to present-day values.

It is worth noting here that we only looked at the isolated effect of future drought conditions. Changes in other factors, such as wind speed and human land use, may enhance or dampen our results.

Dust and droughts are a global threat

Other researchers have found results similar to our study in other parts of the world. For example, researchers have shown that the occurrence of dust storms in China and Saudi Arabia is modulated by rainfall or soil moisture in surrounding regions, which include remote deserts and drylands.

Today, drylands compose 41 percent of the world’s total land area and are home to around 2.1 billion people. On the world’s current greenhouse gas emissions trajectory, droughts will intensify and drylands will expand in parts of South America, Africa, Australia and the Mediterranean. Our findings highlight the potential for climate change to worsen air quality problems in many populated arid regions around the world — one of the many threats posed by climate change to human health and well-being.